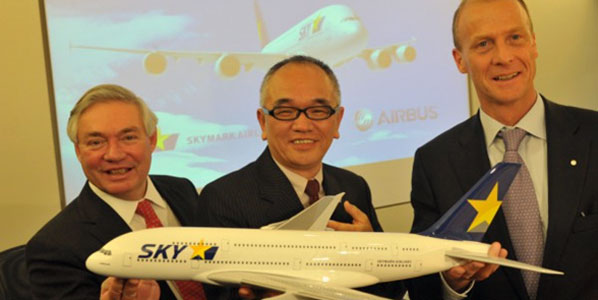 Airbus’ COO John Leahy; Skymark Airlines’ President, Shinichi Nishikubo; and Airbus’ CEO at the time, Thomas Enders, announced the A380 deal in early 2011. Skymark Airlines will become the first Japanese carrier to operate the Superjumbo – its first aircraft is due to be delivered in August 2014.

Launched back in 1998 shortly after the deregulation of the Japanese airline industry, Skymark Airlines operates a network of domestic services using its fleet of 31 737-800s. However, the 2011 deal with Airbus for the delivery of six A380s and a further lease agreement for seven A330-300s indicates the airline’s shift towards premium and long-haul services. It has already applied for traffic rights to fly to London Heathrow and New York JFK once the Superjumbos are delivered (August 2014 as of July 2013), while the A330s – scheduled to join Skymark’s fleet in 2014 and 2015 – will be used on domestic trunk routes.

According to a statement on the airline’s website, Skymark carried around 4.4 million passengers in 2012. 7.5 million seats were offered by the carrier over the same period of time, placing average load factors around the 58% mark – if true, not a great result for an LCC. 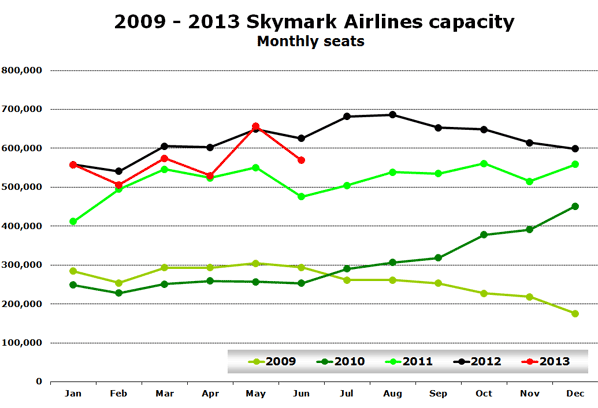 Skymark has been consistently increasing its capacity over the last five years, including the doubling of seats offered in 2011 when compared to 2010. Figures for the first six months of 2013 indicate downward capacity adjustments in the current year.

Examination of Innovata capacity data for August 2013 shows that Skymark operates to a total of 15 Japanese airports. Compared to the same period of 2012, the airline has withdrawn its presence from two airports – Osaka Kansai (previously served thrice-daily from Okinawa and Sapporo, and daily from Asahikawa) and Kitakyushu (daily from Okinawa and Tokyo Haneda). 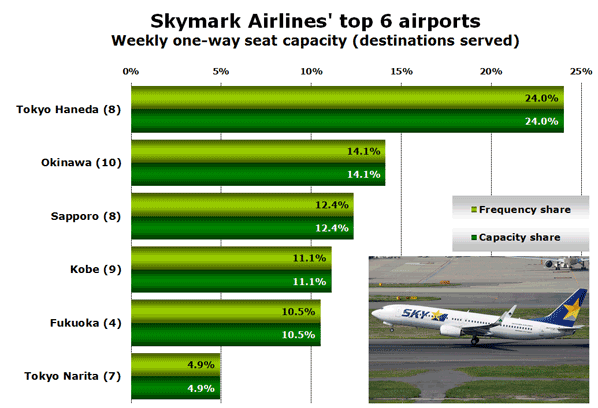 In August 2013, Tokyo Haneda remains Skymark’s largest operational airport, commanding 24% of the carrier’s frequencies and seats (as a result of the uniform fleet, both values are equal for all airports the airline operates to). However, it is the airline’s #2 airport, Okinawa, which has the most served destinations (10).

While Japan has seen significant activity from LCCs in the recent years, Skymark has largely been sheltered from their impact, at least on its largest routes. Instead, it competes primarily with Japan’s legacy carriers, with All Nippon Airways providing services on seven of Skymark’s top 10 routes, while Japan Airlines offers additional capacity on five of them.

Notably, Skymark is not the leading operator in any of its largest markets, except for the route from Kobe to Nagasaki, on which it is the sole capacity provider. Interestingly, the 400-kilometre route from Okinawa to Ishigaki, which launched last week with thrice-daily frequencies, is now Skymark’s seventh largest market.