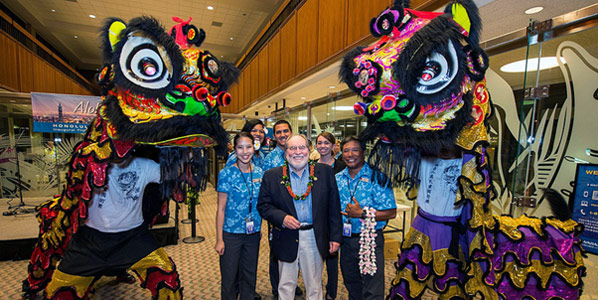 Taipei Taoyuan’s latest international route was Hawaiian Airlines’ thrice-weekly A330 service which started on 9 July. In the centre of the picture is Hawaii Governor Neil Abercrombie, who was one of several VIPs on the inaugural flight to Taipei.

The largest of Taiwan’s four international airports, Taipei Taoyuan International is the home hub for both China Airlines and EVA Air, the former being state-owned and the country’s largest carrier, while the latter is the #2 airline and is majority privately-owned. While Taipei City has a population of over two and a half million, the airport serves a conurbation of nearly seven million with international flights only, while Taipei Songshan is predominantly a domestic airport with limited regional flights to China, Japan and South Korea only. 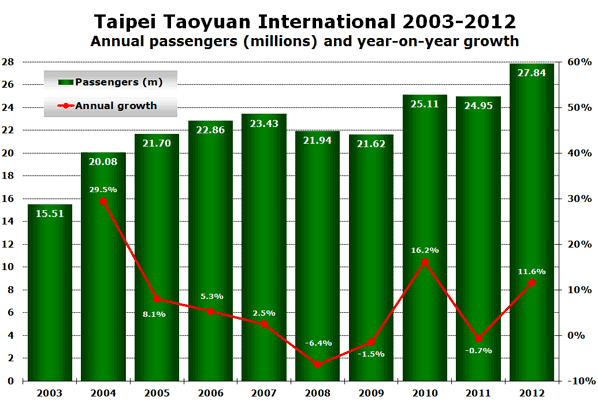 Despite some single digit traffic falls on three occasions in the past ten years, the airport’s significant growth trajectory is undeniable. Indeed, if the 8% growth which has been recorded so far (January to May figures) during 2013 is maintained, Taiwan’s biggest airport is likely to pass 30 million annual passengers for the first time, and in doing so, arguably enter the “big league” of global airports. If this annual traffic result is realised, then this will represent a near-doubling of passengers since 2003.

Entering Taipei Taoyuan’s monthly passenger data for 2012 into anna.aero’s Seasonal Variation in Demand (SVID) calculator, the airport performs exceptionally well, generating a score of 0.41, giving it an “excellent” rating. Against its fellow Taiwanese international airport peer Kaohsiung, its 2012 score is better than the second city (1.55 – excellent), which has over 70% of its flights derived from the international market. Perhaps more impressively, it also beats its ‘big’ neighbour of Hong Kong (just over 800 kilometres away), but which still posted another “excellent” result of 0.45. Since we started doing SVID scores, anna.aero has now evaluated nearly 50 airport’s seasonality performance for 2012, and Taipei Taoyuan has leapt into #4 spot overall, lodging itself between Beijing (0.38) and Abu Dhabi (0.44). 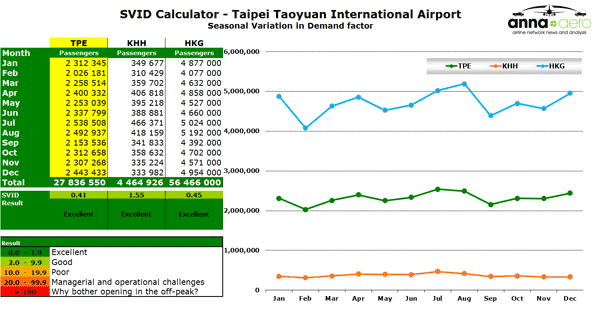 Unsurprisingly, Taiwan’s leading two airlines control capacity at Taipei Taoyuan, commanding nearly 50% of weekly flights and seats. Although both China Airlines (+12% weekly flights) and EVA Air (+11%) have delivered double-digit growth at the airport in the last twelve months, it is Mandarin Airlines which has provided the biggest increase in weekly flights (+39%). The China Airlines’ domestic and regional subsidiary has launched new flights to Ishigaki (twice-weekly) and Okinawa (four times weekly) in Japan, as well as Lijiang (thrice-weekly) in China. Profiled by anna.aero last week, TransAsia Airways is also growing fast at the airport, with 21% more flights available this August versus those offered for the same month last year. 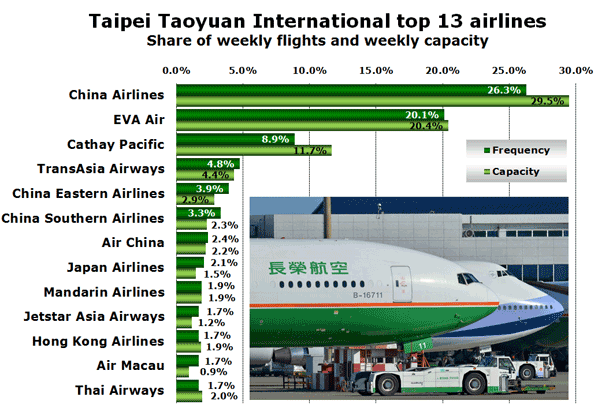 In the last 12 months, the capital city airport has gained a net of two extra airlines. Although not in the top 13 airlines, new arrivals include Scoot, Peach, AirAsia Japan, and from this week, Hawaiian Airlines, but in that time the airport has also lost the services of United Airlines and Jin Air, a LCC subsidiary owned by Korean Air. Currently the airport’s portfolio of 41 airlines is focused on Asia, with only four carriers coming from outside of the region – namely tigerair (formerly Tiger Airways – Australia), KLM (Netherlands) and Delta Air Lines and Hawaiian (US).

The fastest growing country being served from Taipei Taoyuan is Indonesia, which has grown by 53% when comparing data from 10-16 August in 2013 with the same week last year. While fellow incumbents EVA Air and Garuda Indonesia have maintained their respective weekly frequency (although the former has reduced its weekly seats by 4%), China Airlines has expanded hugely in the last 12 months, adding 19 extra weekly frequencies (up to 33 from 14) between the two countries, also resulting in a 110% increase in weekly seats for the airline.  In the last year the SkyTeam carrier has added nine weekly rotations on Taipei Taoyuan to Jakarta, five further weekly services to Denpasar, while Surabaya is a new destination with five weekly flights. In addition, flights to Thailand (+42% weekly flights) and Malaysia (+39%) have also shown a sharp spike in activity during the last 12 months. 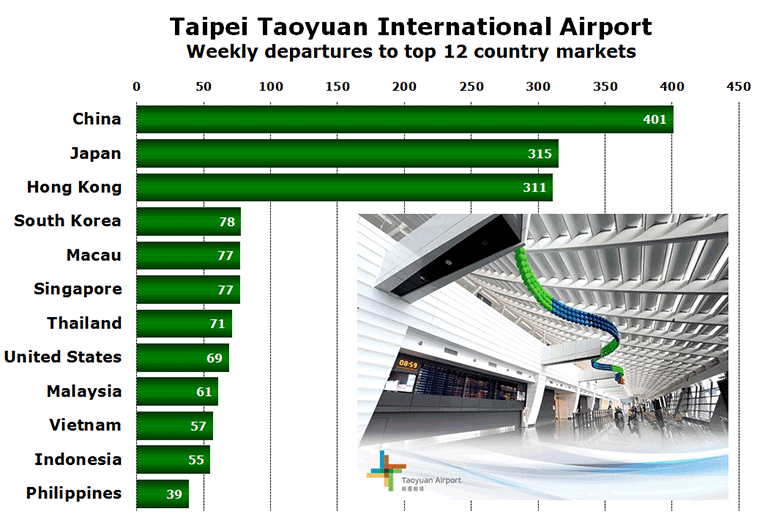 The top 12 countries represent 96% of all Taipei Taoyuan’s flights. In terms of flights outside of Asia, the United States is the only nation to break into the top 12, although Canada sits just outside in position #13. Only France and Germany are represented from the FIGUS countries (France, Italy, Germany, United Kingdom and Spain), although KLM’s daily service to Amsterdam in the Netherlands adds further representation for Europe.