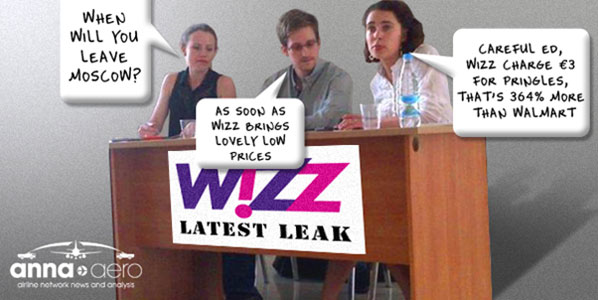 Those keen to fly out of the Russian capital will have another low-fares choice from September as Wizz Air breaks the Aeroflot monopoly on Moscow-Budapest services.

Wizz Air will announce this morning it plans to fly five-weekly to Moscow Vnukovo from Budapest, starting 23 September. Under the airline’s ‘Go East’ expansion, this takes the LCCs country market count up to 36. Wizz Air’s airport selection in Moscow will also offer potential passengers a choice of Russian capital entry points, as incumbent Aeroflot flies into its Moscow Sheremetyevo hub.

The Moscow route plan follows a flurry of Wizz Air new route announcements to a raft of new countries:

Moldova – Chisinau to Venice Treviso and Rome Ciampino from September 24

Egypt – Hurghada to Warsaw and Katowice from 31 October and from Budapest from 2 November.

Since Malév’s demise last February, Aeroflot has carved itself a cosy little monopoly route between Budapest and Moscow. Prior to the Hungarian flag carrier’s failure, it commanded 54% of weekly seats and 48% of weekly frequency.

Aeroflot has added capacity on the city pair since Malév’s collapse, providing three extra weekly frequencies to now offer double-daily coverage. Its seats have increased more significantly (+54%), as all flights are now operated (in the week stated below) by its 140-seat A320s, rather than in January last year when the majority of services (nine out of 11) were flown by its 116-seat A319s. Despite these increases, there has been a 30% reduction in the total seats available in the market.

Wizz Air’s arrival on the Budapest-Moscow market will mean that total capacity will rise past that which was available when Malév operated on the route. The LCCs market share in terms of weekly frequency will be 26%, but in terms of seats, given its higher density 180-seat A320, it will command 31%. Like easyJet’s arrival on the London-Moscow market earlier this year, Wizz Air’s touchdown in Russia will certainly shake-up the market mix on flights to central and eastern Europe, as the airline will undoubtedly want to ‘join-the-dots’ from its other bases in the region and challenge the incumbent carriers.

What the boss said

József Váradi, Chief Executive Officer of Wizz Air, said: “The opening of the Budapest-Moscow route is a landmark event for Wizz Air’s “Go East” expansion as it will make the airline’s debut in Russia. It also enhances Wizz Air’s position as the “home town airline” for Hungarians by offering more choices and more low fares to travelers. We remain highly committed to continue to develop our route network, to create new employment and engage with new business activities in Hungary as it would be expected from Hungary’s largest airline. We are thankful to the Hungarian government for supporting us in the route designation process.”