Offering the three essential ingredients (water arch, ribbon-cutting and cake) for any new route launch was American Eagle’s thrice daily Dallas/Fort Worth to Charleston service in June. The Texan hub is the regional brand’s second biggest hub, after Chicago O’Hare, but it is growing faster than its Illinois cousin so far in 2013.

There are currently five airlines operating under the American Eagle brand, including the Dallas/Fort Worth-based American Eagle Airlines (which operates 83% of flights under the brand), as well as Chautauqua Airlines (7.2%), SkyWest Airlines (5.2%), ExpressJet Airlines (4.3%) and Midwest Airlines (0.6%). Just 12 months ago, the latter three airlines were not flying under the brand, but now SkyWest operates 15 routes from Los Angeles, ExpressJet flies around 20 routes from Dallas/Fort Worth and Midwest just three routes from Chicago O’Hare. According to Innovata / Diio Mi data for 10-16 August, all five airlines will combine to operate close to 50% of all flights flown under the ‘AA’ code this summer. 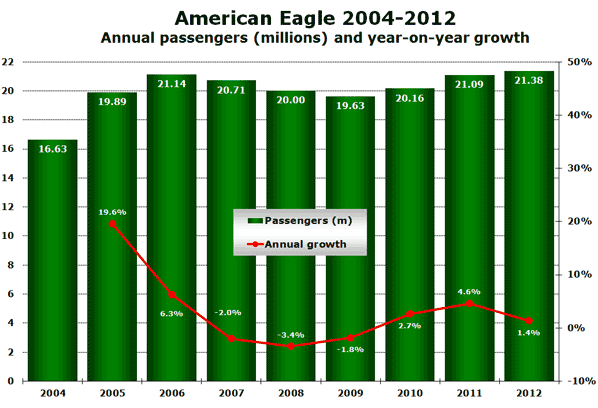 Looking at the total passenger traffic carried by the American Eagle brand since 2004, there have been seven airlines operating under this flag, with the only two constants being American Eagle Airlines and Chautauqua. While the regional brand surpassed its pre-economic crisis traffic levels recorded in 2006 last year, it will not be pushing this growth on in 2013, as passenger statistics indicate that  volumes for the rolling year until end-Q1 2013 are around 2% lower than the preceding 12 months.

Despite being the largest route operated by American Eagle, the Chicago O’Hare to Columbus route has actually seen its weekly frequencies cut by 11% when comparing a weekly schedule in August 2013 to the same week in 2012. Overall year-on-year capacity cuts are less than 1%, with only two of American Eagle’s top 12 routes experiencing schedule declines, with Chicago O’Hare to New York Newark joining the Columbus capacity cull. The fastest growing route from the top 12 is Dallas/Fort Worth to Northwest Arkansas, which has posted a 40% increase in the past 12 months.

The #5 largest route, Miami to Nassau, has changed operational hands in the last 12 months, with American Eagle Airlines replacing Executive Airlines, whose partnership with the brand was dissolved in April this year. American Eagle Airlines dominates the largest routes operated under the brand, with SkyWest being the first other operating airline to chart at #25 on its Los Angeles to San Diego route. 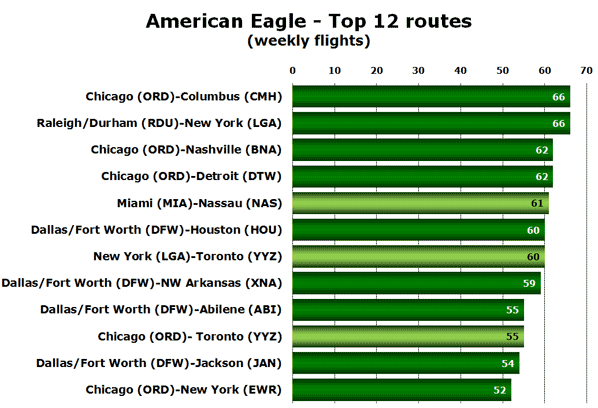 If this chart had been arranged by weekly seats rather than weekly flights, the top route (between Chicago O’Hare and Columbus) would only register as the #3 largest city pair. Based on capacity, the New York LaGuardia to Toronto route would steal the top spot, rising from seventh, and surprisingly making an international route American Eagle’s biggest, particularly as it only operates to four overseas country markets — Bahamas, Canada, Dominican Republic and Mexico.

The top 12 airports combine to provide nearly 55% of all of American Eagle’s weekly seats. Over the last 12 months, Chicago O’Hare has increased its weekly seat offer by 1% versus the same week last August, however the gap back to the #2 airport on the American Eagle network, Dallas/Fort Worth, has reduced, as the Texan airport has grown by 8% year-on-year. When considering the seats offered by mainline carrier, American Airlines, the two airport’s positions are reversed, with Dallas/Fort Worth being nearly three times larger than the Illinois hub. 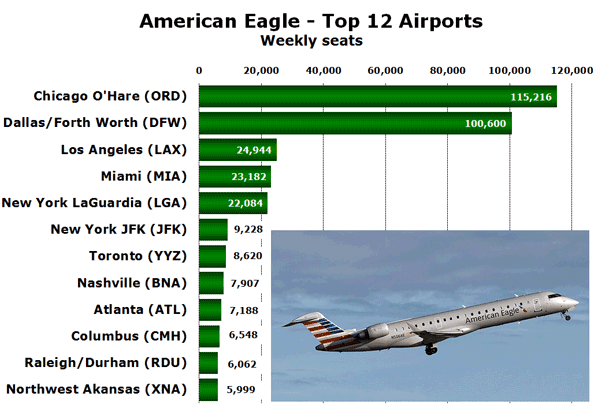 Raleigh/Durham has suffered the biggest capacity reductions, falling by 10% in the last year, despite a 10% increase in seats to New York LaGuardia. The mainline carrier now solely serves the North Carolina airport from its Chicago O’Hare hub, whereas in 2012 American Eagle had flown nearly 20% of all seats on the route. A 13% reduction in seats to Washington National has also added to the downward trend.