Boeing stays in the lead over Airbus as it delivers 60+ units in June; +6% more aircraft delivered in 2013 H1 The 200th A320 was received by the LATAM Airlines Group, the holding company for LAN and TAM Airlines, during Paris Air Show in mid-June. The aircraft is equipped with fuel-saving sharklets and is powered by CFM engines.

Following the good result achieved by the two manufacturers in May, with the second strongest month of 2013 in terms of aircraft delivered, Airbus and Boeing returned an impressive tally again last month, making it the best June since anna.aero began tracking deliveries in 2008. With the total aircraft deliveries standing at 48 and 61 respectively in June, Boeing bettered its performance as compared with June 2012 by 11 units, while Airbus noted a slight decrease of three airframes. Air New Zealand, the first carrier to commit to the sharklet following its launch by Airbus during the 2009 Dubai Air Show, took delivery of its first sharklet-equipped A320. The airline’s Chief Flight Operations and Safety Officer, David Morgan, officially accepted the aircraft during the Paris Air Show. 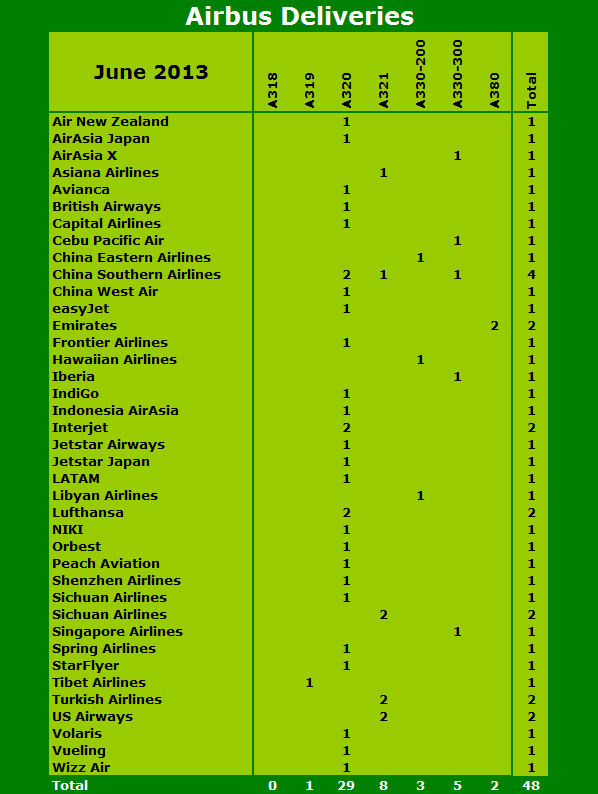 Airbus closed the month with a total of 48 delivered units, which constitutes three units more than the amount delivered in May 2013, but three less than in June last year. In the first six months of 2013, Airbus has delivered a total of 295 units, an increase of 6% on the same period of 2012.

Deliveries in June were yet again led by the A320 family, with a total of 38 single-aisle jets provided to airlines worldwide. A number of airlines received two narrow-body units from Airbus: China Southern Airlines, Interjet and Lufthansa (two A320s each), as well as Sichuan Airlines, Turkish Airlines and US Airways (two A321s each). A single A319 was delivered to Tibet Airlines.

Ten wide-bodies were delivered in June, one more than in the preceding month. The only airline to receive more than one wide-body was Emirates, which saw two A380s join its fleet for the second consecutive month. Cebu Pacific Air took delivery of the first of four A330-300s in a single-class layout, which will be used to launch the carrier’s new long-haul, low-fare operations. Lance Gokongwei, Cebu Pacific’s President and CEO, said: “The addition of the highly efficient A330 to our fleet ultimately translates to unbeatable operating costs, enabling us to offer the lowest possible fares to our guests. In addition, we will be the only Filipino carrier flying non-stop between Manila and Dubai, eliminating multiple stops or connecting flights.” Also in June, Libyan Airlines saw the first A330-200 join its fleet. 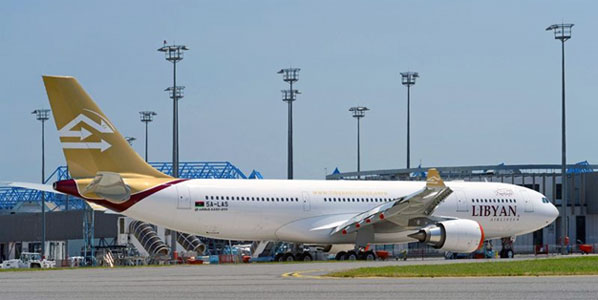 Libyan Airlines took delivery of its first A330-200 last month. Accommodating a two-class configuration of 24 business and 235 economy seats, the aircraft is powered by GE CF6-80 engines and will be deployed in the Middle East, around Dubai and Jeddah, as well as on Asian and European trunk routes. 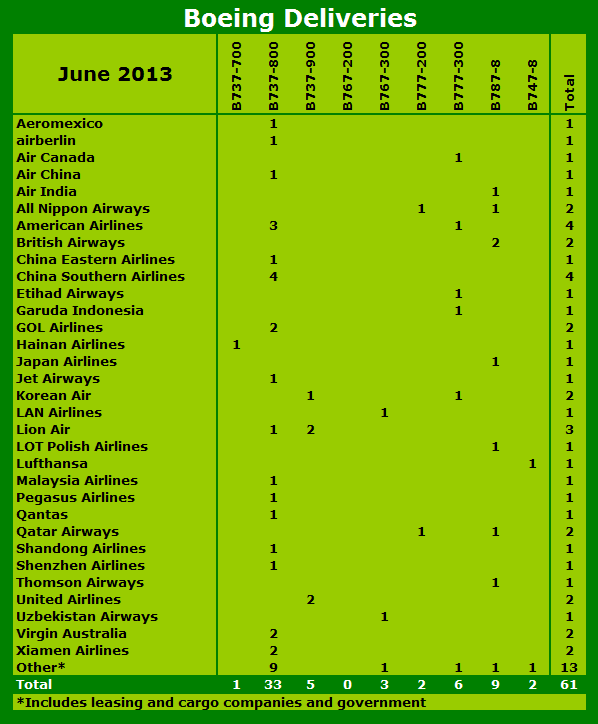 Airlines received a total of 39 narrow-bodies from the American airframer, one less than in the preceding month. China Southern Airlines and American Airlines were the largest recipients of the 737 family aircraft for the second consecutive month in June, as they took four and three aircraft respectively. Other carriers to receive more than one narrow-body unit from Boeing in June were GOL Airlines, Virgin Australia and Xiamen Airlines (two 737-800s each), as well as Lion Air and United Airlines (two 737-900s each). Hainan Airlines took delivery of one 737-700 in June.

Two less wide-body units were delivered in June 2013 than in May, but the US air framer bettered its year-on-year performance, delivering seven units more than the 15 it managed in June 2012. Following seven 787s delivered to customers in May, Boeing continued to clear the backlog in June with a total of nine units of the type reaching eight airlines. This includes two new 787 operators – British Airways and Norwegian (via ILFC lease). 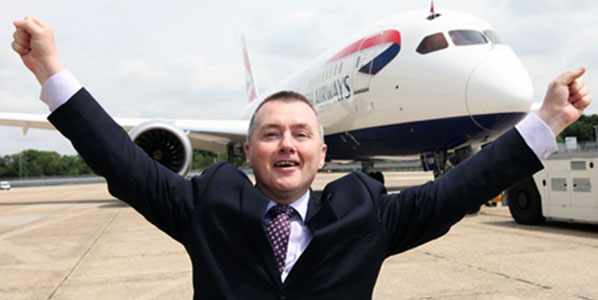 The arrival of British Airways’ first 787 Dreamliner was greeted by the apparently excited Willie Walsh, who said: "The 787 is a tremendous, innovative aircraft which sets new standards for environmental performance and operating efficiency and I'm sure British Airways' customers will love it!"