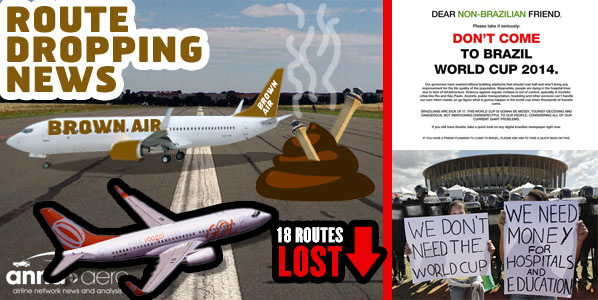 Own gol: anna.aero does not support a World Cup boycott – in fact we are big supporters of (well-managed) grand events which bring huge benefits to aviation and whole economies. The 18-route droppings we have identified at GOL began long before the recent riots and, while these too will impact air travel, we think the cuts are more symptomatic of enthusiastic over-expansion in Brazil’s over-heating economy.

Our recent analysis of the Brazilian aviation market revealed that GOL’s share of the domestic market as measured by RPKs (Revenue Passenger Kilometres) has been holding steady at around 35% for the last 18 months. This does not include the market share of WebJet, which GOL acquired in August 2011, but which ceased its own operations on 23 November 2012, as part of GOL’s plans to reduce domestic capacity. Domestic demand in Brazil has been stable, at best, in the first half of 2013, and GOL has cut capacity, measured by ASKs (Available Seat Kilometres), by 18% in January, 19% in February, 10% in March, 7% in April, 6% in May, and 4% in June.

Conversely, GOL’s international capacity (ASKs) rose by 34% in January, 30% in February, 38% in March, 31% in April, 39% in May and 32% in June. Network wide, in the first half of 2013, GOL’s ASKs are down 1.3%, RPKs are down 1.8% resulting in a load factor drop of 0.4 percentage points to 70.5%. However, of more significance to the airline, is a double-digit increase in PRASK (Passenger Revenue per Available Seat Kilometre) which is helping the airline to recover from a financially disappointing 2012, and could see the airline return to profitability in 2013. 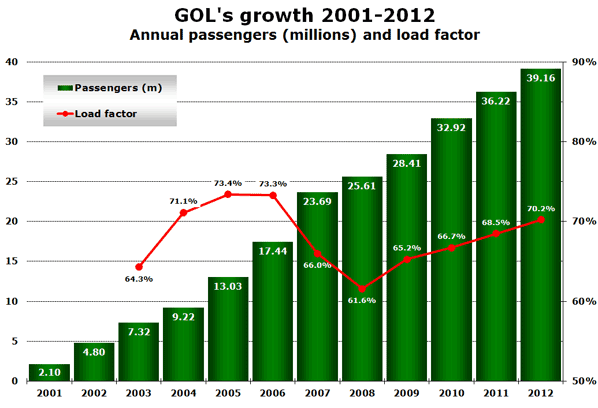 As part of the airline’s plan to return to profitability, a number of domestic (and international) routes have been withdrawn in the last 12 months. Our analysis of Innovata / Diio Mi data indicates that 11 domestic and seven international routes are no longer part of the airline’s route portfolio, compared with the same time last year. As a result of these network changes Panama City and Santiago de Chile are no longer served at all by GOL.

Looking at the combined schedules of GOL and Webjet for July 2012 and July 2013, reveals that the airline is planning to offer around 8% fewer flights, and around 6% less capacity. The difference between these two figures can be explained by GOL’s removal of Webjet’s smaller 737-300s from service at the end of last year. In terms of ASKs, the difference was down to just over 3%, thanks to the increase in average sector length.

GOL’s presence at Sao Paulo Guarulhos has grown by over 9% in the last year, which makes it similar in movements to archrival TAM at Brazil’s busiest airport, though around 8% smaller in terms of weekly seats. Of GOL’s 12 busiest airports this summer, just three have seen an increase in the number of flights. Apart from Guarulhos, GOL has also increased its activity at Recife and Florianopolis, though in both cases, by less than 3%. 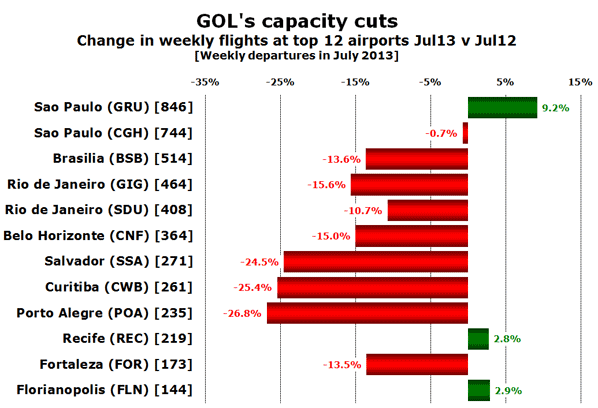 A key development in GOL’s network strategy has been the creation of a ‘scissor’ hub at Santo Domingo Airport in the Dominican Republic. Using 737-800s, there are daily flights from Sao Paulo and Rio de Janeiro to Santo Domingo, which then fly on to Miami and Orlando. Whereas the US sectors are around 1,500 kilometres, the flights from Brazil to Santo Domingo are well over 5,000 kilometres, resulting in payload restrictions on these sectors. However, the airline recently confirmed that the routes are performing well and that at least one further US destination may be added soon.

The other main development in terms of new routes has been the expansion at Sao Paulo Guarulhos. The following routes have been identified by anna.aero as having launched in the last 12 months.

The Sao Paulo (GRU) to Rio de Janeiro (SDU) route was operated with typically three flights per day until 23 February, when frequency was increased to between eight and 10 flights per day. Other routes, such as Brasilia – Natal, Sao Paulo (GRU) – Joao Pessoa, and Rio de Janeiro (GIG) – Campo Grande, resumed in late February 2013 after having previously operated until April or May 2012. GOL returned to the US market in mid-December  with a new strategy. Non-stop flights with the airline's 737-800s are not practical, so GOL has created a scissor hub at Santo Domingo Airport in the Dominican Republic, enabling it to serve Miami and Orlando in Florida, from Rio de Janeiro and Sao Paulo. The first arrival in Miami received the traditional wet welcome.