While Wizz Air (London Luton to Lublin) and easyJet (London Southend to Krakow) have recently celebrated new routes between the UK and Poland, it is actually Ryanair that accounts for most of the 16.5% growth in air traffic between these two countries in the first half of 2013. Ryanair now accounts for 63% of the seats in the UK - Poland market, well ahead of Wizz Air (22%), easyJet (6%), LOT (5%) and British Airways (3%).

Analysis of data from the UK Civil Aviation Authority shows that passenger numbers on international routes from UK airports were up 2.6% in the period January to June 2013, compared with the first half of 2012. Given that the first half of 2012 contained an extra day (29 February), the real growth is closer to 3.1%.

Analysis of the UK’s top 15 international country markets reveals that 13 of them have registered growth compared with 2012, though only three have managed growth of more than 5%. The UK – Poland market is up 16.5%, while passenger numbers to the United Arab Emirates are up 15.2%. Only Ireland and Canada have reported declines, and both of these were less than 5%. 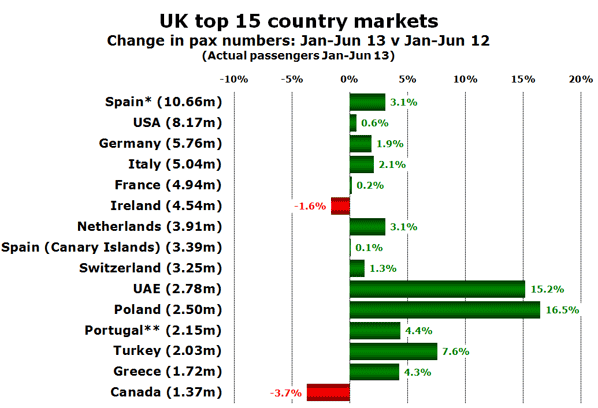 If volume growth rather than percentage growth is analysed, then the UAE, Poland and Spain lead the way, each of these country markets gaining over 300,000 additional passengers in the first half of this year. Smaller country markets that reported impressive volume growth are Norway, with an extra 142,000 passengers (+12.1%), and Hungary, with an additional 103,000 passengers, representing growth of 18.5%. 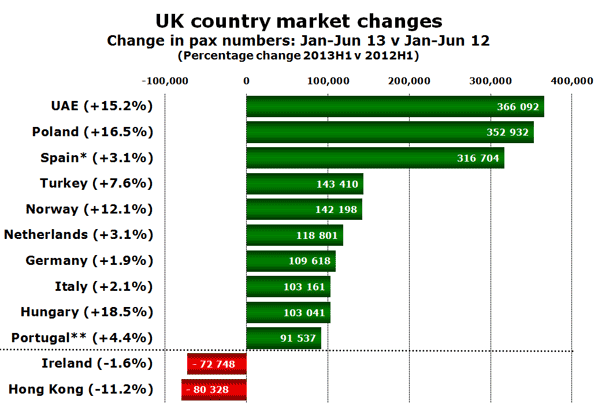 The UK – Poland market received a boost last year when Warsaw Modlin Airport opened and Ryanair decided to serve the airport from many of its European bases, including several in the UK (Bristol, East Midlands, Glasgow Prestwick, London Stansted, and Manchester). However, infrastructure issues at the airport meant that Ryanair relocated its Warsaw flights to Warsaw Chopin Airport before Christmas, where they have remained throughout the first half of 2013.

Another new airport in Poland opened in late 2012 at Lublin, in the east of Poland. There are UK services to this airport operated by Ryanair (Liverpool and London Stansted), and Wizz Air (London Luton). Other new UK – Poland services include Manchester – Gdansk (launched 9 November 2012), Edinburgh – Katowice (31 March 2013), Glasgow Prestwick – Rzeszow (31 March 13), East Midlands – Poznan (30 April 2013) and Bristol – Szczecin (30 April 2013), all of which have been introduced by Ryanair.

A route that will have had only a marginal impact on the statistics was easyJet’s new route from London Southend to Krakow, which launched on 17 June.

Passenger numbers on flights between the UK and the United Arab Emirates (UAE) have grown by 15.2%, with growth spread across five different UK airports. As a result, Dubai, with 2.32 million passengers, is now firmly established as the third busiest international destination across all UK airports, beaten only by Amsterdam (3.66m), and Dublin (3.35m), and well ahead of Malaga (1.94m) and Geneva (1.89m). Based on current growth rates, Dubai could even become the leading international destination from the UK as early as 2018.

One of the factors influencing the growth in the Heathrow – Dubai market is the launch, at the beginning of the summer season, of Qantas’ double-daily flights, as part of its new partnership with Emirates.