Puerto Rico regains Bogotá with Avianca after 12 year-gap; traffic up so far in 2013 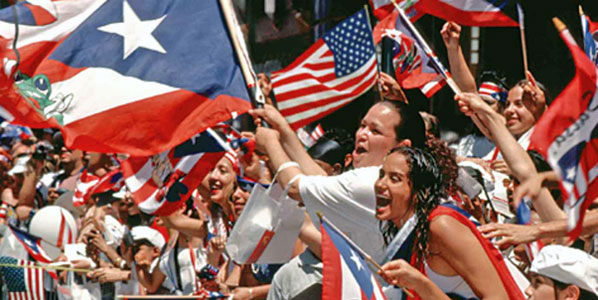 Inhabitants of Puerto Rico will be having a day off this week to celebrate Constitution Day. The holiday commemorates the day when the Constitution of Puerto Rico was promulgated by Governor Luis Muñoz Marín on 25 July 1952. He did such a good job, that they also decided to name the country’s main airport in San Juan after him.

Located in the northeast of the Caribbean, and an unincorporated territory of the US, like Guam in the Pacific and the US Virgin Islands (also in the Caribbean), Puerto Rico is the home for the region’s busiest airport – San Juan Luis Muños Marín International. The airport serves the country’s capital and largest city, with the archipelago boasting a total population approaching four million.

The three largest airports are also Puerto Rico’s only international airports, and all are located on the main island. Along with the biggest, San Juan, are Aguadilla, the #2 airport on the north-western tip and Ponce on the southern coast. These airports control over 96% of all passenger traffic in Puerto Rico. Aguadilla has direct flights to New York Newark (United Airlines – 5 weekly), Fort Lauderdale (Spirit Airlines – 4), New York JFK (JetBlue Airways – 14) and Orlando (JetBlue – 7), while Ponce offers New York JFK (JetBlue – 7) and Orlando (JetBlue – 7). Many of the other commercial airports, like Vieques, Culebra and Mayaguez, serve other islands around the archipelago with links to the capital, as well as limited service to surrounding islands. 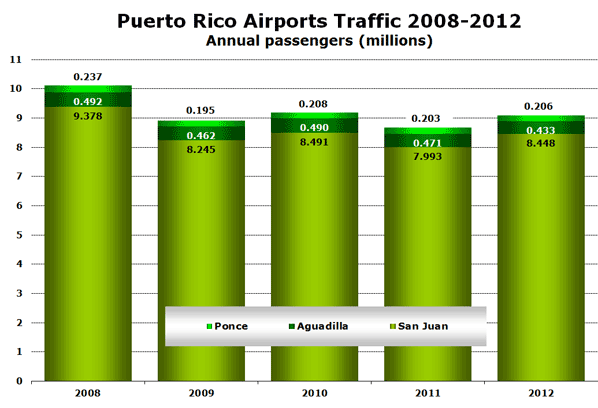 Over the last few years the country’s main airports have failed to recover the recent 2008 traffic high-spot, when the trio combined to breach the 10 million annual passenger barrier. Looking at 2013 data, it seems unlikely that this year will deliver this landmark traffic volume, as the airports have only grown by 1.2% in the first three months of 2013, driven largely by 1.8% growth at San Juan, as the other two smaller airports have registered traffic declines (Aguadilla -6.3%; Ponce -6.8%).

When comparing the selected week in August 2013 with the same dates last year, it is Seaborne Airlines’ schedule growth at 408%, which clearly stands out. The regional carrier began a codeshare agreement with American Airlines in June, following the cessation of the US major’s partnership with Executive Airlines. On the back of Executive’s market exit, Seaborne has begun new flights to Tortola, British Virgin Islands (29-weekly), Dominica, Dominica (8), Point-a-Pitre, Guadeloupe (4) and Fort-de-France, Martinique (4) to boost its presence at San Juan. In addition, it has grown frequency on its existing routes to St. Thomas and St Croix on the US Virgin Islands. 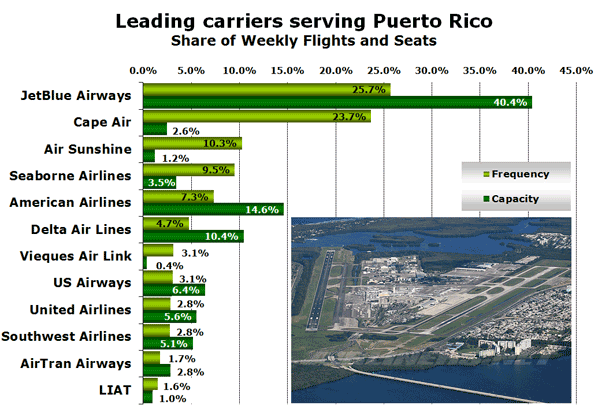 AirTran Airways’ contraction in Puerto Rico (-70% in the last 12 months) comes as its parent carrier Southwest Airlines assumes control of many of its subsidiary’s routes. The 79 weekly frequencies operated by AirTran last year were split across the five destinations of Atlanta (19 weekly), Baltimore/Washington (12), Fort Lauderdale (14), Orlando (25) and Tampa (9) have been reduced to 23 this year, as the LCC now serves Atlanta (9) and Fort Lauderdale (14) only. Last August, Southwest operated no flights to Puerto Rico, it now offers Baltimore/Washington (14 weekly), Orlando (16) and Tampa (7).

Unsurprisingly, 76% of all flights from Puerto Rico are destined for the US. Putting this capacity aside, it is flights to the British Virgin Islands, around 150 kilometres away, which dominate the archipelago’s flight schedules, with 133 weekly flights to Tortola (99) and Virgin Gorda (34). 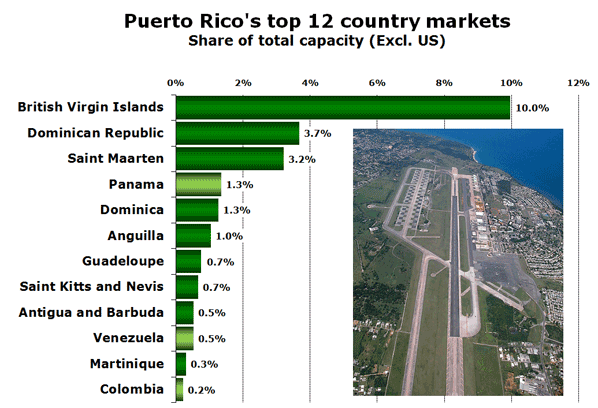 Of the top 12 countries represented here, only three are from outside of the Caribbean, with Copa Airlines’ 18-weekly service to Panama City leading the way. American Airlines connects San Juan to Caracas in Venezuela with a daily operation, whereas Avianca has launched this week a thrice-weekly A319 from Bogotá to San Juan, resumed after a 12-year break on the route.

Condor’s weekly flight to Frankfurt in Germany now represents the only flight to Europe, following British Airways’ withdrawal from the market in April this year with the cancellation of its weekly London Gatwick service.