Following a 2010 agreement, Shanghai Airlines is now a wholly-owned subsidiary of China Eastern Airlines and, since mid-2011, also a SkyTeam member.

Established in 1985 by the Shanghai municipal government and local enterprises, Shanghai Airlines initially focused on domestic flying, before expanding into international markets in 2007. A decade later, the airline was officially welcomed as Star Alliance’s 19th member, consolidating the group’s presence in the Shanghai market. In early 2010, Shanghai Airlines merged with another Shanghai-based airline, becoming China Eastern Airlines’ fully-owned subsidiary. While the airline has since retained its own branding, it moved to its parent’s alliance, SkyTeam, in 2011.

Capacity growth comes to a halt

Examination of annual seat capacity data shows that Shanghai Airlines increased its offering by 45.7% in the last nine years, from 12.5 million seats in 2005 to 18.2 million in 2013 (data as of 24 July). The airline offers predominantly domestic services, whereas only around 10% of all 2013 seats are allocated to international markets. 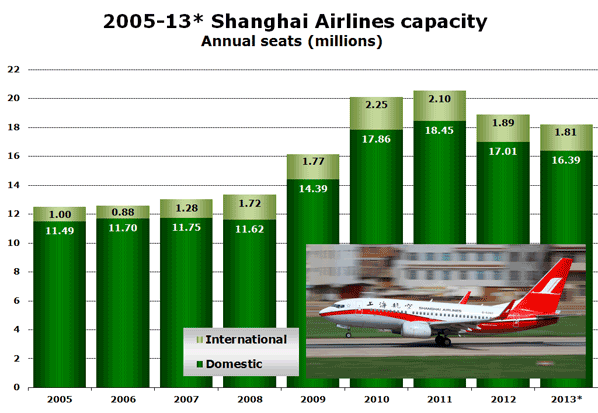 While Shanghai Airlines increased its seat offering in every year since 2005 until 2011, most of this growth occurred over two years. In 2009 and 2010, the airline added 21.1% and 24.4% extra capacity, mostly on domestic routes, although 2010 was also the year of peak international capacity for the airline with 2.25 million seats offered (2013 international capacity as reported to date is lower by a fifth).

In 2011, the carrier recorded only 2.2% more seats than in the previous year and the positive result was driven by the growth in the domestic segment (+3% year-on-year compared to -6.7% for international). Last year, capacity reductions were applied across the business, resulting in an overall decrease of 8%. The downward capacity trend has continued in 2013, as reported in late July, albeit at -3.7%, representing a slight improvement over 2012.

Unsurprisingly, Shanghai Airlines’ activity is centered on the two airports serving the south-eastern Chinese city, where it operates a dual hub operation. In August 2013, Shanghai Airport commands around a third of all seats offered by the airline, a decrease from a 58% share in the previous year’s operation. At the same time, 11% more weekly seats are allocated to Shanghai Pudong this August than a year before, giving it a total share of 18%. Shanghai Airlines’ operation at Shanghai Airport was significantly reduced in terms of seat capacity compared to August 2012 (-23.3%), but the number of weekly flights fell by only 1.1%, indicating a shift towards smaller aircraft. 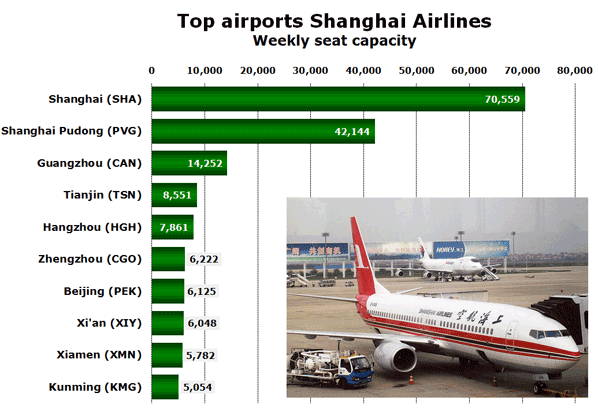 A different pattern can be observed at Shanghai Pudong, where Shanghai Airlines has added both seats and frequencies (21.4% and 30.7% respectively) in August 2013 as compared to the same period of 2012.

All but one top destinations from Shanghai are domestic 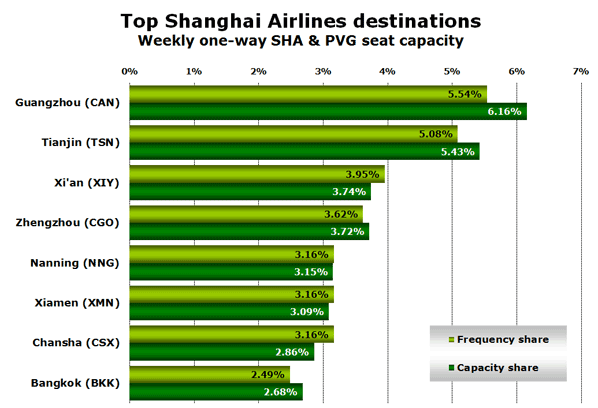 Bangkok, served by Shanghai Airlines with 22 weekly frequencies from Shanghai Pudong Airport, is the airline’s largest international destination. The Thai capital is #8 on the top destinations list, but takes up less than 3% of the carrier’s capacity from the two airports. The Thai resort of Phuket is the second-ranking non-Chinese destination. However, the twice-daily schedule offered by Shanghai Airlines to Phuket places it in mid-20s in terms of the airline’s largest routes.