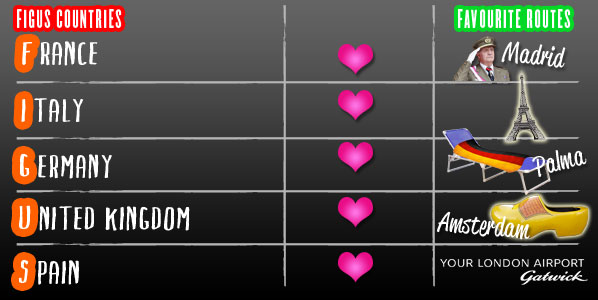 Amsterdam, London Gatwick, Madrid, Palma de Mallorca and Paris CDG are each the best served airport from one of the five FIGUS countries in the first half of 2013.

Last week’s analysis of UK traffic trends in the first half of 2013, which revealed that Dubai was now the third biggest international route from the UK (after Amsterdam and Dublin), got anna.aero wondering which destinations were the most popular from other major European markets. The FIGUS (France, Italy, Germany, UK and Spain) countries were selected for this analysis, and although passenger numbers are obtainable for Germany and Spain, it was decided to use capacity data so that the same method was used across all five country markets. Our analysis looks at scheduled seat capacity from all airports in a country to international airports, using schedule data from Innovata / Diio Mi. For all five country markets the same axis scaling is used, so that comparisons can be made between the different country markets.

Although Amsterdam easily beats Dublin in passenger terms, in capacity terms it is a lot closer with Amsterdam coming out on top by just 1,665 seats. Five Spanish airports make the top 12, with Malaga just beating Alicante, followed by Barcelona, Palma de Mallorca and Madrid. New York JFK made it two long-haul destinations in the top 8. 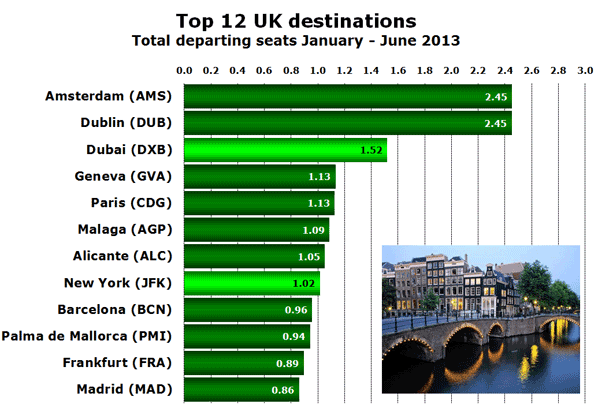 Palma de Mallorca just edges out London Heathrow as the leading international airport among German airports in the first half of this year. Germany’s top 12 markets cover the greatest geographic spread, representing 10 different countries. Only Spain (Palma de Mallorca and Barcelona), and Turkey (Istanbul and Antalya), have two airports in the top 12. Dubai is the leading long-haul destination. 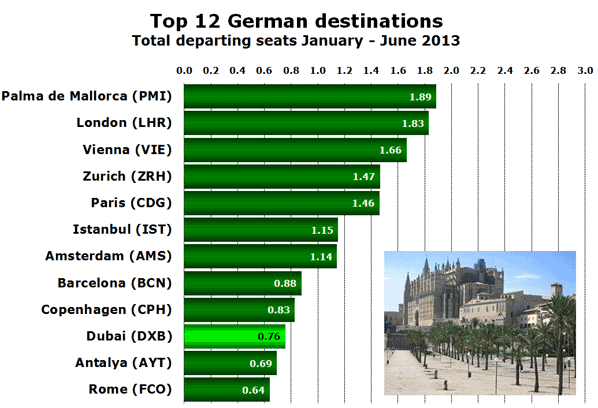 London Gatwick is the runaway winner among Spain’s leading international destinations, more than 50% bigger than its nearest rival, another UK airport, Manchester. UK airports take four of the top 10 places with two Paris airports in the top 6. There are also three German airports (Frankfurt, Düsseldorf and Munich) in the top 12, highlighting how popular the Spanish leisure market is for customers in northern European markets, with typically less consistently warm and pleasant summer weather. 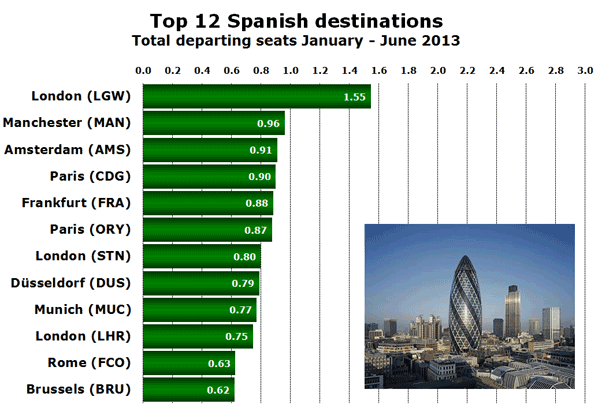 Paris CDG is the easy winner among Italy’s leading international destinations, beating Lufthansa’s two hubs (in Frankfurt and Munich), into second and third places. Three London airports also make the Italian top 12, while Paris CDG is joined by Paris Orly. Brussels Charleroi makes the top 12 thanks to Ryanair’s extensive Italian network from the airport, while Istanbul is the most easterly destination that makes the top 12. Dubai ranked 15th, just one place ahead of Tirana in Albania. 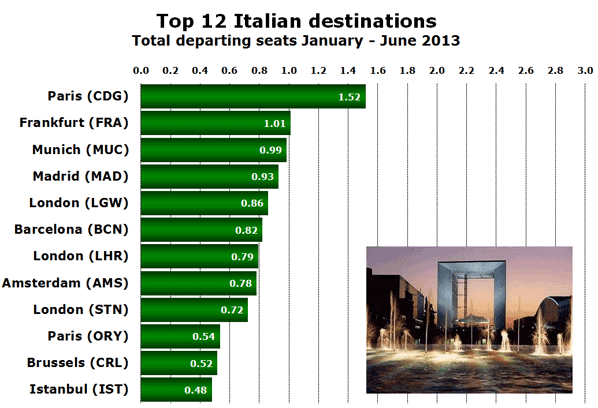 Madrid wins the race to be the leading international destination from France, with not much to separate Barcelona, Rome Fiumicino and London Heathrow in the battle for second place. Frankfurt and Munich also make the French top 12, while Lisbon makes its only appearance in our analysis. France’s historic links with various parts of North Africa, result in Algiers (6th), Casablanca (10th) and Tunis (12th), all ranking in the top 12. New York JFK, in 18th place, is the leading long-haul destination, two places ahead of Dubai. 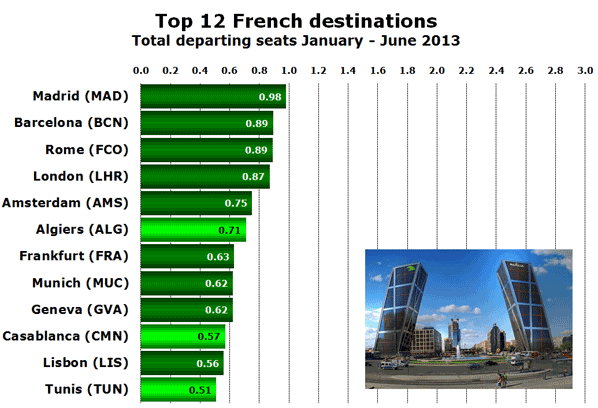