JetBlue has launched two major new routes from its base at Boston Logan Airport in recent weeks. On 23 May, it began operating five daily flights to Philadelphia (an anna.aero Route Of The Week),  while on 25 July, double-daily flights to Houston Hobby  were celebrated with the traditional water salute. Both routes are operated with the airline's 100-seat E190s. Since last summer JetBlue has grown the Boston base by 17%, the fastest-growing of its top 12 airports.

JetBlue Airways has, according to analysis of Innovata / Diio Mi schedule data, dropped just four routes during the last 12 months. At the same time, it has launched 16 new routes, and seen its weekly seat capacity grow by just over 6%. One of these new routes, between Boston Logan Airport and Houston Hobby Airport, began last week, with double daily flights, using the airline’s 100-seat Embraer E190s. This is the airline’s second route from Houston, having launched New York JFK services as long ago as September 2006.

Boston has always been JetBlue’s second biggest base (after JFK), but in the last 12 months the gap has narrowed, as JetBlue’s JFK capacity has remained virtually unchanged, while Boston’s has increased by over 17%. In fact, out of JetBlue’s top 12 busiest airports, it is the fastest-growing in the last 12 months, beating the double-digit growth also achieved at San Juan (in Puerto Rico), Fort Lauderdale (in Florida), and Santo Domingo (in the Dominican Republic). 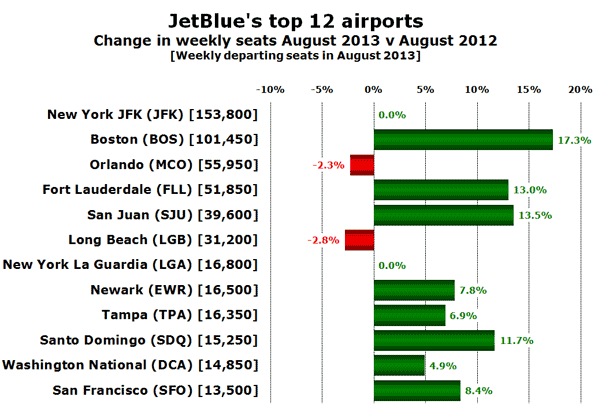 16 new routes including five from JFK and three from Boston

In the last 12 months JetBlue has started 16 new routes that are still operating; five from New York JFK, three from Boston, and three from Fort Lauderdale. New cities added to the airline’s network in the US include Albuquerque (New Mexico), Anchorage (Alaska), Charleston (South Carolina), Philadelphia (Pennsylvania), and Providence (Rhode Island). Other non-US destinations joining the airline’s growing network were Cartagena and Medellin in Colombia, Samana in the Dominican Republic, and Grand Cayman.

Between now and the end of the year, JetBlue currently plans to launch an additional eight new routes, including two each from Hartford, CT (BDL) and Worcester, MA (ORH), both of which are new airports for the airline. Other new destinations are Lima in Peru (from Fort Lauderdale, starting 21 November), and Port-au-Prince in Haiti (from Fort Lauderdale and New York JFK, starting 5 December).

Eight airports each see loss of one JetBlue route

The four routes that JetBlue has dropped in the last 12 months are spread across eight different airports. Coincidentally, two of the routes dropped launched on the same day back in June 2006, but they ceased operations some seven weeks apart in early 2013. All eight airports are still served by JetBlue from at least one other airport.