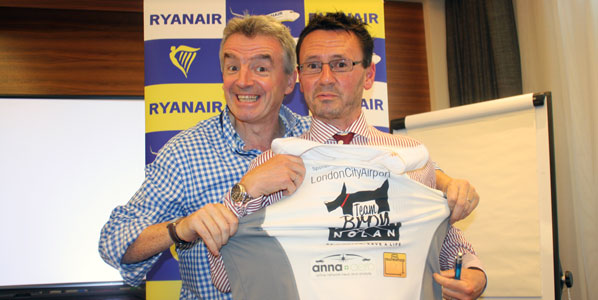 It’s been a busy week in London with Ryanair calling two separate press conferences, the first so that the mega-rich “Ultra-Low Cost Carrier” could present its Q1 results, and the second, just 48 hours later, to announce planned winter frequency increases between Dublin and five UK airports, as a response to similar moves by the Irish national carrier which, it said, “undermines the discredited UK Competition Commission’s investigation into Ryanair’s minority 29% stake in Aer Lingus.”

But, other than these widely-reported numbers and assertions, which you can see for yourself on the Ryanair website, or read about in your favourite business newspapers, what else has anna.aero found out about the direction of this revolutionary low cost airline? (Previously Ryanair preferred to be called “low fares” but it has given up on that, and the official tag is now “Europe’s only ultra-low cost carrier.”)

One of the key points of the Q1 results is that “unit costs rose 4% in line with the increase in sector length” (also 4%). Separately both the CEO, Michael O’Leary (MOL) and the CFO and Deputy CEO, Howard Millar, both told us that this was “the effect of this year” – especially the expansion of services in the eastern Mediterranean. “Reaching agreement with London Stansted is key to the future sector length trends – if we agree a deal with STN, we’ll reverse the huge declines seen in recent years, and the new routes we’ll launch will see the sector length go down.”

So, bearing in mind that the ex-director of Ryanair route development, Ken O’Toole is the now the Chief Commercial Officer of Manchester Airports Group, the new owner of Stansted, anna.aero asked MOL if this was making negotiations any warmer? “Warm – well it depends what you mean by that temperature – at least we’re having discussions with Stansted, which is more than I can say about Dublin…” And indeed Dublin is what MOL then talked about in some detail. 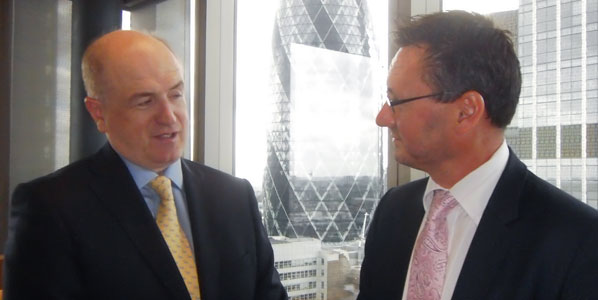 In the City – Ryanair CFO and Deputy CEO, Howard Millar, tells anna.aero what they hope to get from a London Stansted deal: “We’ll look to add 5 million passengers over five years taking us from 12.2 million to 17.2 million by 2018.”

Ryanair’s planned winter increases between the UK and Dublin (Bristol from two- to three-daily; Birmingham and Edinburgh from three- to four-daily; Manchester from four- to five-daily, and; London Stansted from seven- to eight-daily) do not amount to much change in the marketplace, and will more than likely utilise spare aircraft downtime from the dozens of 737-800s which the airline plans to park-up this winter. In terms of its impact in the Dublin-UK market as a whole, the extra flights amount to a 5% increase in weekly seats and an additional 4% of flights (using Innovata / Diio Mi data for 10-16 November 2013). The significance is clearly more marked when considering just the five airports involved, with a 13% hike in weekly capacity and a 10% growth in weekly frequencies across these airports.

In fact, many of the planned frequency increases are simply adding back rotations which the ULCC has previously culled. For example, its Dublin to London Stansted schedule was at 10 daily flights in W05 (and 11-daily in S05), Dublin-Birmingham at five flights per day in W06, while both Dublin to Bristol and Edinburgh have been previously operated (in W07) at four times a day.

The extra capacity may help to reduce the (mainly) negative trends being experienced in terms of annual passenger traffic on the five city pairs – with Dublin to London Stansted (-8%), Bristol (-6%) Edinburgh and Birmingham (both -2%) all showing declines between 2012 and 2011, with only Manchester (+5%) showing growth in that period (Source: UK CAA).

According to anna.aero’s analysis of schedule data from Innovata / Diio Mi, Ryanair is operating 0.5% fewer flights this summer (second week of August) compared with last summer, though thanks to an increase in average sector length (from 1,217 to 1,280 kilometres), ASKs (Available Seat Kilometres) are up almost 5%. However, while overall the number of flights remains basically unchanged, there are significant differences when analysed at the country level, as Ryanair continues to shift capacity between different bases. 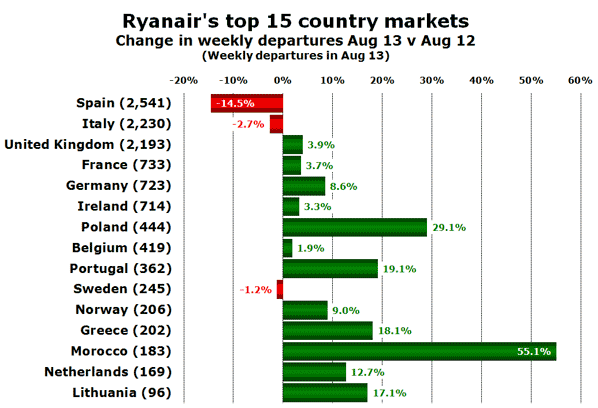 Ryanair’s biggest country market, Spain, sees a massive 14.5% cut in flights this summer, a reflection of the economic situation in the country, but also a reaction to increases in airport charges. Italy, the airline’s second busiest market, has also seen a reduction in flights, but of a more modest nature (down 2.7%). To compensate for these cutbacks Ryanair is actually growing in 19 of the 29 countries in which it operates, with the biggest increase in weekly flights in Poland (100 more per week), the United Kingdom (83), Morocco (65), Portugal (58) and Germany (57). After Spain (430 fewer flights) and Italy (61), the biggest reduction in weekly flying is in Hungary (Budapest), where this summer there are now 58 fewer weekly departures.

Analysis at an airport level, reveals that eight airports served last summer no longer feature in Ryanair’s portfolio of routes. Two airports each in Italy (Rimini and Verona), and Spain (Asturias and Bilbao), are joined by Graz in Austria, Larnaca in Cyprus, Turku in Finland, and Warsaw Modlin (where flights have temporarily moved to Warsaw Chopin), as being no longer served by the airline. However, during the same period 21 new airports have been added to the airline’s network, as summarised below. 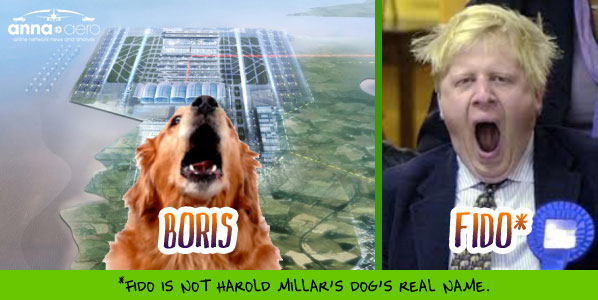 Barking mad: The Ryanair position on new runways for London is that Heathrow, Gatwick and Stansted should each get one. “You should never give one extra runway to just one airport – it would screw the others” O’Leary told anna.aero. Ryanair CFO, Howard Millar, was more demure about London Mayor Boris Johnson's backing for a new hub in the Thames Estuary: “Even my golden retriever knows it’s a barmy idea.”