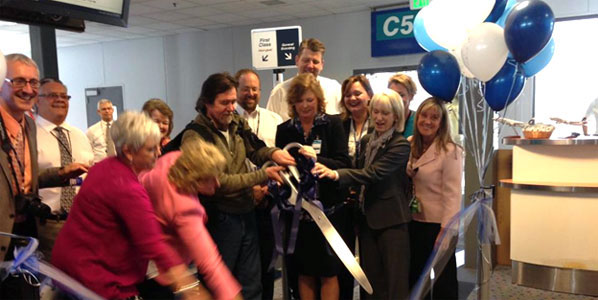 Earlier this year, Alaska Airlines launched its only route to Salt Lake City from Seattle and now offers twice-daily services on the route. Cutting the ribbon in the capital city of Utah was Phil, an MVP Gold and almost Million Miler with Alaska Airlines.

Similarly sized to other US markets such as Cincinnati, Memphis or Nashville, Salt Lake City International Airport has been much more successful in attaining its position as a hub over the years. It being the only substantial alternative to Denver in the US Rockies region has enabled Delta Air Lines to turn it into its fourth-largest and western-most centre of operations. But the airport is also served by four other US network carriers, as well as three low-cost carriers. No non-US carriers fly to Salt Lake City and flights to all five international destinations are operated by the airport’s largest carrier, Delta.

Examination of traffic data provided by the airport shows that in the last five years, Salt Lake City was losing traffic in all years except for 2010, when 2.3% more passengers were handled at the airport than in the preceding year. Even so, the 2010 result of 20.9 million passengers was significantly lower than in the peak year of 2007, when 22.3 million travelers passed through the airport. 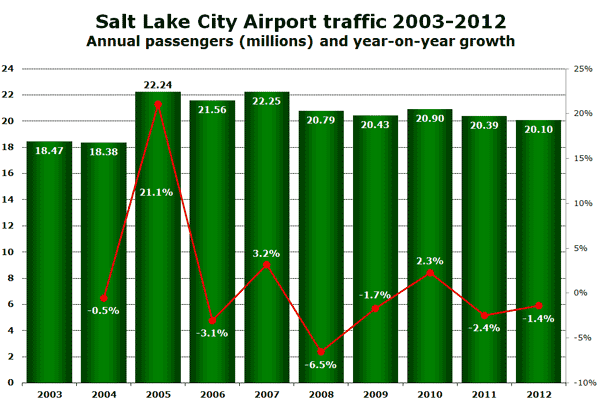 Traffic data published by the airport (January – May 2013) indicates that while Salt Lake is still behind last year’s traffic volumes, the trend is slowly reversing and, compared to the same period of 2012, the airport served only -0.75% less passengers. In fact, the airport has seen the volume of traffic increase since March at an average rate of 1.3%.

Even though it is Delta’s answer to United Airlines’ hub in Denver, Salt Lake City still handles only around 37% of Denver’s traffic. However, as analysed using the anna.aero Seasonality Variation in Demand Calculator (SVID), Salt Lake City surpasses its larger counterpart in terms of traffic spread throughout the year. While Denver scored 0.98 on the SVID scale, the same indicator shows a slightly better 0.71 mark. 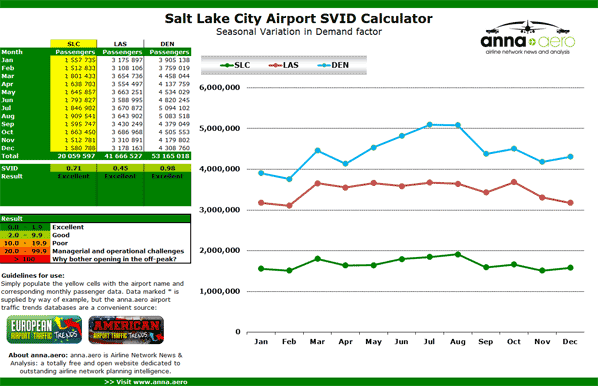 On the other hand, Las Vegas, located to the south-west of Salt Lake City, shows an even flatter a demand profile, scoring 0.45 on the SVID scale. However, it must be noted that Las Vegas generates significant amounts of point-to-point traffic, much more than Salt Lake City possibly ever could.

Weekly average capacity data for August 2013, as reported by Innovata, shows that overall weekly seat capacity at Salt Lake City is up by 7.4%, with corresponding growth in frequencies of 4.8%. Delta remains the largest carrier with 77.4% of all weekly flights at the airport this August, 1.2% more than in the same month of 2012. The carrier increased it weekly offering by 6.4% year-on-year with a slightly larger increase of seats (+7.8%).

Southwest Airlines, the airport’s #2, provides 223 weekly flights in August 2013 to a total of 10 destinations, which gives it a market share of 9.1%. It also means that Southwest’s operation at the Utah airport is nine times smaller than Delta’s.

US Airways is the only incumbent carrier to significantly increase its offering in Salt Lake City this August with 23.5% more seats offered than in the corresponding month of 2012. The airline launched its third route into the Utah airport on 4 June (daily flights from Philadelphia) and increased frequencies from Charlotte from five weekly to daily. It also continues to operate 42 weekly flights to Phoenix.

A total of 165 weekly services are operated to the largest destination from Salt Lake City, Denver, by four operators (Delta, Frontier Airlines, United and Southwest), each offering at least a five-daily schedule. 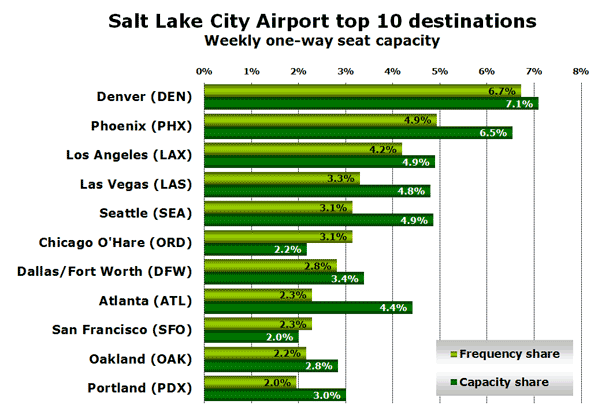 Phoenix, Salt Lake City’s #2 destination, has a marginally lower share of weekly seats at the airport than Denver (6.5% vs. 7.1%), but significantly less frequencies (4.9% vs. 6.7%). No other destination accounts for more than 5% of either weekly frequencies or seats in Salt Lake City this August.

Salt Lake City’s international connectivity is limited, to say the least, with only five routes on offer from Delta. Two Canadian destinations – Calgary and Vancouver – come top of the non-US list with twice-daily flights available on each. Daily A330-200 flights on the 8,200-kilometre route to Paris CDG account for the airport’s only intercontinental service, while two further seasonal destinations in Mexico (Cancun and Guadalajara) are offered on weekly basis.