Seat capacity in Malaysia +14.3% in 2013; AirAsia and Malaysia Airlines compete for #1 position 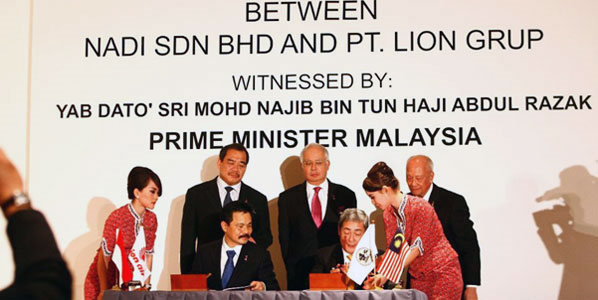 Malaysia’s domestic growth is now party fuelled by Malindo Air, Lion Air’s Malaysian joint venture, which launched earlier this year. So far, the new airline has managed to gain a 7% share in the market.

With population nearing 30 million and a dynamic economy representing the third largest force in the ASEAN region (and 29th in the world), Malaysia has seen significant growth of commercial air services in the recent years, not least because of the unprecedented growth of the largest Asian LCC, AirAsia. Being an attractive market as it is, Malaysia sees increased competition not only domestically (Lion Air’s Malaysian joint venture, Malindo Air, launched earlier this year), but also in international markets with capacity is up 14% this summer.

Analysis of Innovata data shows that one-way seat capacity for routes originating in Malaysia was up in all years since 2006, when a small decrease of -3.1% was noted. Since then, seat capacity has nearly doubled and is set to surpass the 40 million mark in 2013, according to data reported by the airlines as of 31 July 2013. 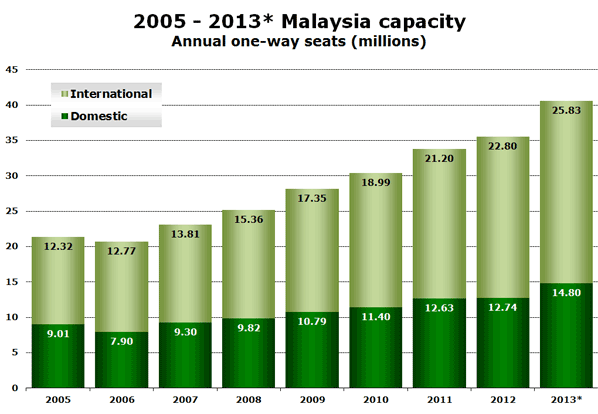 Malaysia Airlines continues to be the largest Malaysian carrier in terms of weekly frequencies, and in August 2013 it will operate more than 2,100 weekly flights, which gives it a 43.5% market share. AirAsia is #1 when measured in seat capacity offered and, with more than 60,000 weekly seats more than Malaysia Airlines, it has a market share of 47.7%.

However, the Malaysia Airlines owned Firefly, which offers full service point-to-point domestic services, commands 6.8% of seats in the market. The resulting combined market share of 44.2%, puts Malaysia Airlines just behind AirAsia in terms of weekly seats.

Two other carriers compete in the domestic carrier – the new entrant, Malindo Air (6.6% market share as measured in weekly seats) and Berjaya Air. Interestingly, the latter more than doubled its offering this summer as compared to August 2012.

Kuala Lumpur has a third of domestic capacity 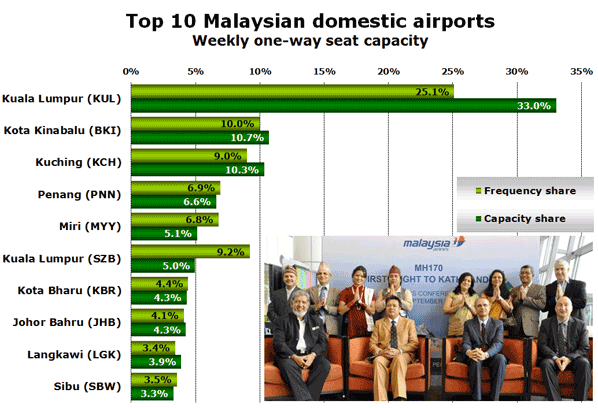 The country’s largest airport is Kuala Lumpur, the hub for Malaysia Airlines and main centre of operations for AirAsia. According to Innovata data for August 2013, 25% of weekly domestic frequencies and 33% of domestic seats are concentrated here. Kota Kinabalu, which last week welcomed new services from Indonesia AirAsia, generates around 10% of Malaysia’s total capacity, as does Kuching.

At more than 75,000 weekly seats offered by eight airlines (7.3% more than in August 2012), Singapore is by far the busiest international destination from Malaysia. A dozen of the country’s airports have non-stop services to Singapore, adding up to 485 weekly flights. 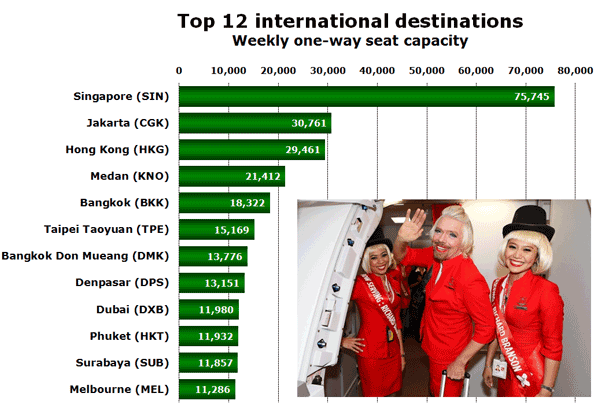 Of the largest international destinations, Medan in Indonesia and Bangkok Don Mueang in Thailand are brand new to the top 12. 140 weekly flights are now offered to Medan by seven carriers, while the downtown Bangkok airport is served exclusively by AirAsia and Thai AirAsia, following the Group’s decision to relocate from the city’s main airport last year.