South Korean carriers dominate the market from Seoul Incheon to Japan; ANA withdraws from the market Korean Air is the largest operator on routes from Japan to Seoul Incheon, offering a variety of connecting options for onward travel, including Honolulu, which launched earlier this year.

With a net loss of two routes in the course of the last year, the market from Seoul Incheon to Japan has shrunk 3.5% in terms of weekly seat capacity (August 2013 vs. August 2012), but continues to grow in the long-term, with 2013 full-year capacity set to improve slightly over 2012 figures. This week’s launch of services to Nagasaki by Jin Air confirms that there is more to traffic between Seoul and Japan than just services to Tokyo.

For the best part of 2000s, seat capacity on routes from Seoul Incheon to airports in Japan hovered around the four-million mark. Following a small decrease in offering in 2007 (-2.8%), the market fared well in the first post-crisis years and it was not until 2010 when airlines reduced their respective capacity again. The 2010 seat loss of -4.6% was then followed by a -5.0% cut in the following year. 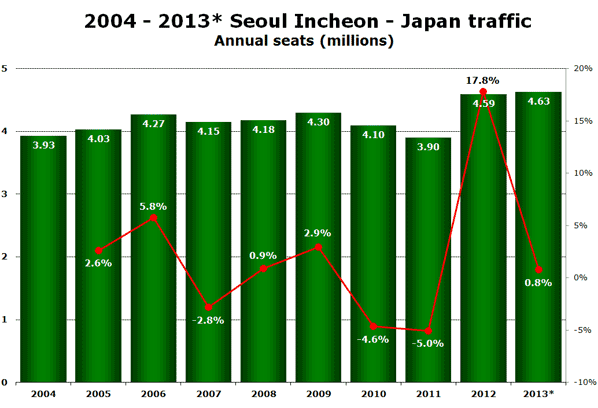 However, 2012 brought about recovery with 17.8% more seats offered between Seoul Incheon and Japan than in the previous year. A total of 4.59 million seats were offered in 2012, more than in the previous peak year of 2009 (4.3 million). Annual capacity for 2013, reported by airlines as of 31 July, indicates further growth in the current year, even though on a smaller scale, with 0.8% more seats offered than in 2012.

Korean Air has a third of the market

Ten airlines operate in the market from Seoul Incheon to Japan this August, two less than in the previous year following the exit of Delta Air Lines (daily to Tokyo Narita) and All Nippon Airways (daily to Nagoya, Osaka Kansai and Tokyo Narita). Korean Air is the largest operator in the market, accounting for 34.5% of weekly frequencies and 36.2% of seats in August 2013 according to data provided by Innovata. 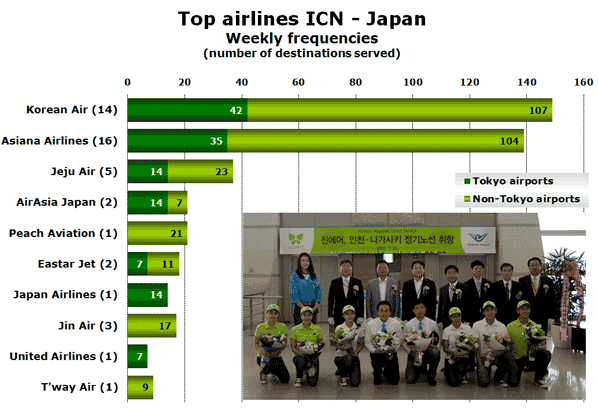 The close #2 in the market, Asiana Airlines, offers 139 weekly flights to Japan from the South Korean airport (10 less than Korean Air), but flies to a larger number of destinations (16 vs. 14). Asiana, which dropped only one route in the course of last year (a weekly service to Yamaguchi), benefited from Korean Air’s withdrawal from Hakodate and Nagasaki, which it had previously served with thrice- and twice-weekly frequencies respectively.

Perhaps unsurprisingly, Tokyo Narita is the largest Japanese destination in August 2013 with a total of seven operators active in the market. The loss of ANA and Delta has been offset by the arrival of Jeju Air and AirAsia Japan with twice-daily services, which brings the combined weekly frequencies up by 11.2% in August 2013. 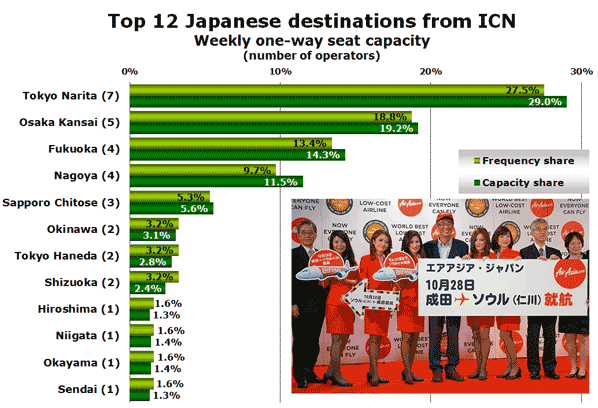 Frequencies are also down on routes to Osaka Kansai, Fukuoka and Nagoya – the only other three Japanese destinations along with Narita to which more than 10,000 weekly seats are offered from Seoul Incheon. Okinawa Airport, located in the southern-most Japanese prefecture of the same name, saw its capacity to Seoul Incheon double this year with the launch of daily flights by Jin Air (commenced 24 December 2012) in addition to the existing, also daily, service by Asiana. The only other route launched by Jin Air since August 2012 is its new service to Nagasaki, which started last week.