SWISS doubles size of Geneva network this winter to 20 routes, but number of flights virtually unchanged 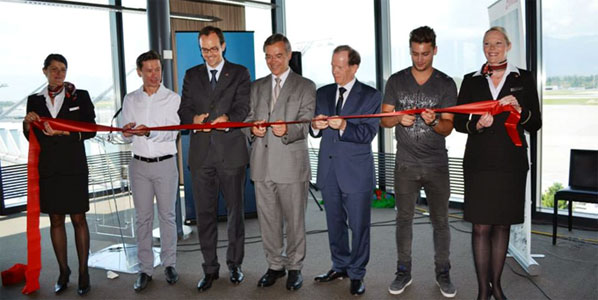 SWISS' major network expansion at Geneva Airport got under way last week with the launch of a new service to St Petersburg. Cutting the celebratory ribbon are Russian ice-hockey legend Slava Bykov (who lives near Geneva); Markus Binkert, SWISS' Chief Commercial Officer; Yuri Gloukhov, Russia’s Consul General to Geneva; Robert Deillon, Managing Director of Geneva Airport; Bastian Baker, a Swiss pop star; and a couple of SWISS flight attendants. SWISS' network in Geneva will double in size this winter to 20 destinations, but without any increase in the total number of flights.

The launch last week of a new twice-weekly service from Geneva to St Petersburg (increasing to thrice-weekly in September) heralds the start of a major network expansion by SWISS from its second biggest base. Before the end of the year a further six new routes will have been added, while three further destinations, which were previously operated only in the summer, will now be served year-round. As a result, SWISS’ Geneva network will grow this winter from 10 to 20 routes. Surprisingly maybe, the number of weekly departures operated by the airline from the airport will remain virtually unchanged, as the new routes are all served at relatively low weekly frequency, while frequencies on existing routes have been cut.

However, closer analysis of SWISS’ Geneva network this winter reveals that it is cutting 31 weekly frequencies from its previously existing winter routes; London City (nine fewer flights), Madrid (eight), London Heathrow (seven), Barcelona (four), Nice (two) and Prague (one). In the case of Nice and Prague, the frequency reduction is compensated for by an increase in seat capacity as a result of the use of larger aircraft. All of these cities, with the exception of Prague, are served by easyJet, the biggest airline at the airport. SWISS’ Geneva operations will be supported by nine based aircraft.

Summer network has grown from 12 to 17 destinations

To some extent the winter schedule is following the pattern of the summer schedule. Comparing schedule data for August 2013 and August 2012, reveals that SWISS has increased its network coverage by five destinations (Ajaccio, Catania, Olbia, Porto, and now St Petersburg), from 12 to 17, but has cut the number of weekly departures from 238 to 218. The new routes were all launched with just two weekly flights (making 10 in total), while London Heathrow and Madrid both lost the equivalent of at least one daily frequency. 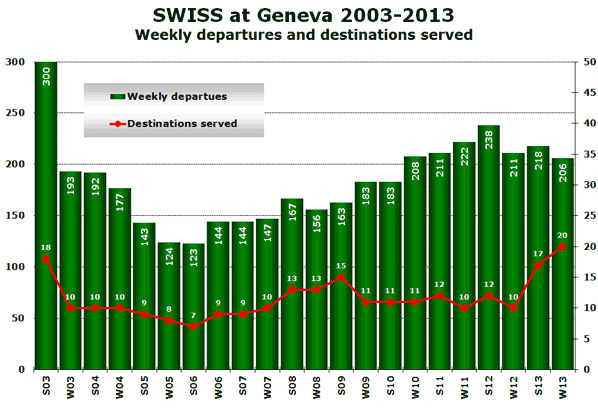 The last time SWISS served more than 17 destinations in a season from Geneva was 10 years ago, in the summer of 2003, when 18 destinations were served. However, by the following winter the number of flights had been cut by one-third, and eight destinations had been axed; two domestic (Basel and Lugano), two in Africa (Casablanca and Tunis), two in southern Europe (Madrid and Nice), as well as London City and Warsaw.

SWISS’ apparent strategy of trying to diversify its route network at a non-hub airport, appears similar to what Air France tried last year, notably in Marseille and Toulouse, to counteract the growing presence of LCCs in these markets. However, given that easyJet has had a base in Geneva since 2004 (and served the airport since 1997), this is hardly a knee-jerk reaction by SWISS.