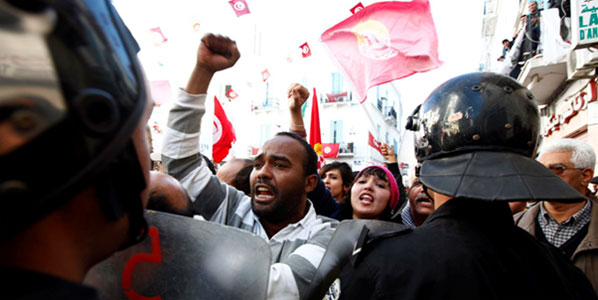 The political situation in Tunisia remains fragile, with a general strike in the last week, following the killing of opposition leader Mohamed Brahmi. The country’s main airport, serving the capital city, Tunis-Carthage International Airport, has felt the effects of the revolution, but capacity growth is on the rise, with over 20% more flights and seats this August versus the same month last year.

Tunis-Carthage International Airport is Tunisia’s largest airport, serving a capital city that has seen more than its fair share of turmoil in the past 18 months. Despite ongoing social, political and economic uncertainty, the airport is definitely on the rebound in terms of its growth trajectory. With an estimated population of just less than 11 million in the country as a whole, the North African city, sitting on the Gulf of Tunis, has around 20% of the population, at approximately 2.25 million. Its position as the #1 airport in the country is seemingly secure following the opening of TAV-operated Enfidha Hammamet Airport in December 2009, effectively cutting Monastir Habib Bourguiba Airport’s (also operated by TAV) traffic in two – the latter being mainly a leisure traffic airport that was bigger than the capital for most of the last decade. 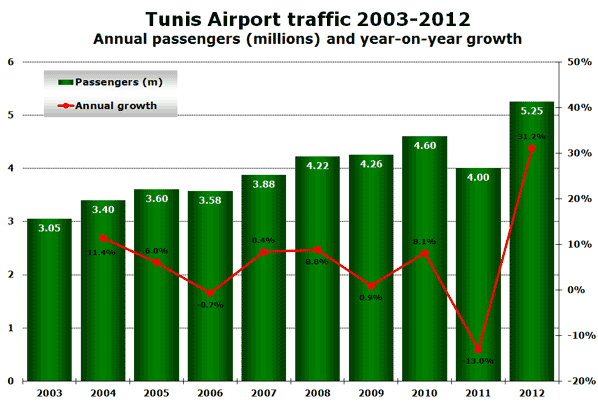 Evaluating the prospects for passenger growth in 2013 by looking at the schedules from Innovata for 10-16 August 2013 versus the same week last year, Tunis Airport’s weekly flights have increased 21% to 550, while weekly seats have climbed by 22% in the same period. As expected, it is the nation’s flag carrier, Tunisair, which was featured by anna.aero in April, which has spearheaded this growth, launching services to Bologna (Italy), Beida, Misurata and Sebha (Libya), Medinah (Saudi Arabia) and Ouagadougou (Burkina Faso) in the last year, contributing to an overall 25% increase in weekly flights and a 28% hike in seats. All of these routes are new to the Tunisair network (pre-2011 revolution), with the exception of Medinah, which was served in August in 2010. It has not been all about growth, as the flag carrier has dropped its twice weekly Athens route in the last 12 months.

Tunisair and its domestic (flying to Djerba, Sfax, Monastir, Tozeur) and regional (Naples and Malta) subsidiary, Tunisair Express, unsurprisingly controls 62% of flights (and 64% of seats) from the capital city airport (and they have therefore been excluded from this analysis). Leading the airlines sharing the remaining 38% is Air France, although it has trimmed its weekly frequencies by 7% (seats by 4%) in the past year. This fall comes despite increasing its Paris CDG operation to four-daily (from thrice-daily), as it has dropped Lyon (daily) and reduced services to Marseille (one flight per week) and Toulouse (two). 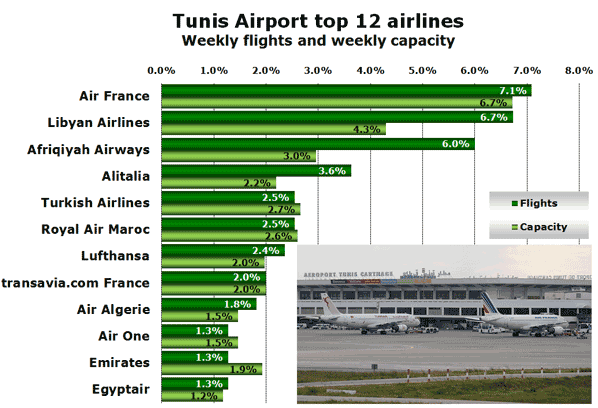 Since 10-16 August 2011, both Turkish Airlines and Afriqiyah Airways have doubled their weekly flights to Tunis. Daily flights by the Turkish Star Alliance carrier to Istanbul, operated with a mix of 737-800s and A320/A321s, have been increased to double-daily, whereas the Libyan airline has started new services to Benghazi (four weekly) and Sebha (thrice-weekly), while it has added another three weekly flights to Tripoli (up from seven- to 10-weekly) to increase its operations at the airport to 20 flights weekly.

It has not all been about growth at Tunis in the 12 months, the airport has lost a combined six weekly services from Aigle Azur (Paris CDG – four weekly) and Nouvelair Tunisie (Toulon – twice-weekly).

Despite the rapid growth in flights to Libya and Turkey, as previously suggested, capacity to Morocco has delivered the most significant move up the top 12 country markets in the last year, rising from seventh in August 2012 to #4 this time around. Both Royal Air Maroc and Tunisair are responsible for this growth, with the former adding four weekly frequencies on its Casablanca operation to Tunis, while the latter has added five weekly flights on its own capital city link, seeing both carriers now operate at almost double daily (13 weekly flights each). Currently there are no flights to any regional destinations in either country, which would seemingly appear as a clear opportunity for route development. 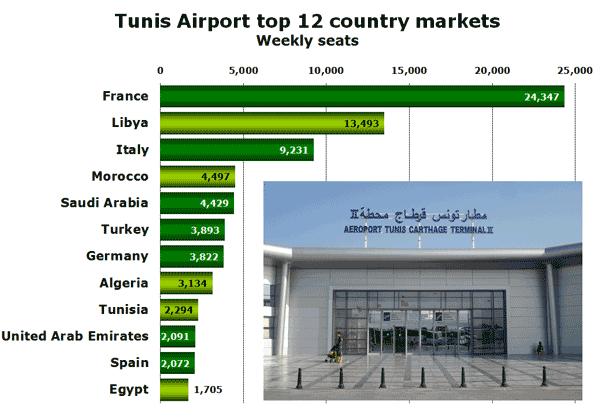 While capacity to Germany has increased by 16% year-on-year, with germanwings adding a third weekly flight to Cologne, and Lufthansa has started a seasonal weekly link to Munich, its modest growth in comparison to other country markets has seen it tumble from fourth to #7. Only one country in the top 12 has seen reduced capacity in the past year, the UAE, although the 2% reduction in weekly seats is marginal.

Talking to Zyed Mohsni, Network and Schedules Manager for Tunisair, anna.aero asked the carrier what its network plans were from Tunis:  “For the next 12 months, Tunisair has several new routes on the starting blocks – mainly to West Africa. We are also preparing new routes to Canada and China too.” Neither of these potential long-haul markets are currently served from the capital city airport.