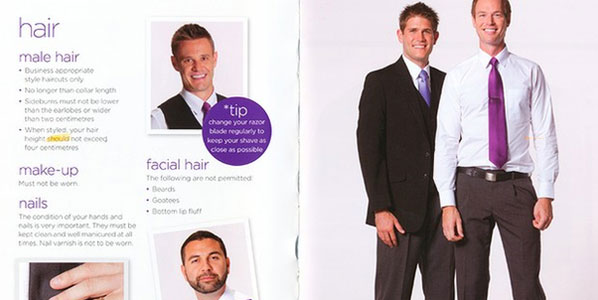 Not one of Virgin Australia’s most important news stories of the past year, but the carrier has recently lost an appeal to stop a flight attendant, sacked for not conforming to the carrier's hairstyle bible (the so-called Look Book), from getting his job back. More newsworthy are the facts that it has acquired Skywest Airlines and a 60% stake in tigerair Australia, while Singapore Airlines has bought 10% of Virgin Australia, which commands 30% of the domestic market.

Firmly established as Australia’s #2 airline, Virgin Australia, which is the largest airline by fleet size to use the Virgin brand, was last reviewed by anna.aero in June 2010, when it was still known as Virgin Blue. Since then the carrier has folded the Pacific Blue and V Australia brands into the new master brand (which took place in May 2011), changed its business model to compete better against arch-rival Qantas, acquired a 60% stake in what is now known as tigerair Australia in October last year (in the same month Singapore Airlines bought a 10% stake in it), and has added nearly one million annual passengers to its traffic and is now close to breaking the 20 million barrier. A busy three years by anyone’s standards. 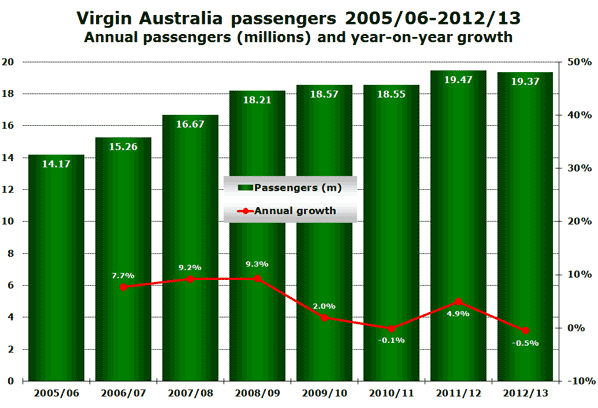 With its former partner Skywest Airlines acquired by the group (now Virgin Australia Regional Airlines) in April this year, the year-on-year data for 10-16 August 2013 versus the same week in 2012 looks impressive – weekly flights are up over 7%, with weekly capacity up 3% to nearly 530,000 seats. This capacity growth is just above the Australian domestic market average, which is expected to only increase by 2.3% over the same timeline.

Of Virgin Australia’s top three operating bases, only Brisbane will have grown when considering August 2013 schedules compared to those operated in 2012. While #1 Sydney will see 2.4% less flights and 4.2% less seats, Melbourne has fared a little better with 1.5% and 3.3% cuts respectively. But declines at the Victoria state capital airport, combined with growth at the carrier’s Brisbane home-hub, will see the Queensland state airport oust Melbourne from the number two spot in terms of weekly seats, allowing Brisbane to hold second place in both capacity and weekly flights.

These cuts are still not as drastic as those being felt at Gold Coast Airport, which is facing the worst cull of the top 12, with over 12% less flights and 14% less seats year-on-year. Both Melbourne and Sydney have lost 10 weekly flights in the last 12 months to coastal city in Queensland, the latter’s reduction was probably a competitive reaction to Qantas’ thrice-daily re-entry on the Sydney-Gold Coast city pair after a four-year absence (it had given the route over to its in-house LCC Jetstar Airways). 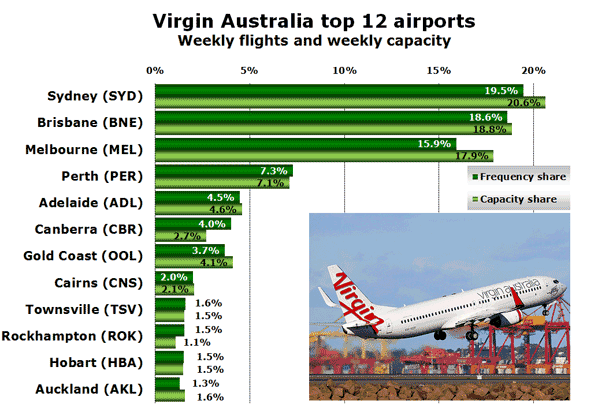 The airline has undertaken a massive expansion in Western Australia, following its acquisition of Perth-based regional carrier Skywest Airlines. The resulting growth, centred on Perth (61% increase in weekly flights; 30% increase in weekly seats), has seen the Western Australia state capital leapfrog Adelaide in South Australia into the fourth largest centre of operations for Virgin Australia. Nine new Western Australia destinations have been added to the Virgin Australia network in the last 12 months, including Albany, Busselton, Derby, Esperance, Geraldton, Kalgoorlie-Boulder, Kununurra, Learmonth and Ravensthorpe, all of which are flown by the former Skywest fleet of Airbus A320s and Fokker 50s and 100s.

Despite flying to 14 countries, predominantly in the Australasia region, Virgin Australia is ostensibly still an Australian domestic airline, with 94.2% of its flights and 92.6% of its seats in August 2013 having an origin or destination there. Indeed, both metrics have increased marginally over the last year, rising 0.4% from 93.8% and 0.1% from 92.5%. Its overall domestic market share is around 30%, behind Qantas which has about 65%, a fact which was recently reviewed by anna.aero 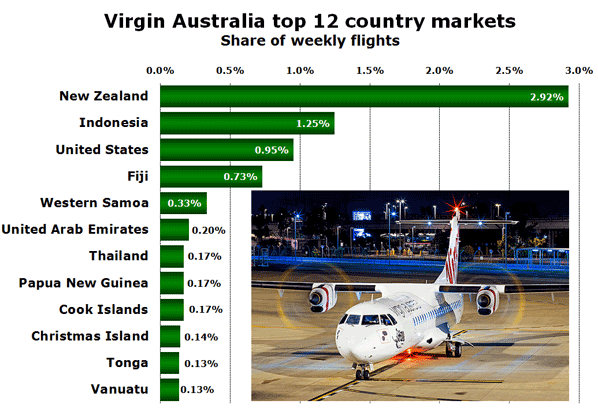 Of the countries sharing the remaining 5% of the carrier’s weekly capacity, three-quarters have not been adjusted in the previous 12 months in terms of the number of weekly flights. With one extra weekly flight (up to five weekly) added from Perth to Phuket, resulting in a 25% increase, Thailand is the fastest growing country market for Virgin Australia. While marginal increases have been registered in the New Zealand and Indonesia country markets, Fiji is the only nation of all those served by the airline to witness a frequency reduction since August 2012.