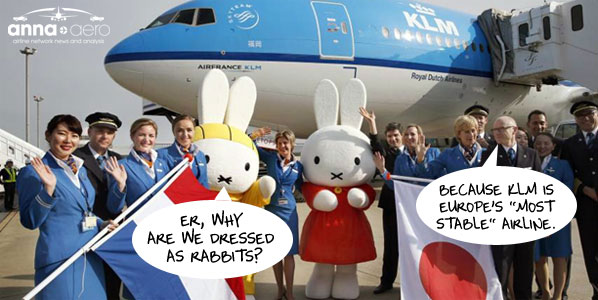 The long and short of KLM Part 1: At the beginning of the summer season KLM launched flights from Amsterdam Schiphol to Fukuoka, Japan which, at 9,131km, is one of KLM's longer routes.

KLM is one of the world’s oldest airlines, having launched flights under that name as far back as 1920. Analysis of the airline’s network over the last year shows it to be one of Europe’s most ‘stable’ airlines. Just four routes were dropped, and five added during the last 12 months. Non-stop services to Bahrain, Khartoum and Tehran were dropped completely (Bahrain is now served via Abu Dhabi), while the Marseille route was ‘handed over’ to its parent company, Air France. In return, KLM took over Air France’s Amsterdam-Lyon service, as well as starting new flights to Alesund in Norway, Fukuoka in Japan, Harare in Zimbabwe, and Manston in the UK. At present, the only additional new route planned for this winter, is Florence, which SkyTeam partner Alitalia is also ‘handing over’.

London Heathrow is busiest route; one of 14 UK airports served

Analysis of KLM’s routes with the highest weekly seat capacity, reveals London Heathrow as the clear winner. The 370-kilometre sector is operated with over 70 weekly flights this August, generating almost 10,000 weekly seats each way, more than 3,000 more than the next destination. In fact, only 1,100 weekly seats separate the next 11 airports in KLM’s rankings. 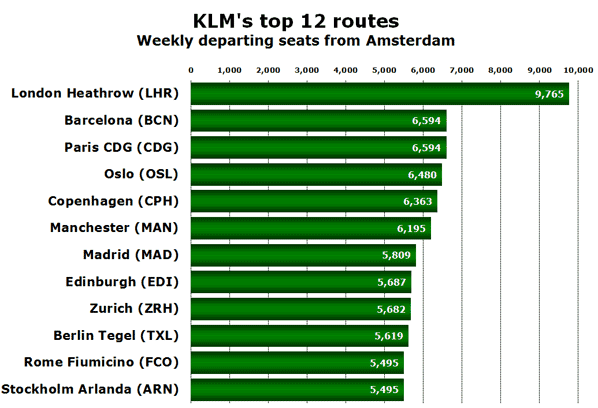 The addition of Manston, in the south-east corner of the UK, brings to 14 the number of UK airports served by KLM from Amsterdam Schiphol which has been promoted in adverts as “London’s fourth airport” for decades. Indeed some of these airports no longer have (or never have had) direct links to London Heathrow operated by British Airways. However, significantly, Amsterdam-Liverpool services were dropped last March.

Oslo is fourth in the busiest-route rankings, and the addition of Alesund to the KLM network, at the start of the summer season, brings to seven the number of Norwegian airports with direct links to KLM’s global network at Amsterdam. 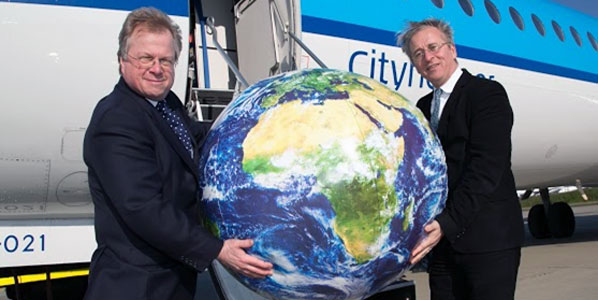 If British Airways has been criticised in the past for focusing its international network purely on London, at least it still has domestic feeder flights from seven UK regional airports. KLM does not even do that. All of its services are from Amsterdam Schiphol, without even domestic feed, with the last domestic link (from Maastricht) disappearing at the end of the summer 2008 season. Admittedly, the Netherlands is a much smaller country, and Amsterdam can be reached by car, pretty much from anywhere in no more than three hours. Instead, Dutch regional airports are served by KLM’s low-cost subsidiary, transavia.com (although not as a feeder airline) a move which Lufthansa is, in some respects, copying with its replacement of many Lufthansa services from regional German airports, with germanwings flights.