After the temporary grounding of Tiger Airways Australia (recently rebranded as tigerair Australia) back in July 2011, and its slow re-building, the Australian domestic market showed robust growth in 2012 of 4.2%, but in the first five months of 2013 this has fallen to just 2.2%. For the year ending May 2013, the country’s busiest domestic route (between Melbourne and Sydney) grew by 6.5% to almost 8.2 million. Three of the country’s top 10 domestic routes have reported double-digit growth over the last 12 months; Sydney – Gold Coast (up 12.8% to 2.53 million), Melbourne – Perth (up 16.8% to 2.22 million), and Melbourne – Hobart (up 17.9% to 1.33 million). 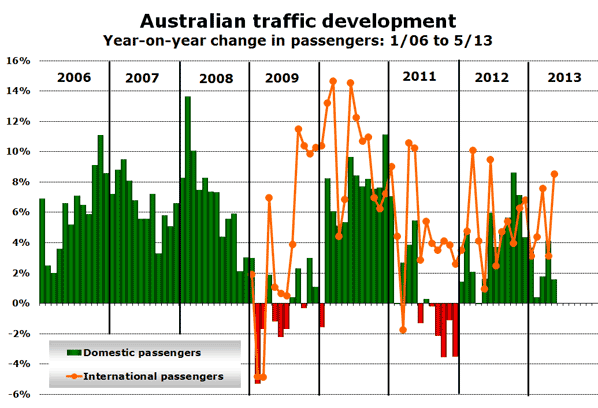 A number of new domestic routes were launched in the first half of 2013 including Tiger Airways Australia’s new Sydney services to Alice Springs, Cairns and Coffs Harbour, plus Brindabella Airlines Sydney to Moree and Orange.