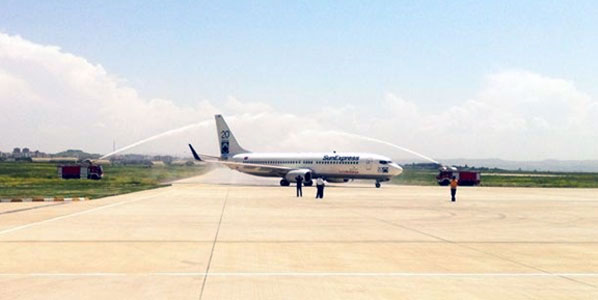 Greeted with a fire truck water-arch upon arrival in Batman in southeastern Turkey, SunExpress’ thrice-weekly service from its biggest hub in Izmir launched in May, and is one of six new routes launched so far in 2013, with five more earmarked to start this winter.

Founded in 1989 as a joint venture between Turkish Airlines and Lufthansa, SunExpress has used that time to expand its fleet to nearly 50 aircraft (currently operating 40 x 737-800s and 8 x 737-700s), carries more than seven million annual passengers and has established itself as one of the leading carriers between Germany and Turkey. In fact, the airline has the #2 spot in terms of scheduled traffic between the two countries, with a 19% market share, about two-thirds the size of market leader Turkish Airlines, which has nearly 50,000 weekly seats.

Based in Antalya, but with further hubs in Izmir and at Istanbul Sabiha Gökçen, the airline began domestic flights in March 2006. By launching its domestic operation in Izmir, Turkey’s third-largest city, this was a fresh approach to intra-Turkish services, which had previously tended to be centred on hubs in Istanbul and Ankara. The airline now operates to 17 Turkish airports (according to Innovata / Diio Mi) on an expanded internal network which has also seen domestic hub operations open up alongside the existing international ones at Antalya and Sabiha Gökçen. Its continued domestic expansion has seen the significance of its Turkish home market take on even more prominence over the past few years.

The latest piece in the airline’s developing network jigsaw came in 2011, with the foundation of sister company SunExpress Germany (operating under IATA code XG), resulting in the carrier starting routes from Germany to Egypt and Tunisia. However, both country markets still represent less than 2% of the two airlines’ weekly flights in S13 and W13.

Although both airlines are scheduled carriers, there is still a significant seasonal element to the combined flying programmes. Comparing a week’s schedule in August 2013 with a week in December, the number of weekly flights will have been slashed by 24% come the winter. Airports being operated from through the summer, but which will not be flown to during the winter, include three in Austria (Graz, Linz and Salzburg) two in Germany (Frankfurt Hahn and Münster/Osnabruck) and one in Turkey (Elazig). However, both Leipzig and Paderborn in Germany will be added for the winter, meaning that net destinations falls by four from 42 to 38. 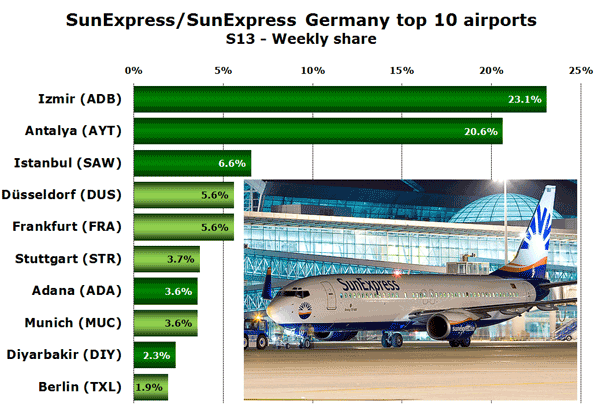 Again comparing summer and winter schedules, Berlin Tegel is not in the top 10 airports in W13, falling to #14, and is replaced by the eastern Turkish city of Van. The German capital however does not suffer the biggest frequency cull between the seasons (-43%), this unenviable accolade goes to Frankfurt which will see a 44% reduction, with Düsseldorf not far behind at -39%. Only one of the top 10 routes will actually see any frequency growth this winter – namely Diyarbakir in south-eastern Turkey – which will receive another two weekly frequencies from both Izmir (up to double-daily) and Antalya (up to daily), to register its planned 24% growth.

These top 14 routes represent 44% of the two airlines’ total weekly seats for the representative week. Annual growth across the international routes in the graph since August 2012 is 17%, with a 43% increase on the Antalya to Stuttgart route being the most significant capacity hike. There are no routes registering a yearly decline, although weekly flights between Antalya Frankfurt and Munich have gone unchanged. 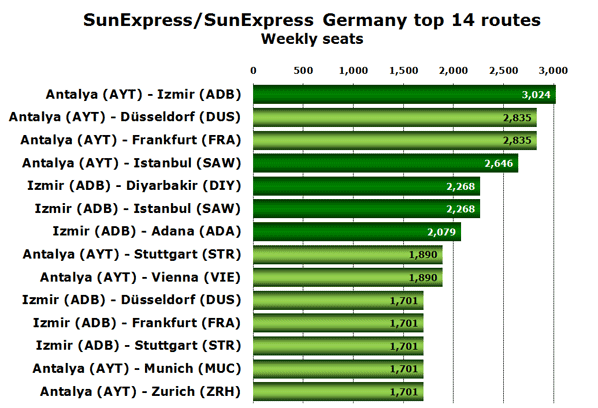 Since the start of 2013, the carrier has launched six new routes, all from its main operational hub in Izmir – with two to Germany (thrice-weekly, Frankfurt Hahn; weekly, Bremen), one each to Turkey (thrice-weekly, Batman), Sweden (weekly, Stockholm Arlanda), Norway (weekly, Oslo) and France (weekly, Strasbourg). In May, SunExpress Germany had intentions to launch flights to Erbil in Iraq from Düsseldorf, but these appear to have been shelved for now.

Consulting anna.aero’s New Route Database for the remainder of 2013, the two airlines have five new services on the cards. Three new routes from TAV-operated Gazipaşa Airport to Germany are planned to launch in November, with flights to Düsseldorf (three per week), Frankfurt (two) and Leipzig (two). More interestingly perhaps, SunExpress will begin daily flights from Sabiha Gökçen to Düsseldorf (27 October) and Munich (30 January 2014), operated on behalf of one of its parents, Turkish Airlines, as the national carrier continues its expansion from the Istanbul airport.