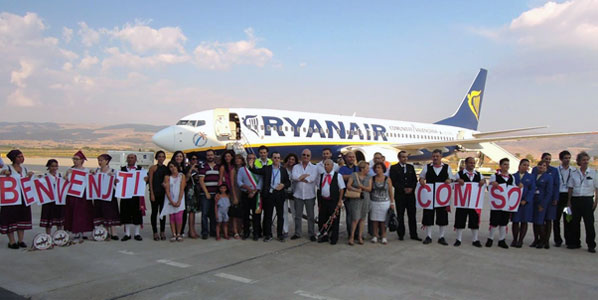 Comiso Airport (CIY) in the province of Ragusa, is Sicily’s newest commercial airport. Last week Ryanair became the first scheduled airline to operate services at the airport, with flights to Rome Ciampino operating six times weekly. Comiso thus becomes Ryanair’s 22nd Italian airport, with additional services to London Stansted and Brussels Charleroi slated to start in mid-September. Ryanair now operates 51 routes across the four international airports in Sicily; 37 at Trapani, 12 at Palermo and one each at Catania and Comiso. Analysis reveals that 41% of Ryanair’s operations in Sicily are domestic services. 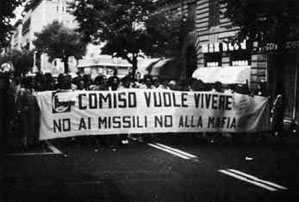 1983: Women from across the world descend on Cosimo to protest at the arrival of nuclear Cruise Missiles at the base. Most of anna.aero's management (combined age 783) recall 1983 in colour; so we have no idea why this photo is so grainy and black and white. Similar protests are expected soon concerning Ryanair's one carry-on bag policy.

Comiso has been a military base since the 1930s and was used by both German and American occupiers in WWII. In 1954, following a post war period of disuse, Alitalia reportedly commenced commercial operations alongside the Italian air forces. But, despite upgrades to its infrastructure, the site was little used.

In 1981, Comiso was selected as the second European base for Ground Launched Cruise Missiles and experienced three large anti-nuclear demonstrations in 1983.  By then Comiso was the largest NATO base in Southern Europe, although the end of the Cold War soon succeeded where the protestors had failed, and the base closed in 1991.

Happily the huge investment in runways was not wasted and on 30 May 2013 Comiso was re-opened for commercial and civil use following an extensive refurbishment to convert the site – work first completed back in 2008. 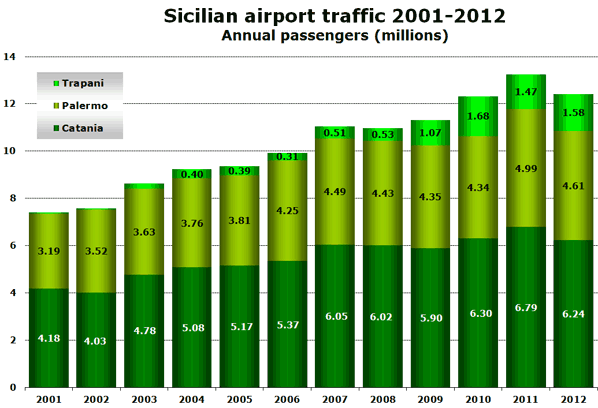 Trapani is Sicily’s least busy international airport, last year handling1.58 million passengers. In the 1990s the airport only operated one flight to Pantelleria Airport, a small Italian island in the Strait of Sicily. The airport was relaunched in 2003 by the Province of Trapani and only grew in size after Ryanair started to use it as its main hub to Sicily. Trapani now receives 73% of the carrier’s Sicilian operations.

The future for Comiso is currently painted blue and yellow as the airport awaits the launches of Ryanair’s second and third routes in mid-September. There is still no word on the street if the new kid on the block will have any new friends any time soon, so for Comiso, time will tell. If Ryanair can prove that there is a market in Comiso, there is no doubt that other carriers will then try and cash in on the opportunity, but is four airports one too many for Sicily, or will Ryanair be the kick-start Comiso needs, just as the ultra-low cost carrier was for Trapani back in 2003?