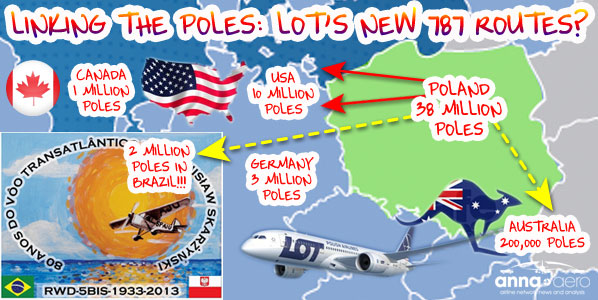 Saturday 10 August 2013 was a momentous day for LOT Polish Airlines. For the first time, all of its long-haul destinations (Beijing, Chicago, New York and Toronto) were served only by its fleet of five Boeing 787 Dreamliners. These are the airline’s four biggest routes from its home base at Warsaw Chopin Airport, with the transatlantic destinations alone accounting for just over half of all the airline’s ASKs (Available Seat Kilometres) from the airport. Given the aircraft’s superior operating economics compared with the Boeing 767s that it replaces, the airline will hope that this might signal the start of a major improvement in its financial performance. It lost over $120 million in its last financial year, and it is also hoping for compensation from Boeing regarding the grounding of the 787s earlier this year. 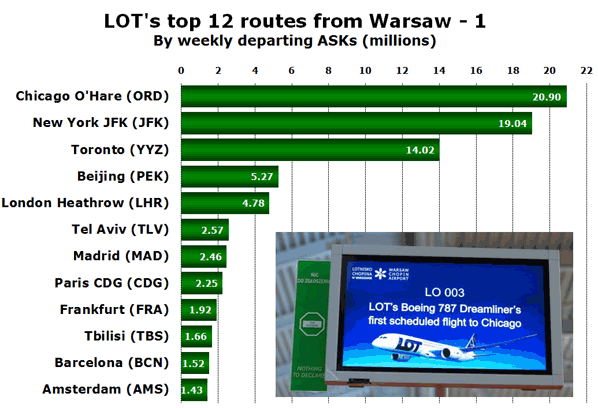 Unlike Hungary’s Malév, with which there are some very superficial comparisons, and which had no domestic network to support long-haul services, Poland’s larger geographical size and much bigger population results in LOT’s top three routes, as measured by weekly seats, all being domestic. The airline’s transatlantic routes all offer more weekly seats than any of the European airports served, apart from London, and Frankfurt. 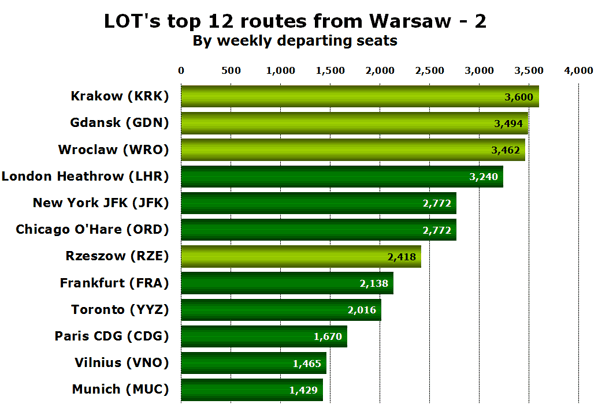 LOT and eurolot – really helping each other?

Formed in 1996, eurolot (which has its own code of K2), operates flights both under its own name (via its own website) and also on some regional and domestic services on behalf of LOT. Between them the two airlines operate a fleet of over 60 aircraft, which is notable for not including any Airbus and just a handful of Boeing aircraft. Its short and medium-haul fleet comprise a mix of ATRs, Bombardier Q400s, and over 30 Embraer E-jets, and just four pretty old 737-400s. Analysis of schedule data over the last couple of years shows that routes are occasionally passed between the two carriers.

eurolot has been keen to test regional domestic routes in Poland, and operates three from Gdansk; to Krakow, Wroclaw, and most recently to Lublin. In a bold move to try something different, the carrier began low-frequency seasonal domestic flights in Germany in May, linking Cologne/Bonn and Dortmund, with Heringsdorf, on the island of Usedom in northern Germany. Exactly what the EU was designed to encourage: Poland's eurolot began weekly, summer services linking the German airports of Cologne/Bonn and Heringsdorf in May, replacing airberlin which had withdrawn from the route.

In fact, given the financial issues surrounding the airline, its route network has remained surprisingly stable in the last 12 months. US flights to Newark ceased at the end of last October, while the airline’s three-times weekly service to Donetsk in Ukraine stopped being served at the end of March this year. The highest profile route casualty so far has been the double-daily service to Berlin Tegel, which ended on 31 July. airberlin had started competing on the relatively short 525-kilometre route at the end of March, with up to three daily flights using Q400s.

The German market clearly remains challenging for LOT, as it resumed services to Stuttgart last November (which are still operating), but also re-introduced flights to Hannover last October, which only lasted until early February. Stuttgart 1, Hannover 0 – not a score from the German Bundesliga, but the result of LOT's attempt to grow in the German market. Both routes were started from Warsaw late last year, but while the Stuttgart route has survived, the Hannover route was dropped in early February.

After moving its Warsaw operations from Chopin to Warsaw Modlin airport last summer, Wizz Air has decided to return permanently to Warsaw Chopin, after a number of operational issues at the end of last year led to a temporary closure of the new, lower-cost airport. Direct competition from Ryanair at Warsaw Modlin may also have been a factor. Ryanair is also still operating from Chopin, but is considering a move back to Modlin from the end of October.

In the last 18 months, apart from the Ryanair services, and the short-lived OLT Express, several other carriers have added Warsaw routes to their networks. These include Aegean Airlines to Athens, airberlin to Berlin, Air One to Milan Malpensa and Venice, Emirates to Dubai, Qatar Airways to Doha, Ukraine International Airlines to Kiev, and WOW air to Reykjavik.

Excluding the airline’s long-haul and domestic destinations from Warsaw, LOT faces direct competition on 14 of its top 20 international routes (as measured by weekly seats), with only Brussels, Bucharest, Hamburg, Madrid, Milan Malpensa (Air One services ended in early February), and Vilnius having the luxury of no competing airlines.

On most of these routes ‘competition’ comes from legacy carriers, although given that LOT is a member of the Star Alliance, how much genuine competition there is on routes to Copenhagen (SAS), Frankfurt (Lufthansa), Munich (Lufthansa), Vienna (Austrian Airlines), and Zurich (SWISS) is a matter of debate.

More long-haul routes to be announced soon as three more 787s due?

With the operational issues that have affected the 787 in recent months hopefully all sorted, LOT can look forward to receiving the last three of the eight aircraft it ordered (seven of them as long ago as 2005) in due course. This will open up the possibility of more long-haul routes for the airline, though none have been announced so far.