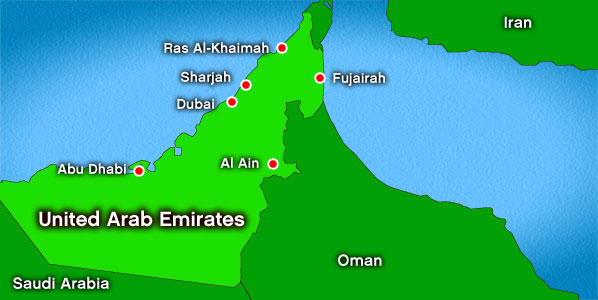 With an area slightly smaller than Austria and slightly bigger than Panama, the UAE has six international commercial airports, all vying for a piece of the passenger traffic action. Ras Al Khaimah International Airport, with approaching 500,000 annual passengers, currently holds #4 spot in terms of weekly capacity.

The UAE’s #4 airport in terms of weekly flights and capacity, behind Dubai, Abu Dhabi and Sharjah, Ras Al Khaimah International Airport serves the northern Emirate (there are seven in the UAE) of the same name. Home to RAK Airways, which following its 2010 re-launch has positioned itself as a ‘value for money’ airline, sitting between the region’s full-service and LCCs, is currently the only carrier serving the airport.

As the airport’s only serving scheduled airline at the moment (Belgium’s Jetairfly is planning to start operations in October), the fortunes of Ras Al Khaimah and RAK Airways are therefore very closely aligned to each other. The result of this interdependency has meant that the airport’s traffic has had to start again from nothing. So, to be expecting to get close to 500,000 annual passengers this year is no mean feat in the three years since operations recommenced. 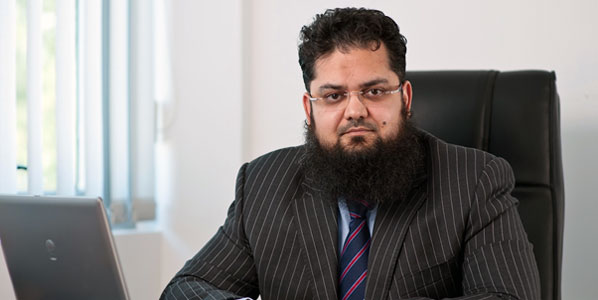 “Our passenger traffic is doing as we expected, but we may surprise everyone with planned announcements from RAK Airways to launch new routes over the next few months,” says Mohammed Qazi, the airport’s Commercial and Financial Director. He continues: “Plus we have a few other irons in the fire, which we will announce at a later stage.”

Regional destinations across the Middle East and Asia, dominate Ras Al Khaimah’s present network, with North Africa’s Egypt currently being the only country outside those areas.  As a result, the airport’s average sector length is around 2,100 kilometres, with Qatar’s Doha being the shortest at 441 kilometres, and Chittagong the longest, at 3,661 kilometres.

Doha claims the shortest sector length title for flights from Ras Al Khaimah following the loss of RAK’s double-daily service to Abu Dhabi, which last September, constituted 33% of the airport’s weekly seats and flights, and has seen the UAE (or domestic flights) removed from the list of served country markets. Clearly the 185-kilometre sector to the UAE’s capital, which was dropped to daily in October last year, before being dropped altogether in early March 2013, did not work for the home-based airline, and this spare capacity has since been reallocated. 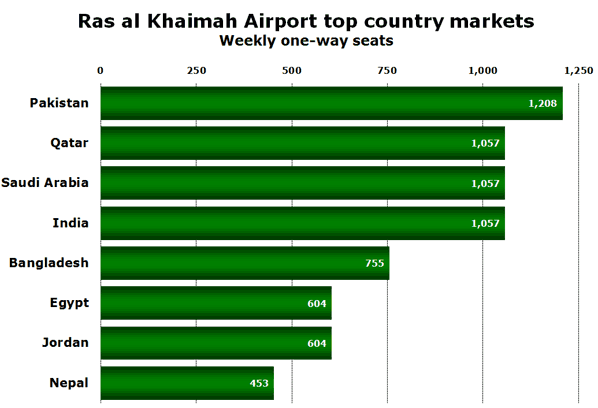 Pakistan’s lead as the most popular country market from Ras Al Khaimah comes as a result of RAK starting a twice-weekly service on 5 August to Islamabad, covered last week by anna.aero, complimenting the existing operations to Lahore and Peshawar. Indeed, this market’s annual growth has outpaced all of its peers, doubling in size since the same week in 2012. Others, like India and Saudia Arabia, have only managed 75% increases over the same period. Capacity to Egypt, Nepal and Qatar have gone unchanged in the last 12 months, while Jordan is a new country market this week, following the start of flights to Amman, which will be operated four times weekly.

Jeddah and Kozhikode up to daily

In the past year, the number of weekly flights operated from Ras Al Khaimah has increased by around 5%, the growth solely in the hands of the airport’s base carrier. Both Jeddah and Kozhikode have seen their respective schedules increased by 75% since September 2012, both now operated daily, alongside the short link to Doha. 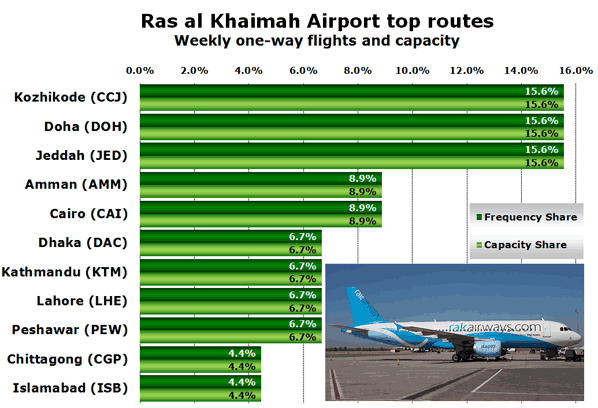 The future growth of Ras Al Khaimah would seem to be reasonably robust, given the fact that based carrier RAK is in talks with the major aircraft manufacturers for an order of “at least 10 single-aisle aircraft” to meet its expansion plans. With a decision likely by the end of this year or early-2014, the airline now plans to expand its network to 40 cities by 2015 with the aim of becoming a regional force in the already highly competitive UAE market.

In terms of getting other carriers into the airport, Qazi has a clear message: “We offer the most attractive and innovative deal structures in the region. We are only 45 minutes from Dubai and much closer to Dubai, Sharjah and other northern Emirates than Dubai World Central (where Wizz Air and nasair will be flying), which is 80 kilometres south of Dubai International. So, airlines, please think again where your future is better protected?”