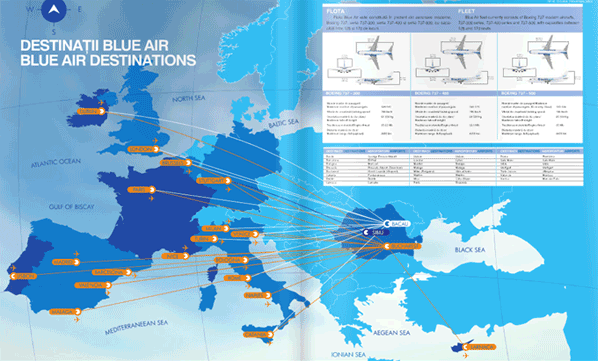 Go west! Blue Air's network of 27 routes (18 from Bucharest, eight from Bacau and one from Sibiu), are all to cities in the western part of Europe, with the exception of Larnaca in Cyprus. Italian routes account for 43% of the airline's weekly flights this summer.

Romania’s Blue Air has been operating since December 2004, but its future is far from certain after some recent issues regarding the airline’s ownership and investors. With a current fleet of six 737s (four -400s, one -300, and one -500), the airline’s summer schedule comprises 18 routes from Bucharest Otopeni Airport, eight routes from Bacau Airport, and one from Sibiu Airport. In terms of weekly departures there are 79 from Bucharest (71%), 29 from Bacau (26%) and three from Sibiu (3%). In total, nine different country markets are served, with Italian routes accounting for 43% of the airline’s weekly flights, followed by Spain, with 14%.

Blue Air is the third biggest airline at Bucharest Otopeni airport with around 11% of weekly seat capacity, behind TAROM (28%) and Wizz Air (22%). Maybe not surprisingly, it faces direct competition on 15 of its 18 routes at the airport. Wizz Air competes directly on nine of the 18 routes while TAROM competes on seven. Alitalia, TAP Portugal and Vueling also provide competition on a variety of routes. 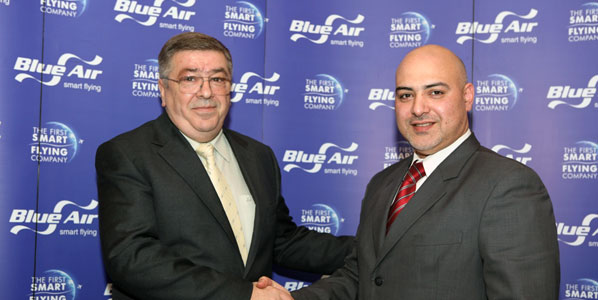 Hi and good-bye: Gheorghe Racaru (left), a one-time GM of Romania’s national airline Tarom, was the founding General Director of low-cost Blue Air, serving 2004-2009, and returning to the job in January again this year after the "amicable" departure of Sherif Ussama (right).