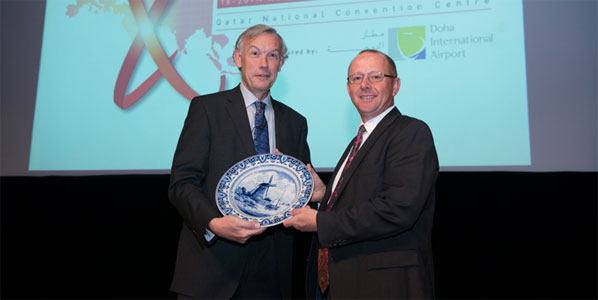 The State of Qatar gained independence in 1971, and thanks to its oil wealth has, in recent years, begun to make a major impression on the world stage. One of its leading promoters is the country’s national airline, Qatar Airways, which began operations in 1994 and has grown rapidly in recent years under the leadership of CEO Akbar Al Baker. The carrier currently has a fleet of over 120 aircraft, which includes a small number of pure freighter aircraft. Unlike its local rival Emirates, which only operates widebody aircraft, Qatar Airways operates a mix of single-aisle and twin-aisle aircraft. Its short-haul fleet comprises all A320-series aircraft, while the long-haul fleet is a mix of A330s and A340s, as well as 777s and more recently 787s. The new Hamad International Airport in Qatar is scheduled to open later this year, with a planned capacity for up to 50 million passengers when fully completed. The existing Doha Airport handled just over 21 million passengers last year, an increase of 17% on 2011.

The difference between the two nations does not end there. Whereas Dubai and the UAE is predominantly chasing the tourism dollar, Qatar has elected to follow a different path by trying to attract business people, and in particular, is building up its conference and exhibition portfolio. The 551-metre and 112-storey high Doha Convention Center Tower (set to be the world’s second tallest tower), which will open in Q4 2015 in the West Bay Area, is just one example of how Qatar is pursuing this different path.

The current Doha Airport has grown rapidly in the last five years. In 2007 the facility handled less than 10 million passengers, but since then passenger numbers have grown each year by at least 15% per annum, except for 2009 when traffic grew by a more modest 7%. In 2012, driven by the dynamic growth of Qatar Airways, the airport saw an increase in passengers of 17%, resulting in over 21 million passengers passing through the airport’s terminals. For the first half of 2013, the airport’s growth trajectory has been moderated, but at 8%, it will still be the envy of many global airports. For the full year, the airport is predicting double-digit growth approaching 11%. 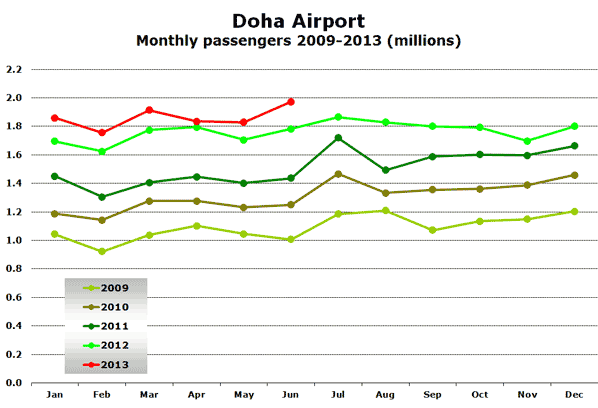 Although considerably smaller than Emirates in terms of total passenger numbers, Qatar Airways’ network is rivalling that of its bigger rival, though with lower frequency and smaller aircraft on many routes. Since the beginning of 2010 the carrier has launched scheduled passenger services to more than 40 destinations across the globe. Europe has been a major focus for expansion in recent years, but in 2013 the airline appears to be concentrating its route development on destinations closer to home, with new routes to Basra (Iraq), Gassim (Saudi Arabia), Najaf (Iraq), and Salalah (Oman) already launched in 2013, along with longer-haul services to Chicago O’Hare (USA) and Phnom Penh (Cambodia).

With Qatar Airways set to join the oneworld alliance within the next 12 months, it is not clear what impact this may have on the airline’s network strategy, but Philadelphia in the US is currently the only destination scheduled to launch in 2014. Since the beginning of the year Qatar Airways has added new routes to six destinations, including Chicago (USA), Najaf (Iraq) and Salalah (Oman). Unlike its bigger local rival Emirates, which only operates widebody aircraft, Qatar Airways uses a mix of widebody and narrowbody aircraft, enabling it to launch services on some 'thinner' routes.

With a small local population, and a developing tourism and conference market, Qatar Airways is heavily reliant on connecting traffic at its Doha hub. Analysis of the airline’s arrivals and departures for a particular day (Monday 9 September) reveals how the airline’s 170 daily departures and arrivals are spread across four main ‘banks’ of flights across the day. On this particular day the airline’s busiest hours for movements is between 23:00 and 23:59 when there are 25 movements (22 arrivals and three departures), as well as between 01:00 and 01:59 (one arrival and 24 departures). Just two hours later there are just two aircraft movements. 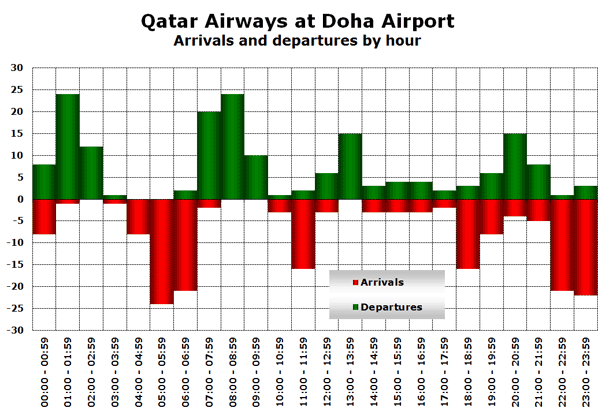 Qatar Airways accounts for just over three-quarters of all flights at Doha Airport. Around 30 other airlines offer scheduled services at the airport, with Emirates and flydubai leading the way with around 4% of seat capacity each, on their services to Dubai, located less than 400 kilometres away. Etihad Airways and Gulf Air also offer multiple daily flights to nearby Abu Dhabi and Bahrain respectively. European carriers present at the airport include British Airways, KLM, Lufthansa and Turkish Airlines, while Jet Airways is the leading Asian carrier offering daily flights to Delhi, Kochi and Mumbai. From June, Pegasus Airlines of Turkey joined Air Arabia and flydubai as recognised LCCs operating at the airport, offering flights from Istanbul’s Sabiha Gökçen airport.

To help facilitate further air transport growth, Qatar has invested in an all-new facility, to be known as Hamad International Airport, which is scheduled to open later this year. With two 4,000-metre runways, and with phased terminal developments, the airport will be capable of handling at least 50 million passengers per annum. In terms of global events, Qatar already hosts a round of the international MotoGP series (held under floodlights at night), and has held an annual Tour of Qatar cycling event each February since 2002. However, the country’s most ambitious challenge will be the hosting of the FIFA football World Cup in the summer (or now possibly winter) of 2022. Due to concerns about the intense temperatures likely at that time of year, Qatar plans to build football stadia with a form of air conditioning. At the current rate of development it is quite possible that by then Qatar Airways will serve every country that qualifies for the event.