Aurigny to replace ATRs on Guernsey-London Gatwick route with Embraer jet from next March, as flybe departs market The decision to purchase a new Embraer E-195, to operate the London Gatwick service from next summer, may be financially supported by the State of Guernsey's agreement to act as guarantors, but that doesn't mean Aurigny is going to cut back on its fund-raising from other sources, such as selling branded toys and books featuring "Joey" a Britten Norman Trislander.

According to anna.aero’s analysis of schedule data for this month, just two carriers are operating turboprop aircraft into London Gatwick, the world’s busiest single-runway airport. The first carrier, flybe, recently announced that it would be terminating its operations at the airport (a total of seven domestic routes), at the end of the winter season (29 March 2014), citing a disproportionate increase in landing charges for smaller aircraft, as the airport tries to maximise its passenger throughput. The other carrier is Guernsey-based Aurigny Air Services (branded as aurigny.com), which operates up to six daily flights from Guernsey using its fleet of three ATR 72s.

One of the routes that flybe is dropping is, coincidentally, to Guernsey. This has led to Aurigny announcing last week that it intends to acquire a brand new 122-seat Embraer E-195 to operate its Gatwick route from next June, though it will lease a similar aircraft to operate the route from the end of March until June. This will not only compensate the market for the loss of flybe’s capacity, but will also help reduce Aurigny’s unit costs on the route. However, this is still a major, and potentially risky, investment for an airline that has, in recent years, carried between 400,000 and 500,000 passengers each year. 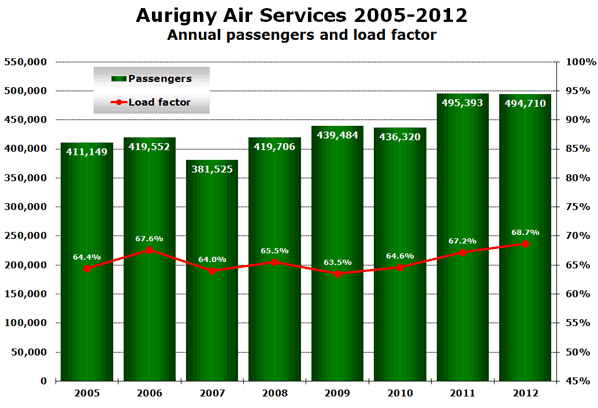 Impressively, for an airline that operates almost entirely domestically, and operates small aircraft (in addition to the three 70-seat ATR 72s, the airline also has six 16-seat Britten-Norman Trislanders), the airline’s annual average load factor usually hovers between 65% and 70%. Although the Trislanders have 16 seats, the airline confirmed with anna.aero this week that due to payload limitations it only sells a maximum of 15 seats on routes between the Channel Islands, and 14 seats on the routes to Southampton and Dinard.

The Guernsey-Gatwick route already represents around 34% of the airline’s weekly seat capacity, though the Guernsey-Jersey route is flown with higher frequencies (up to 11 flights per day), but with smaller aircraft. Upgauging the Gatwick route from the ATRs to an E-195, would mean that the route would then represent nearly 50% of Aurigny’s weekly capacity. However, in reality the  E-195 will probably operate a maximum of four daily rotations, with ATRs operating the rest. 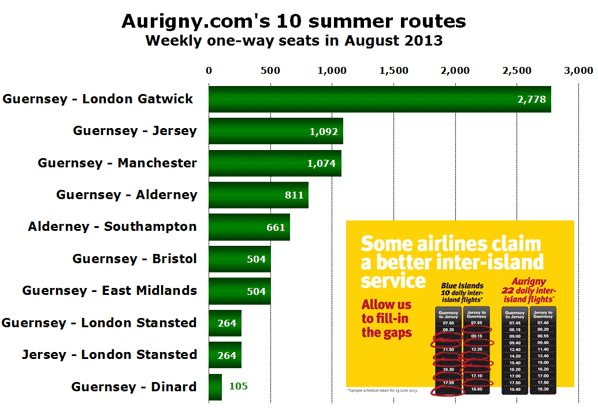 In summer, Aurigny operates 10 routes, eight of them from Guernsey Airport, where the carrier accounts for almost 60% of all flights, and almost 50% of all capacity, as measured by available seats. flybe and Blue Islands account for almost all of the other capacity, with airberlin operating seasonal services to Düsseldorf. Apart from daily flights to Dinard, Aurigny’s only other route to mainland Europe is a winter-only service to Grenoble, aimed at the local ski market. At Alderney Airport, Aurigny is now the only commercial operator, with services to Guernsey and Southampton.