Italian airport passenger numbers down 3.3% in first half of 2013; international routes show 1% growth 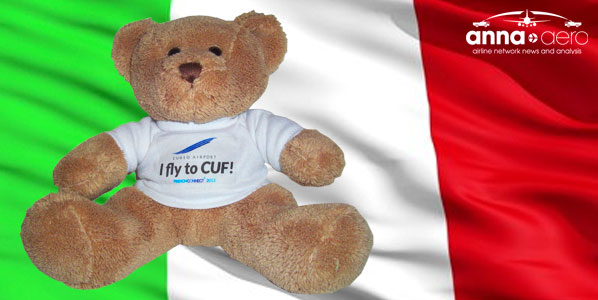 The bear necessities of airport marketing. Cuneo Airport was Italy's fastest-growing airport in the first half of 2013, with passenger numbers up 29%, thanks to new routes from Ryanair to Alghero (launched 9 November 2012), Marrakech (23 April 2013), and Rome Ciampino (31 March 2013). 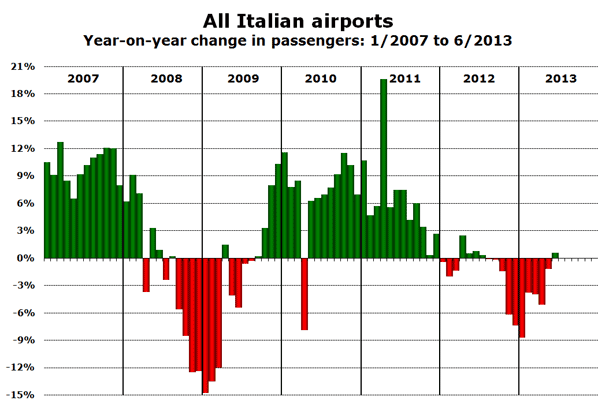 Of the 38 airports for which Assaeroporti reports traffic data, just 10 have reported growth in the first six months of this year, with Cuneo (+29.1%) leading the way. Trapani (+17.2%) and Perugia (+12.4%) also reported double-digit growth. Among the country’s top 10 airports, only Bologna (+6.2%) and Venice (+4.9%) increased their passenger numbers in the first half of the year.

A look at the year-on-year growth rates since 2009 of Italy’s leading airports, shows how Venice Marco Polo Airport benefited in the summer of 2011, from the closure of nearby Treviso Airport for runway works. Another significant event, was the collapse of Catania-based Wind Jet last August. However, the big drop in the airport’s traffic in November had less to do with airline closures, and more to do with runway maintenance works. 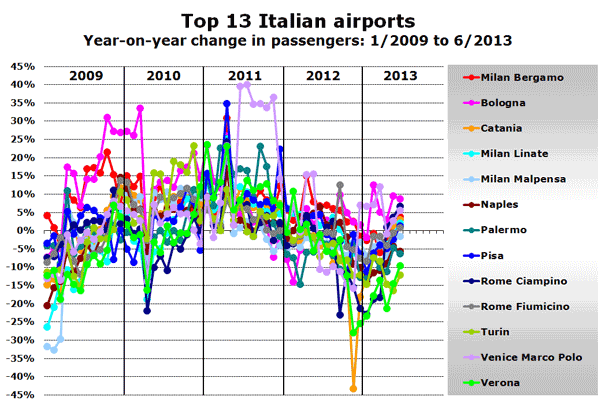 Volotea’s focus on domestic routes means that its share of the Italian domestic market (by weekly seat capacity) has grown from 1.4% in August 2012, to 3.8% this August. Alitalia and Air One combined have around 44% of the market, followed by Ryanair (23%), Meridiana (17%) and easyJet (8%).