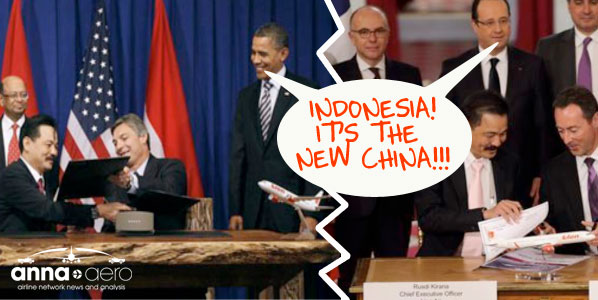 Indonesian low cost carrier Lion Air signs “the largest aircraft order in history” in March 2012 for 230 737-900ER/737 MAX worth $22billion. Then, in March 2013 with another President watching, Lion Air breaks own record with an order for 234 A320/21neo/ceo worth $24 billion. Capacity growth at Chinese airports in August is just over 12%, overtaken by Indonesia with nearly 25% growth!!! Trivia: Obama lived in Indonesia for four years and says: “America has a stake in an Indonesia that plays its rightful role in shaping the global economy.”

The latest edition of Boeing’s annually updated Current Market Outlook (2013-2032) predicts that demand (as measured by RPKs – Revenue Passenger Kilometres) in the Asia-Pacific region will grow by an average of 6.3% per annum during the next 20 years, and that by 2032 the region’s airlines will account for over one-third of the world’s fleet of commercial aircraft, up from around 24% at present.

Last year when anna.aero looked at what was happening to Asia’s leading airlines, airports and country markets, the analysis was dominated by China’s growth, which far exceeded that of the rest of Asia. So what has changed 12 months on?

Using schedule data provided by the airlines to Innovata, a comparison has been made between the months of August 2012 and August 2013, for all the airports designated as being in Asia. This does not include Australia and New Zealand. Since last year, the biggest change has been that the airlines comprising the AirAsia group, have passed Japan Airlines to break into the top 5 in the region. Hainan Airlines and Shenzhen Airlines, have both moved up a place in the top 10, as Korean Air drops two places to number 10. 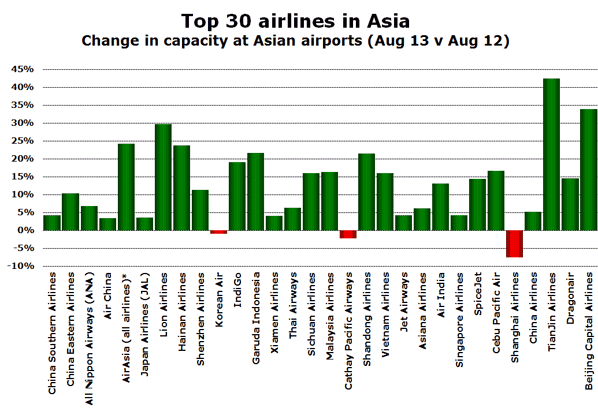 After the recent problems in the Indian market, it is good to see both Jet Airways (+4.3%), and Air India (+13.0%) growing once again, joining IndiGo (+19.1%) and SpiceJet (+14.4%), as the Indian market appears to be regaining some growth momentum. It is worth noting that although all of the top 30 airlines are, not surprisingly, based in the region, Dubai-based Emirates ranks only just outside the top 30, in 33rd place.

In 2012 China’s airports handled just over 680 million passengers, 9.5% more than in 2011. CAAC data for the first half of 2013 indicates that Chinese airlines have carried around 11% more passengers than in the same period in 2012. Capacity growth at Chinese airports in August of this year is just over 12%. Whereas last year, China’s capacity growth was higher than for any other country in the top 12, this year it ranks only fifth by that measure, behind Indonesia, Malaysia, Vietnam and Thailand. Indonesia’s rapid growth has enabled it to move up to third place, pushing India down to fourth. Malaysia has benefited from the arrival of Lion Air’s Malaysian partner airline Malindo Air, which launched services this year. 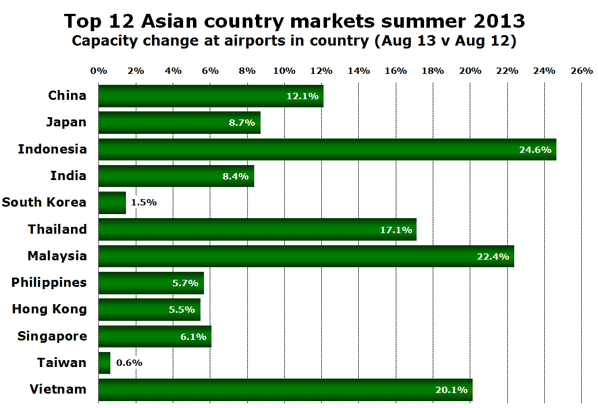 Japan and India both report growth of between 8% and 9%, while South Korea (+1.5%) and Taiwan (+0.6%) are the slowest growing major Asian country markets.

Asia’s top 30 airports account for around 53% of all scheduled seat capacity across Asia, but although capacity was up 8.6% at these airports, capacity across all other airports combined was up almost double, at 15.0%. Among the top 10 airports, Beijing’s capacity is up less than 2%, while seat capacity at Bangkok’s main airport is down just over 2%, as a number of carriers have been allowed to transfer flights back to Bangkok’s older Don Mueang airport. Jakarta’s rapid growth (+20%) has seen it move past Hong Kong into third place. 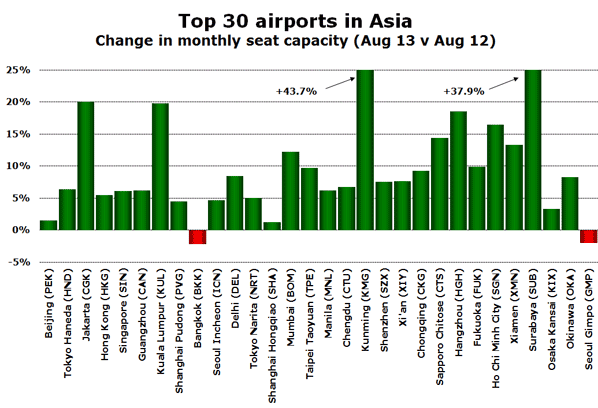