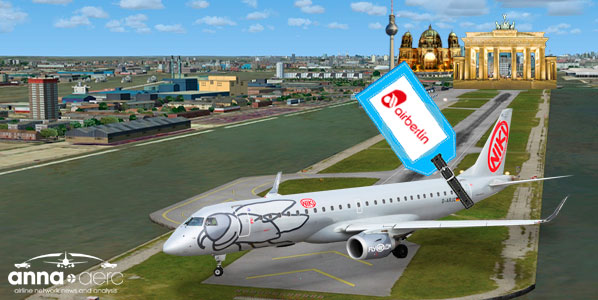 Leak of the week: anna.aero has learned airberlin is planning London City Airport services – most likely to Berlin, possibly using more E190s from its NIKI subsidiary. The downtown airport in the revitalised Docklands will be airberlin's third London airport attempt following adventures at Stansted and Gatwick.

anna.aero has discovered that airberlin is considering operations into London City Airport, with Berlin services on the top of its route shopping list. airberlin has had a very confused market strategy for the UK capital over the last decade. Previously it built a ‘hub’ at London Stansted which, as recently as September 2006, boasted 143 weekly flights to 12 destinations, including UK domestic operations to Belfast City, Manchester and Glasgow. Then airberlin moved its Hannover and Nuremburg services to London Gatwick in February 2011. Hannover services lasted only five months, while Nuremburg faired better, being operated until January this year. So the London City move would be an interesting one for several reasons, although when questioned on the potential switch an airline spokesperson stated: “At the moment, airberlin is not considering operations from London City Airport.”

New flights to Berlin (or Munich or Hamburg or Stuttgart)

Looking at the existing London City network of German destinations there are currently 63 weekly services spread across five points, but still some obvious gaps. Missing from the table below, as well as being the most likely new route, is a service to Berlin. With 757 weekly flights it is easily airberlin’s biggest hub, being over a third larger than #2 airport Düsseldorf. Lufthansa CityLine last operated this route, with up to 18 weekly Avro RJ85-operated services being terminated in March 2009.

The airline’s second most prominent base at Düsseldorf (567 weekly flights) has been excluded from the potential route list (for reasons, see below). In addition, so has airberlin’s #3 airport, Palma de Mallorca (488), which is currently operated by BA CityFlyer from London City nine times weekly by E170/E190 equipment, a route that could well see an AB code added in order to feed the German carrier’s hub on the Balearic island.

This then leaves currently unserved potential route options from London City being Munich (#4, 280), Hamburg (#5, 208) and Stuttgart (#6, 183), none of which are airberlin hubs as such, and would therefore be reliant on point-to-point demand. Munich was most recently served by Lufthansa (operated when the route closed by Augsburg Airways Dash 8 Q400s), with at its peak up to 18 weekly flights. However, the route was terminated last October. Older London City schedules have to be consulted to unearth the last time Stuttgart and Hamburg were operated, with the former being operated by Lufthansa (with both routes ultimately being flown by Contact Air ATR-42 500s) with up to five weekly services until July 2008, with Hamburg lasting until November 2008 (with 11 weekly rotations).

airberlin’s only remaining London Stansted operation is to Düsseldorf, operated 18-weekly with a mixture of Dash 8 Q400s and 737-700 equipment. On 1 September, BA CityFlyer launched its 17 weekly flights to the German industrial powerhouse from London City, using Eastern Airways Saab 2000 equipment. Perhaps airberlin’s heightened interest in the downtown London airport has been as a result of a drop-off in forward bookings following the start of services by the British Airways sub-brand. The result may well be airberlin’s final withdrawal from London Stansted, and the AB code appearing on the BA CityFlyer services from London City instead.

The obvious aircraft choice for any potential new route into London City, which has well-documented operational restrictions due to its runway length and stand sizes, would be airberlin’s Dash 8 Q400 fleet. None of the carrier’s A320 and 737 families of aircraft are currently cleared to operate into the London airport, however airberlin is currently utilising three E190s from its subsidiary NIKI, which would also be suitable. 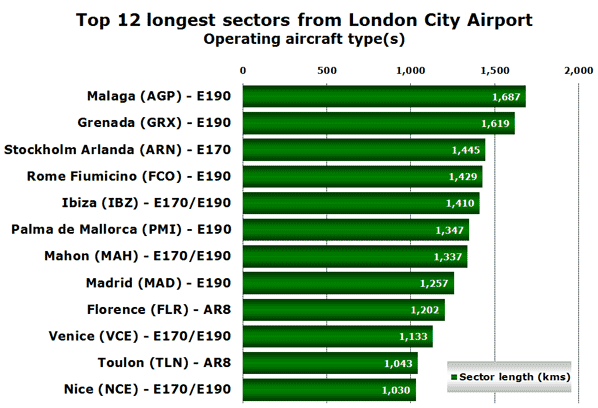 Aircraft selection will also determine which destinations can be flown. The above chart clarifies the current extremities of the London City aircraft performance envelope and the respective types, with the BA CityFlyer E170 and E190 fleets dominating the top 12. At less than 1,000 kilometres, all four prospective routes – Berlin (915km), Munich (911km), Hamburg (713km) and Stuttgart (726km) – seem to be well within the operational limitations (and all four routes have been flown in the past). Currently the only Dash 8 Q400 route into London City is flown by Luxair to Luxembourg (490km).

Why LCY and not LHR?

As a oneworld member, it seems strange that airberlin is considering flying to London City, albeit with its limited BA presence (the airline flies to 21 non-stop and one one-stop points – New York JFK via Shannon – from the airport), when there are much more obvious feeder benefits of flying into BA’s biggest London hub. For the week commencing 24 August, BA offers 131 direct and one-stop destinations from London Heathrow (and 48 from London Gatwick), but gaining access to a workable slot portfolio will undoubtedly be the largest barrier in making this particular ‘London strategy’ happen – although of course BA could always lease their German oneworld partner some slots. So it looks likely that for the time being airberlin will have to console itself with gaining access to London City’s high-yield, business passenger-dominated catchment instead.

As we write, anna.aero understands that German ‘turnaround specialists’ Intro Aviation is in exclusive talks with CityJet owners Air France-KLM to buy the business. Dublin-headquartered CityJet has been up for sale since September last year and is London City’s biggest ‘operating’ airline, with over one-third of all weekly flights. Air France – including CityJet and Loganair – is the largest ‘marketing’ airline at the downtown airport with 38% of weekly flights, slightly bigger than BA which has 36% (with BA, BA CityFlyer, Eastern Airways and Sun Air). Intro bought Deutsche BA from BA in 2003 for just €1 and sold the company to airberlin three years later. In 2006, it then acquired a controlling stake in the LTU Group, before selling it again to airberlin, this time in 2007. What odds on CityJet eventually ending up being run from Berlin, once the turnaround specialists have put the operation through the restructuring mincer in 12-18 months time? Anyone take us up on that bet…say €1??