Turkish Airlines entered the Cameroon market in December 2012, launching four weekly services to Douala and Yaounde with 737-900s. The carrier’s expanded Istanbul operations have thrust it into the top echelon of serving airlines in the Central African country.

Bordered by Nigeria to the west; Chad to the northeast; the Central African Republic to the east; and Equatorial Guinea, Gabon, and the Republic of the Congo to the south, Cameroon sits at the heart of Central Africa. With strong historical links to France (and to a lesser extent the UK), French and English are widely spoken, but the country is also home to over 200 different linguistic groups and around 20 million people. Cameroon’s largest city of Douala (apparently the most expensive place to live in Africa) dominates air traffic, with 63% of all weekly seats, while the capital of Yaounde has 27%. The remainder of services are split across the third city of Garoua, as well as Maroua and Ngaoundere.

Looking at the top carriers operating in Cameroon, there are no surprises that the de facto national carrier Camair-Co dominates (and has therefore been excluded from this analysis) as it controls nearly half of all flights (48%) and capacity (45%) in the Central African country. However, in the last 12 months, the biggest carriers in Cameroon have been joined at the top table by an array of new entrants. The #3 carrier is now Karinou Airlines from the Central African Republic, which has started seven international routes in the last year — six from Douala and one from Yaounde. Joining the Bangui-based airline as top airline newcomers are Turkish Airlines and RwandAir. 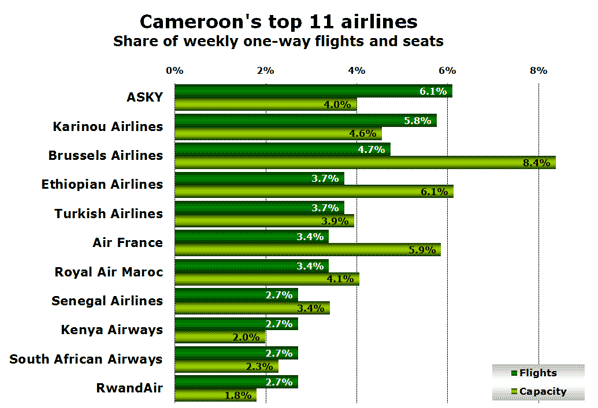 Camair-Co has maintained its #1 position in Cameroon with some impressive growth statistics in the last 12 months, adding an extra 70% more seats. Brussels Airlines has delivered an additional 25% more seats into the market since last September, increasing its Brussels services from 10 times weekly A330 operations to Douala and Yaounde to 14. The biggest capacity cullers over the past year have been Kenya Airways (-53%) and ASKY (-14%), with South African Airways and Senegal Airlines maintaining their respective capacities.

Only two of Cameroon’s top non-stop routes are domestic — namely the services linking the nation’s biggest two cities of Douala and Yaounde, as well as the operation linking the fourth and fifth cities of Maroua and Ngaoundere. Only three of the top routes have a destination outside of Africa, with unsurprisingly Paris and Brussels featuring highly (Istanbul is the only other non-stop European destination). 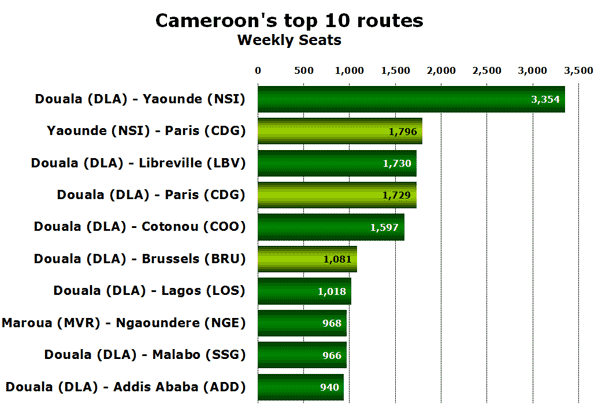 The biggest movers in the last 12 months have been the Douala to Lagos operation, which has shot-up eight places from fifteenth last September, along with Yaounde to Paris CDG, climbing by a more modest six places. As a result of the latter’s improvement in the standings, last year’s #2 route of Douala to Paris CDG has fallen by the most significant margin, dropping two places to fourth. Camair-Co’s eight times weekly 737 service from Maroua to Ngaoundere is the only new entrant in the top 12.