After not just one, but two months with one million passengers, Gordon Dewar, the Chief Executive of Edinburgh Airport, thanks passengers for being “one in two million”. To say thank you, the airport bought every departing passenger a cup of coffee on 30 August. Dewar said: “What a truly remarkable summer we’ve had. We want to thank each and every one of the two million passengers that travelled with us in July and August for choosing our airport and helping us to break records”. 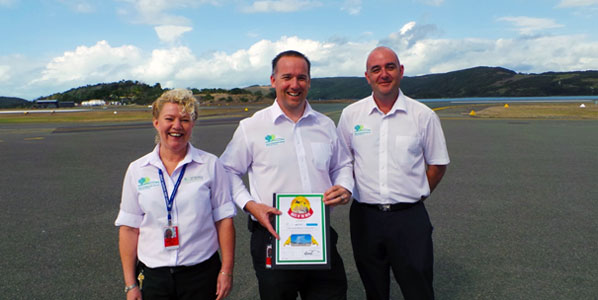 In recognition of Virgin Australia’s route launch on 15 August, anna.aero chose the new route between Melbourne and Hamilton Island as the deserved recipient for ‘Route of the Week’. Receiving the award at Hamilton Island Airport; Sharon Tushingham (Safety Officer), Paul Watson (Manager – Airport and Transport) and Warren Pearce (Assistant Manager Airport and Island Transport) pause for a photo.