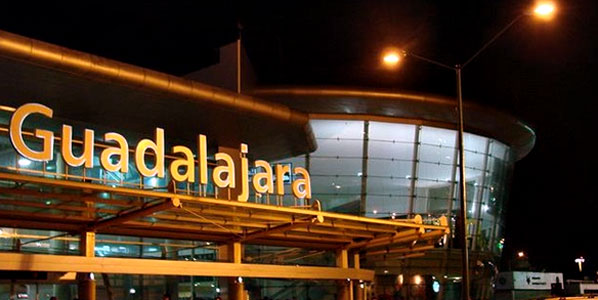 Guadalajara’s two latest route launches (domestic services to Reynosa and Torreon) were both courtesy of VivaAerobus, which now offers twice-weekly 737-300 services, and were simultaneously commenced on 2 September. The airport outperforms both Monterrey and Puerto Vallarta in the anna.aero SVID rankings and is on target to break an annual traffic milestone for 2013.

Guadalajara International Airport, Mexico’s third largest airport for passenger traffic, is a hub for both Aeromexico Connect and Volaris, the former being the regional subsidiary of the nation’s flag carrier, Aeromexico. The airport serves the City of Guadalajara, which has a population of just over one and a half million. The entire metropolitan area of Guadalajara includes seven adjacent municipalities, generating a combined population of four and a half million inhabitants, making it Mexico’s second most populous catchment behind Mexico City. The airport, which is located 17-kilometres south of Guadalajara, is served by ten operating airlines, with a network dominated by domestic destinations. 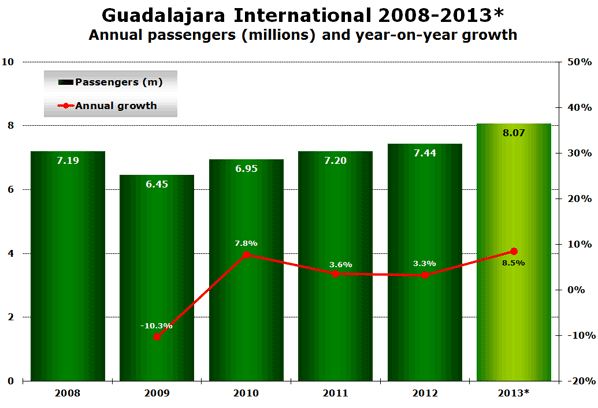 Despite a significant drop in passenger traffic between 2008 and 2009, the airport has since sustained growth over the past three years. More significantly, if Guadalajara maintains the 8.5% average growth rate recorded so far for 2013 (January to July figures), then the airport is on course to pass eight million annual passengers for the first time by the year-end. If this annual traffic result is realised, it will represent an increase in passenger traffic over the past four years of almost 24%.

Entering Guadalajara’s monthly passenger data for 2012 into anna.aero’s Seasonal Variation in Demand (SVID) calculator, the airport performs rather well, generating a score of 0.81, an “excellent” rating. Compare this to Monterrey International Airport’s 2012 score which is not as strong, achieving a result of 2.18 – “good”. Not a bad score for the airport which has well over 80% of its flights derived from the domestic market and was Mexico’s fourth busiest airport for passenger traffic in 2012. Perhaps more predictably, Guadalajara has beaten its closest geographical neighbour, Puerto Vallarta, (just over 200 kilometres away). The popular tourist destination on the Pacific coast, posted a “poor” score with a result of 10.18. The peak experienced by Puerto Vallarta is a trend most probably influenced by the spring break period in the US. So far, anna.aero has almost 50 seasonality performance evaluations, of which Guadalajara International Airport now ranks 15th place, nestling in between Tokyo Narita Airport (0.77) and Calgary International Airport (0.89). 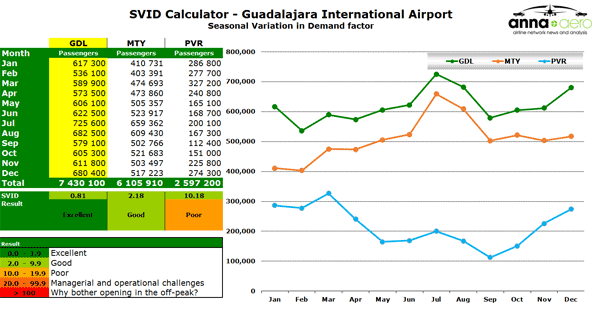 Unsurprisingly, it is Mexico’s three leading airlines which dominate the top spots at Guadalajara. Combined, the airlines control 77% of weekly flights and 78% of weekly seats. Although Aeromexico leads the table and markets the most weekly flights, Volaris commands the #1 spot for the number of weekly operated seats with a share of 38.7%. Mainline carrier Aeromexico only operates around a third of Guadalajara’s flights under the AM code; the remaining 65% of the flights are operated by Aeromexico Connect. The Mexican flag carrier recorded the biggest drop in weekly flights over the past twelve months (-8.9%), while Interjet boosted weekly flights, adding 37 more (+52.9%) than the same week last year. Interjet has increased weekly frequencies to; Tijuana (daily to twice-daily) and Mexico City (40 per week to 63 per week). In addition, the #2 carrier in Mexico has added a new route to John Wayne Airport, Orange County, CA (daily). Delta Air Lines has jumped from tenth to eighth, doubling its weekly flights, adding Los Angeles (daily) and increasing Atlanta from daily to eight-weekly. Overall, weekly flights are up at Guadalajara by 2.1%. The growth, albeit slight, is a positive sign for the airport. 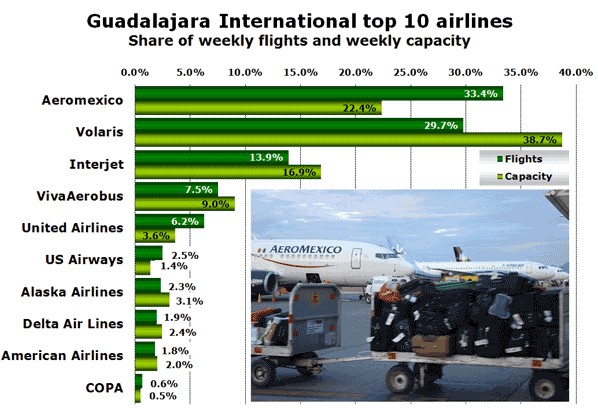 In the last 12 months, the state capital airport has not gained any extra airlines. However, Guadalajara has seen American Eagle Airlines drop its only service from Dallas/Fort Worth, bringing the total operations for American Airlines brand down by a third, to just 14 weekly flights. Most noticeably, Volaris holds the largest weekly capacity share at Guadalajara. The Mexican low-cost carrier has maintained the same percentage share as 2012, even though it offers 21% more seats than the previous year. Aeromexico’s seat share is down 4% on last year, ranking the SkyTeam airline in second. Overall capacity at Guadalajara is up 18% on the same period last year. Currently the airport has a portfolio of ten marketing airlines, a number which remains unchanged from the same period last year.

Mexico City continues to be #1 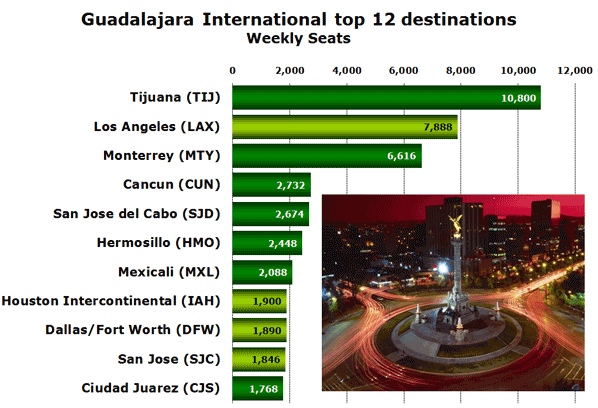