It’s a draw! Both Airbus and Boeing delivered 52 units each in July, but Boeing maintains its overall lead so far in 2013 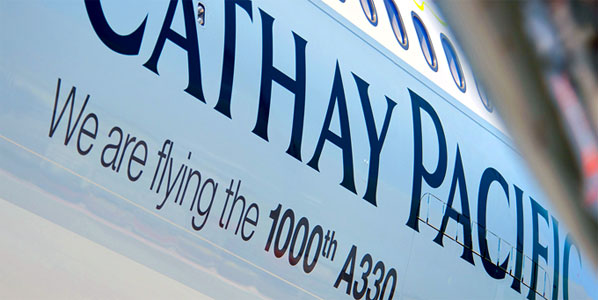 The 1,000th A330 was handed over to Cathay Pacific Airways during a special ceremony in Toulouse on 19 July. The aircraft, an A330-300, is the 56th A330 now in service with Cathay Pacific and its sister airline, Dragonair, making the two airlines the world’s largest operator of the A330.

In a bizarre coincidence, both Airbus and Boeing have matched each other’s delivery performance during July. Following the good results achieved by the two manufacturers over both May and June, Airbus and Boeing have once again returned an impressive tally, making it the best July since anna.aero began tracking deliveries in 2008. The combined deliveries of both producers for July was 104 units, with exactly 52 airframes each in July. Boeing has improved its performance compared with the same month last year, delivering seven more units. Airbus also noted an increase, delivering an additional five airframes compared to July 2012. American Airlines Chairman and CEO, Tom Horton, stood on the upper step leading to the carrier's first A319 at the Airbus Delivery Centre, Hamburg. Tom Enders, Airbus President and CEO, and John Leahy, Chief Operating Officer-Customers, joined Horton on the steps as part of the delivery ceremony. American’s Chairman and CEO described the day as “a milestone” in the airline’s regeneration programme. 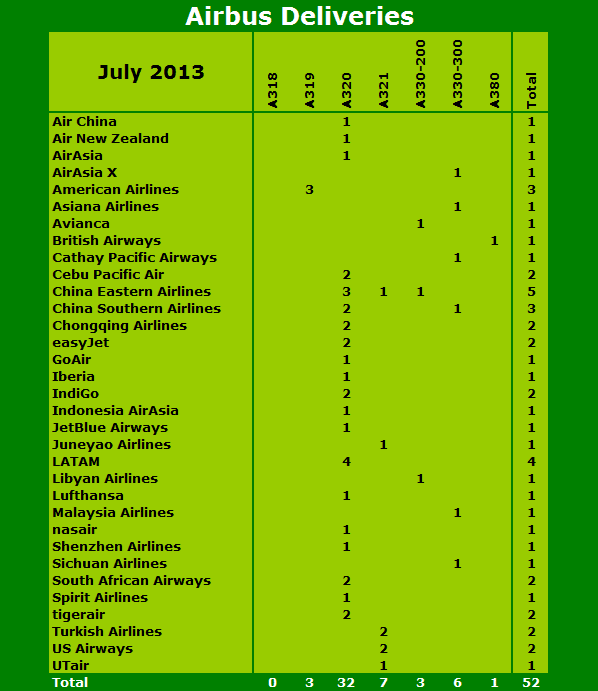 Single-aisle deliveries in July were led by the A320 (32 units) with an overall of 42 single-aisle jets provided to airlines worldwide. Two airlines in particular received four narrow-body units each from Airbus: China Eastern Airlines took delivery of three A320s and one A321, while LATAM received four A320s. The Chinese carrier in fact received a total of five airframes from Airbus in July, as its monthly deliveries also included an A330-200, making it the pan-European manufacturer’s largest monthly delivery to a single carrier so far this year.

Ten wide-bodies were delivered in July, the same amount as in the preceding month. Each airline received one wide-body airframe, including one A380 which joined the British Airways fleet. The oneworld airline took delivery of its first A380 on 4 July when the aircraft was welcomed into London Heathrow by staff in uniform waving flags. Keith Williams, Chief Executive said: “These aircraft are the start of a new era for British Airways and we’re delighted to be the first UK airline taking delivery of the A380. It is a great aircraft that has been developed with huge amounts of British engineering ingenuity and we believe it will prove very popular with our customers when it starts flying to its first destination of Los Angeles”. British Airways took its first A380 delivery last month. British Airways’ twelve A380s will accommodate 469 passengers across four cabins; First, Club World, World Traveller Plus and World Traveller. The aircraft has initially been deployed to Los Angeles, with Hong Kong and Johannesburg to be added soon. 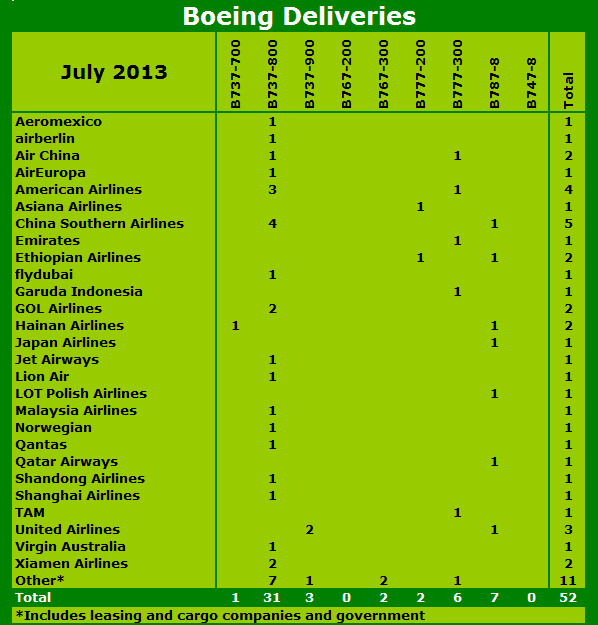 Airlines received a total of 35 single-aisle units from the American airframer, four less than in the preceding month. In July, China Southern Airlines and American Airlines were the largest recipients of the 737 family aircraft for the third consecutive month, as they took four and three aircraft respectively. Other carriers to receive more than one narrow-body unit from Boeing in July were Xiamen Airlines and GOL Airlines (two 737-800s each), as well as United Airlines (two 737-900s). Hainan Airlines took delivery of one 737-700 in July.

Five less wide-body units were delivered in July 2013 than in June, but the US airframer bettered its year-on-year performance, delivering five wide-body units more than the twelve it managed in July 2012. Following nine 787s delivered to customers in June, Boeing continued to work through its backlog with a total of seven units of the type reaching as many airlines. 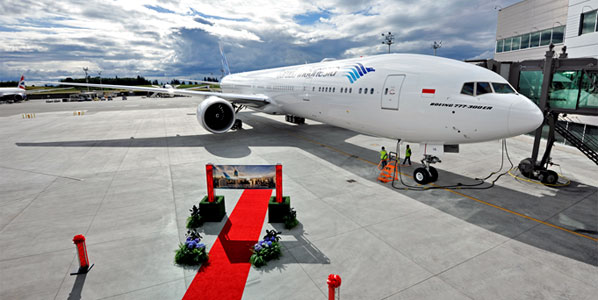 The arrival of Garuda Indonesia’s first 777-300ER was celebrated in Jakarta on 2 July. The airline configured its new 777-300ERs (first of ten ordered) with eight first-class suites, 38 business-class seats and 268 seats in economy class. Dinesh Keskar, Senior Vice President, Asia Pacific and India Sales, Boeing Commercial Airplanes, said: "We're proud to celebrate this milestone with Garuda Indonesia, I'm sure Garuda's passengers will notice the difference from the moment they step on and see the new interior."