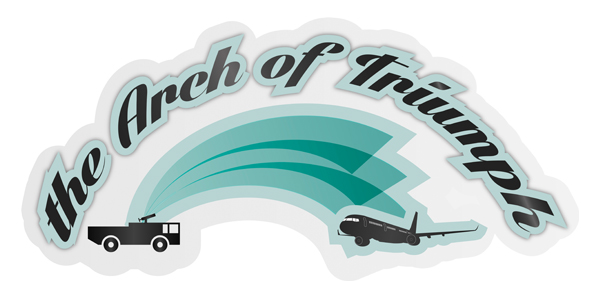 The Arch of Triumph Prize – a new Fire Truck Water Arch (FTWA) scoring system by anna.aero, which has become the only global standard for judging the quality of the fire chiefs’ traditional welcoming salute for new routes.

Having brought you Route of the Week (RoW) and the even more popular Cake of the Week (CoW), anna.aero is now launching a third weekly contest promoting excellence in the route launch marketing – the Fire Truck Water Arch (FTWA) scoring system. Weekly winners will be presented with the “Arch of Triumph Prize”. The airport that achieves the highest score in what remains of 2013, will also be crowned this year’s anna.aero Arch of Triumph Champion.

Unlike RoW and CoW, which are judged by a secret jury, the Arch of Triumph Prize is based on transparent voting by the anna.aero analysis team using their combined 75+ years of industry experience to rate each airport’s attempts at a perfect FTWA. Of course, we will need to explain the scoring so we get no complaints, because as you all know, here at anna.aero we strive to be honest and fair in all of our competitions.

The scoring starts at 10 (a perfect score therefore being 40, with four judges awarding marks) and points are deducted accordingly if a judge feels that the water arch has been poorly executed. For example, an imbalanced water arch (known in the trade as ‘big boy, little boy’), any applicable violations (such as fire truck misalignment) or a failure to take into consideration conditions on the day (perhaps resulting ‘wind-induced arch drift’, to use the now-accepted industry term) will result in a loss of points. The four individual judge’s scores are then added together to form the final score. Fire truck water arch fans will soon see ‘sack the chief airport fire officer’ scores in the 0-10 range; ‘urgent visit to the fire training ground’ in 10-20; ‘no need to polish their hoses this week’ in 20-30; and ‘buy the fire fighters another pool table for the station’ in the 30-40 range.

So, the challenge to airport PR and marketing teams is this: From now on the quality of your fire truck water arches are being benchmarked – so make sure you brief the fire chief on the importance of getting it right! 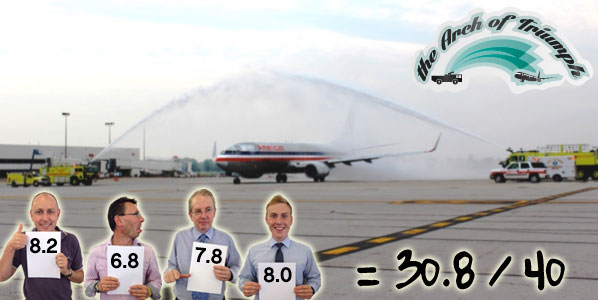 “O” wow: Port Columbus International Airport, Ohio, gets the inaugural anna.aero Arch of Triumph weekly prize for welcoming the new AA service from LAX on 27 August with a score of 30.8 (out of 40) for two superbly-executed ‘Leaping Dolphins’ arches.

Marc: 8.2. Some of the younger judges like the fact that there are other rescue vehicles in attendance. However, I’m a purist, and I like the simplicity of man, fire truck and airplane (for our US cousins) in my FTWAs. The apex of this arch is sat right above the centre of the aircraft’s fuselage which scores well for me. One thing is for certain – I shall be looking out for the next FTWA offering from Columbus, Ohio.

Paul: 6.8. If anyone knows what shape an “O” should be, you’d think Columbus “Ohio” would. It gets my best weekly score but there are many imperfections – the right hand monitor is pumping a tad too many revs, slightly straightening the “Dolphin-Leap” curve. There is no operational need for the other vehicles, they clutter up the symmetry of the salute and obscure the proud “Port of Columbus” livery on the trucks. Mark my words Columbus Ohio, you win this week, but the competition is going to get soooo“o” much harder.

Total: 30.8. According to the rule anything above 30 points is judged to be worth ‘buying the fire fighters another pool table for the station’. 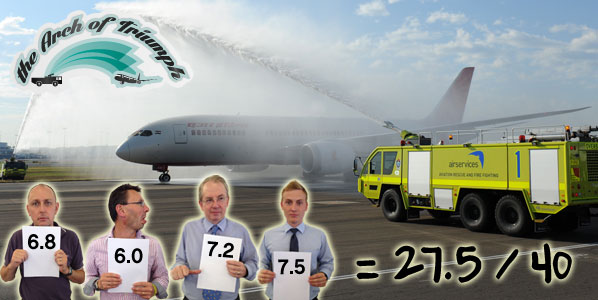 The welcoming silver arches of the Sydney Airport Fire Service won a strong score of 27.5 (out of a possible 40) for this salute for Air India’s new route from Delhi, which uses 787 equipment.

Marc: 6.8. Sydney immediately lost points for failure to deliver what we call in the FTWA world an “arch kiss”, or what our older judges call a “Roman Cross”. Suggest checking your water pressures — don’t be shy in this regard you won’t hurt the plane (even if it is a 787). Ideally, I would have liked to have seen the trucks angled a bit more to take into account the wind conditions on the day, but overall the truck alignment is good.

Paul: 6.0. I saw 12 (presumably deliberate) mistakes in the execution of Sydney’s arch. I think the chief could not make up his mind if he wanted an “Indonesian Hover”, which is catching on fast in Asia among young, talented fire fighters, or play it safe with a more classical (yawn, yawn) “Roman Cross”. The end result is that there’s far too much going on, neither style is achieved, the water jets fail to make any contact in the middle, and we just get this big, mushy, damp gap over the fuselage where there’s nothing really happening. The Austrian Rosenbauer fire truck is a great piece of equipment if all you have to do is rescue and fight fires but, to my mind, it’s a little too high tech and luxurious for these duties. My advice: Turn off the gadgets and try it blindfolded.

Ralph: 7.2. Good symmetry of arches and alignment of trucks, but let down by the fact that one is on the grass and one is on the runway (Ralph sends his scores from his vacation in Bremen, Germany).

Steve: 7.5.  A strong and well-balanced arch with a symmetrical, dual-FT configuration. Deducting points for lack of rainbow, a slight gap in the centre and half a point for the side profile angle. Although it looks great photographically, it makes judging the symmetry and balance more difficult.

Total: 27.5. This gives Sydney Airport a strong ‘no need to polish their hoses this week’ rating making it #2 (out of five) arches so far this year!

Darwin Airline (Part I) Cambridge to Amsterdam launch on 2 September 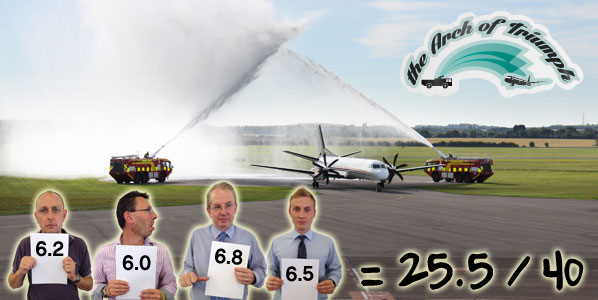 That’s a triangle: Excessive “Tobleroning” of Cambridge Airport’s FTWA for its new Amsterdam route (one of four fab new services), resulted in it losing some points.

Marc: 6.2. Oh no… Clearly the chief airport fire officer (CAFO) didn’t have his copy of Jane’s Aircraft handy when they told him it was going to be a Saab 2000 on the inaugural. It looks like the crews were expecting a taller aircraft – perhaps a Shorts 360 – which has ended up with an austere triangle or “Tobleroning” instead of an arch.

Paul: 6.0. They have invented a lot of things in Cambridge – DNA, IVF, the world’s first programmable computer. So I was very worried about expectations when I heard Cambridge Airport was going to be doing a brand new water arch. In fact this one is nowhere near as bad as I thought it was going to be. And, let’s face it, the lawn really looked like it needed a good watering. The glaring problem is that – according to the Cambridge Dictionary – an arch is “a structure, consisting of a curved top”. So it should be a ‘straight’ disqualification. But I’m totally in awe at the tenacity of both Cambridge and Darwin at getting four great air services off the ground so, just this once, I’ll ‘bend’ the rules of this new competition, just in case they were not understood. But we do want elegantly bendy arches in future!

Ralph: 6.8. More of a triangle than an arch. Great height, but it looks like there may be some wind issues.

Steve: 6.5. A good attempt by Cambridge Airport, although the wind seems to be causing some interference. Practice it in indoors perhaps?

Total: 25.5 – giving Cambridge a good ‘no need to polish their hoses this week’ rating and making it #3 (out of five) arches so far this year! 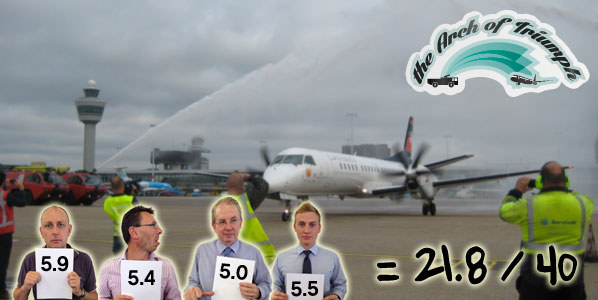 Monitor performance: Schiphol’s arch – loss of points due to weak spray and use/non-use of spare truck.

Marc: 5.9. As all pilots will tell you “Runway behind you is of no use”… And the same sentiment rings true here. Why have extra appliances in attendance and not use them?! If there are any young fire fighters out there wanting to learn from the masters, then check out this almost perfect “four-way froth fest” from Taipei Taoyuan earlier this year. Amsterdam has tried the “four-way froth fest” in the past, but got it hideously wrong with this effort from 2011. All this said, the Dutchmen have delivered a near perfect ‘arch kiss’, keeping their score respectable.

Paul: 5.4. A silver arch of triumph welcomes the arrival in Amsterdam of one of Darwin’s two new routes from Leipzig. This one typifies Schiphol’s water-saving technique – but what’s good for the environment isn’t necessarily good for art – this arch is even thinner than a Dutchman’s generosity. Having a back-up fire truck is cluttering, un-cool, and suggests worrying concerns about reliability.

Ralph: 5.0. Symmetry of arch is poor, grey cloud doesn’t help us see it (anyone ever thought of putting some dye in the water on days like this?), and having a ‘spare’ fire truck on hand does not inspire confidence.

Steve: 5.5. A nice effort from AMS for the Darwin launch, 5.5 from me, although two fire trucks are visible, the second pumping truck is cut out. Arch susceptible to wind, with one reaching the top and the other petering out.

Total: 21.8. Schiphol is beaten by Cambridge in the Darwin Airline derby, but still a good score in the ‘no need to polish their hoses this week’ range. 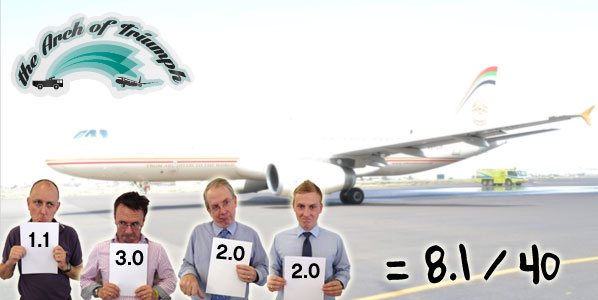 How was it for you? We’re told that Etihad’s important new four-per-week service to the Yemini capital from Abu Dhabi (the last of the MEB3 to arrive) was celebrated with a much better arch than the evidence suggests.

Marc: 1.1. This could have been the best FTWA ever. Instead it ranks alongside images of the Loch Ness Monster and other over-exposed pictures of UFOs over New Mexico – saying: “Did these things ever really exist?” A career in gardening beckons for the CAFO responsible for this nightmare. I hope the Ops Manager driving the 4×4 tasked with getting the photographer to the right spot at the right time to get the picture has not got away with this one unscathed. I guess the important thing is the fact that this was Etihad Airways’ first route to Yemen, finally joining its fellow MEB3 carriers.

Paul: 3.0. There are plenty of names for this kind of water arch, but few that can be wisely used in the public domain. Many years ago it was known as a “Clyde” in reference to Clyde Chestnut Barrow, as in “Bonnie and Clyde” (you won’t understand the reference if you are too young to have seen the great 1967 movie staring Warren Beatty and Faye Dunaway).

Ralph: 2.0. The first ever Arch of Triumph DNF? In scoring 2.0 instead of zero I factored in the importance of the route, the Sana’a Airport management’s obvious recognition of that fact in sending out the truck to salute the Etihad arrival, and my imagination of how good this arch either was, or might have been.

Steve: 2.0. To be fair it was probably a brilliant arch, judging by the (very neat) puddle.

Total: 8.1. A brutally low score in ‘sack the chief airport fire officer’ range. We’re told that there is a better photo – and that’s the point – great marketing efforts like this need great images, otherwise only the passengers on the aircraft will see their windows getting washed. Send your photos of your fabulously silver water aches to us and we’ll show the airlines of the whole world how happy your airport was to get that new route. Keep monitoring!!!!