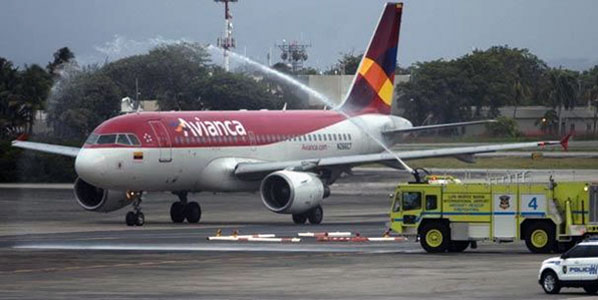 According to Innovata/Diio Mi schedule data, Colombia has 50 airports that currently offer scheduled airline services. The largest of these are Bogotá, Medellín, Cali, Cartagena and Barranquilla. As a benchmark as to how the market has evolved, when anna.aero last looked at the Colombian market back in 2010, Bogotá offered five times as much seat capacity as #2 Medellín – this variance has now dropped to less than four times. Despite the regional growth within Colombia, the capital Bogotá, which anna.aero featured Bogota El Dorado earlier this year, still offers more weekly seats than the combined total for the next 20 largest airports in the country. 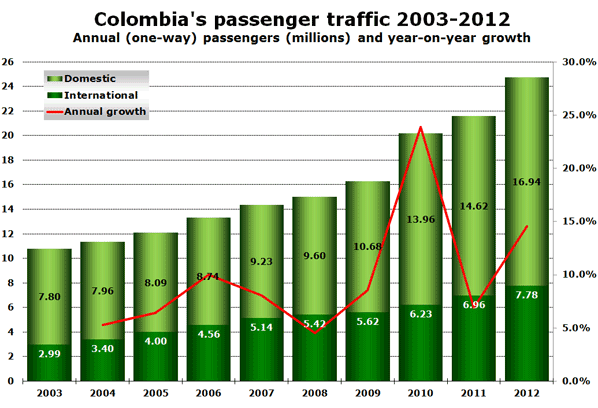 To say that Colombia is a burgeoning market is perhaps an understatement, as the country’s top 12 routes have delivered annual growth in excess of 20% (21.4%). Surprisingly, the biggest growth (+94%) has been recorded on a route not involving the capital Bogotá (which understandably dominates the top 12), but by the Medellín – Cartagena route, linking the country’s second- and fifth-largest cities. LCC VivaColombia has added 14 weekly A320 flights on this city pair, taking its weekly tally up to 46 weekly services. Despite this significant hike in capacity from its only competitor on the route, Avianca has not only grown its operation from 102 weekly flights to 150, but it has also replaced many rotations flown by its smaller A318s with A320s. 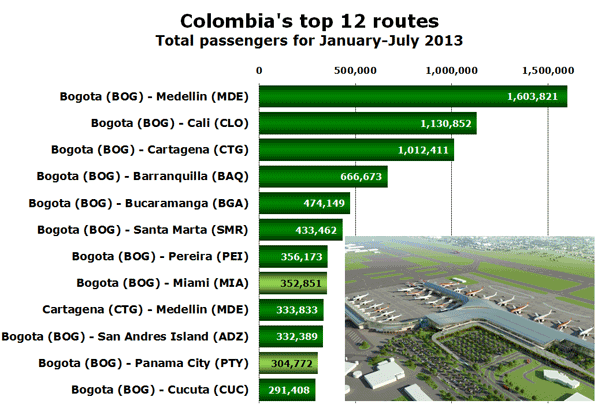 Only one of the top 12 routes has registered any sort of capacity decline in the past year — namely the Bogotá to Cucuta (-5%) route, close to the Venezuelan border. Total weekly frequencies have declined from 66 to 62, split across the three incumbents – Avianca, Copa Airlines Colombia and LAN Colombia. While the former, and the market leader, has increased its capacity by three weekly flights, and the latter has added two weekly flights up to double daily, Copa has withdrawn nine weekly rotations.

Avianca is a clear #1

Avianca, Colombia’s flag carrier and Star Alliance member, is the clear market leader in its home market (and as a result has been excluded from the chart below). Having carried over eight million annual passengers so far in 2013 (including those carried by TACA Airlines) it is over three times larger than any other airline operating in the country – that being the combined mass of #2 LATAM Airlines (LAN Colombia, Lan Peru and LAN Airlines). Despite its size, Avianca has still managed to post impressive growth figures in excess of 15% for the first seven months of 2013 (versus the same period in 2012). 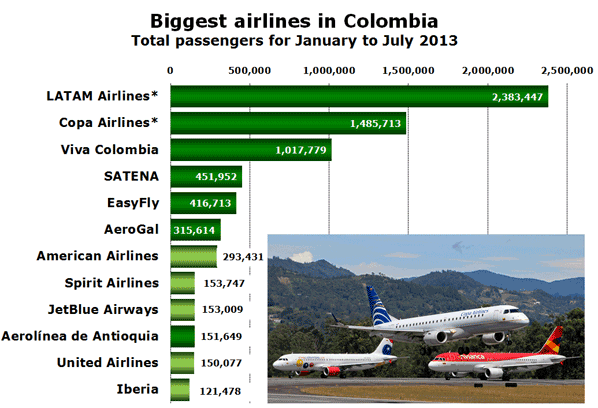 However, it is Medellín-based LCC VivaColombia, which has recorded the biggest increase in passenger numbers so far in 2013 (+920%), primarily due to the fact that it only began operations in May 2012. Iberia has recorded the biggest drop in passenger carryings (-25.1%), when comparing traffic for the first seven months of 2013 against January to July in 2012. Its weekly seat capacity on flights between Bogotá and Madrid (looking at a weekly schedule in June this year versus the same week in 2012) has been reduced by 19% – with two weekly A340-200 flights being culled to leave a daily A340-600 operation. While traffic issues for the IAG airline are still obviously present, the Colombian market seems well-placed for continued growth.