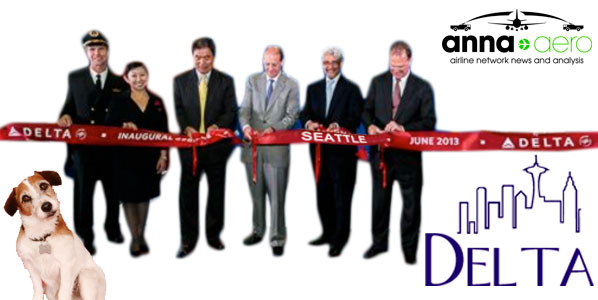 Based on passengers carried, Delta Air Lines was the world’s number one airline in 2012, helping 164.6 million people get from one place to another on one of its aircraft, an increase of 0.4% over the previous year. This includes flights operated under contract with other carriers. Capacity as measured by ASKs (Available Seat Kilometres) fell by 1.8%, but load factor improved by 1.6 percentage points to 83.7%. So far, in the first eight months of 2013, passenger numbers have fallen by 0.4%, though ASKs and load factor are both up 0.3%. This apparent anomaly can be explained by an increase in average sector length.

Analysis of weekly seat capacity at Delta’s leading airports in August shows that the top 10 airports all offered more weekly seats than in August 2012, with Seattle the biggest gainer. As anna.aero recently showed, Memphis has taken the biggest hit in capacity, down 30% in a year. 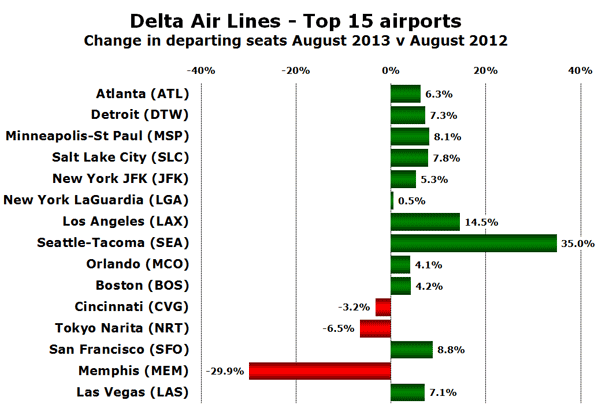 In the last 12 months Delta has launched new services from Seattle to Los Angeles (in April), and Anchorage, Las Vegas, Shanghai Pudong and Tokyo Haneda (all in June of this year). In addition, it has increased the number of daily flights from Seattle to Detroit and New York JFK. June 1: Delta launches its second route to Tokyo Haneda with daily flights from Seattle (it also operates daily from Los Angeles). Because of the cap on US-Japan flights, Delta asked the DOT to shift rights from its suspended Detroit-Haneda service. Instead, the DOT put the rights out to bid, although Delta still won over competition from Hawaiian Airlines (from Kona), American Airlines (Los Angeles) and United Airlines (San Francisco).

If sector length is taken into account, then New York JFK jumps from fifth to second in terms of importance to Delta, still well behind Atlanta. Two non-US airports (shown in light green) now enter the top 10, with Tokyo Narita seventh and Amsterdam ninth. 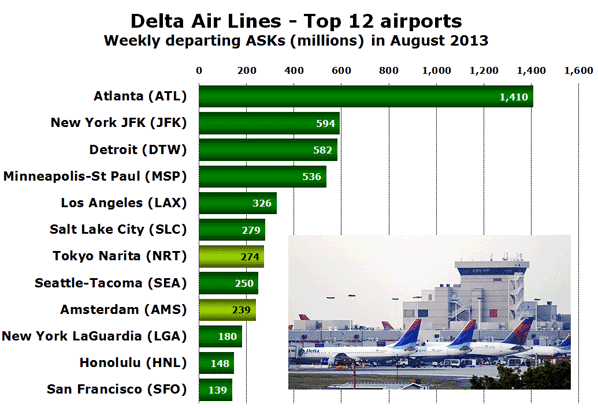 Memphis gets the blues as Delta cuts over a dozen routes

Comparing schedule data for August 2013 and August 2012 indicates that there are over 40 airport-pairs that Delta no longer serves, out of a total network of some 880 routes. The majority of these are summarised in the following table:

These dropped routes represented around 2% of all Delta flights last August, but only 1.4% of total seat capacity. To compensate for these route cuts Delta has also started over 50 new routes during the last 12 months, which are summarised by airport in the following table:

These new routes represent 1.8% of all Delta’s flights in August, 1.6% of its seat capacity, and 2.3% of its ASKs. Seattle’s growing importance in Delta’s network is further confirmed by the recent announcements of trans-oceanic services to Hong Kong, London Heathrow and Seoul Incheon, all starting next summer.