A major terminal expansion (with an integrated hotel on top) has recently been completed at Eindhoven Airport, in response to double-digit traffic growth in each of the last three years. transavia.com and Wizz Air are the second and third largest users of the airport after Ryanair, which made Eindhoven an official base in April of this year.

With over 51 million passengers last year Amsterdam Airport Schiphol dominates the Dutch airport market, but the country has several other regional airports of varying size including Eindhoven, Groningen, Maastricht and Rotterdam. The busiest of these is Eindhoven Airport which has achieved something almost unique among Western European airports by reporting double-digit growth for each of the last three years, increasing its passenger numbers in that time from 1.7 million to almost three million. To support this growth the airport recently opened a major extension to its terminal infrastructure, and a new “on-terminal” hotel. 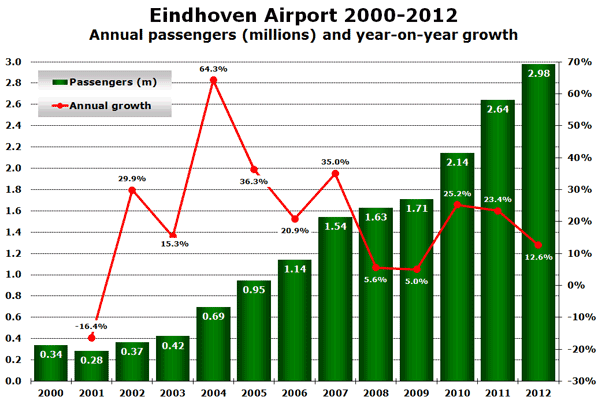 Traffic has grown year-on-year for every month in the last three-and-a-half years, and should easily exceed 3.3 million passengers this year. When 2012 data is entered into anna.aero’s SVID calculator Eindhoven scores a “good” 6.9, compared with Rotterdam at 10.8, and Maastricht at 41.2. 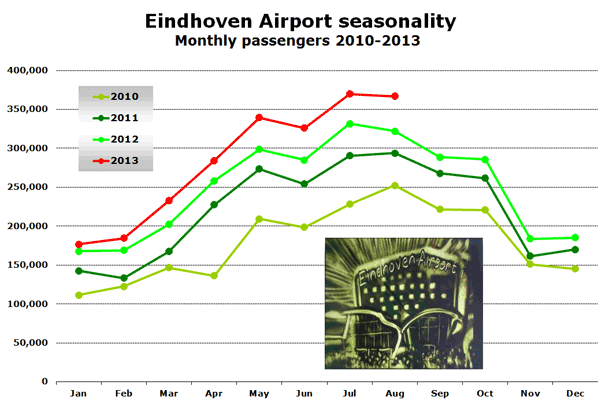 Now a Ryanair base but transavia.com growing fastest

Growth at the airport has been driven primarily by three of Europe’s major LCCs; Ryanair, transavia.com, and Wizz Air. Although Ryanair has been serving Eindhoven since 2002, when its first route from London Stansted opened, it was only this April that the airline designated Eindhoven as an official base. This summer the Irish carrier has been serving 31 destinations from its only Dutch base, though six other destinations have been served in the past and subsequently dropped – Bristol, Gdansk, Kaunas, Madrid, Oslo Rygge and Valencia. This summer Ryanair added new routes to Agadir, Bordeaux, Chania and Fez.

Though Ryanair is the biggest carrier at the airport, the decision to make it a base appears to have encouraged transavia.com (a wholly-owned subsidiary of the Air France-KLM group) to expand its network from the airport. Since the beginning of the year the Dutch carrier has launched new routes to Bologna, Copenhagen, Kos, Madrid and Naples. However, it is understood that the Copenhagen service will terminate in mid-October.

Wizz Air serves the airport from 14 of its bases in Central and Eastern Europe, and has added new routes during the last 12 months to Cluj Napoca (Romania), Debrecan (Hungary) and Skopje (Macedonia), while dropping its Prague service. In addition, a number of carriers such as Corendon Airlines and Onur Air operate seasonal charter flights to a variety of destinations in Turkey. 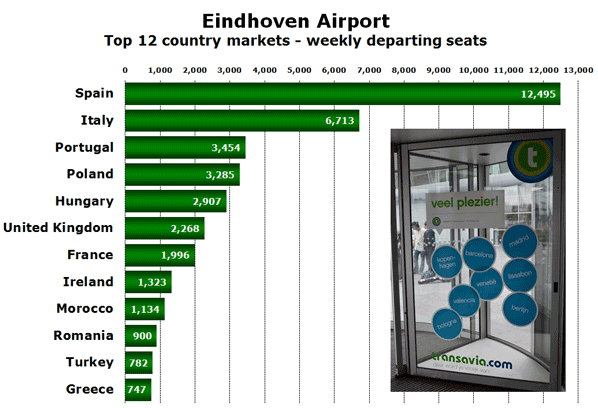 With a focus on the leisure market, it comes as no surprise that Spain is by far the leading country market during the summer, followed by Italy and Portugal. Poland and Hungary both make the top five, pushing the UK, France and Ireland down the rankings. Morocco has entered the top 12 this year thanks to Ryanair’s new routes to Agadir and Fez.

When will legacy carriers return?

The last route by a non-LCC or charter airlines was an Air France (CityJet) link to London City Airport which was cancelled at the end of March, but the airport hopes to attract full-service airlines once again in the near future. The airport is the main international gateway to the Brainport Eindhoven Region, which is the industrial high-tech heart of the Netherlands, founded on technology and design. Companies in Brainport Eindhoven Region are responsible for nearly a third of all Dutch spending on research and development, and the region is home to leading campuses like the High Tech Campus Eindhoven, the Eindhoven University of Technology Campus and the High Tech Automotive Campus Helmond. “Brainport deserves a modern airport as a gateway to Europe and as a calling card for hundreds of thousands of Europeans who visit the region via Eindhoven Airport every year. As a result of this development, we now have an airport with the right appeal for this ambitious region”, according to Joost Meijs, CEO of Eindhoven Airport.