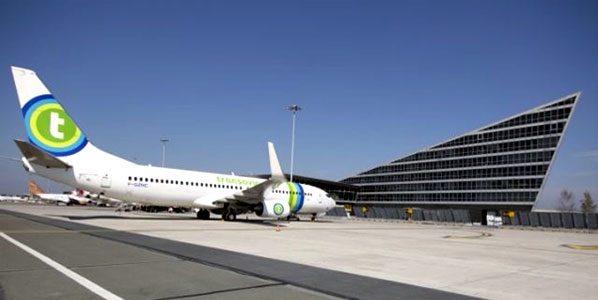 Lille Airport was France’s fastest growing airport in five months out of seven so far in 2013, with Bastia in Corsica stealing its crown in May and June, only for the northern France airport to win it back in July. transavia.com France has been a significant contributory factor in its ongoing success.

Data for the first seven months of 2013 shows that the majority of major French airports have reported passenger growth of at least 2%, but with only three achieving double-digit growth. Overall, traffic for these top 15 French airports analysed by anna.aero (does not include #12 airport Ajaccio, but does include Bastia which is #16) posted modest growth of 1.3%, increasing by over 1.1 million passengers and topping the 84 million mark. The top performer is Lille Airport, which has seen passenger numbers surge by more than 21% between January and July compared with the same period last year, thanks to the addition of at least 13 new routes from six different airlines (easyJet, HOP!, Ryanair, transavia.com France, TWIN JET and Volotea) – according to anna.aero’s new route database. 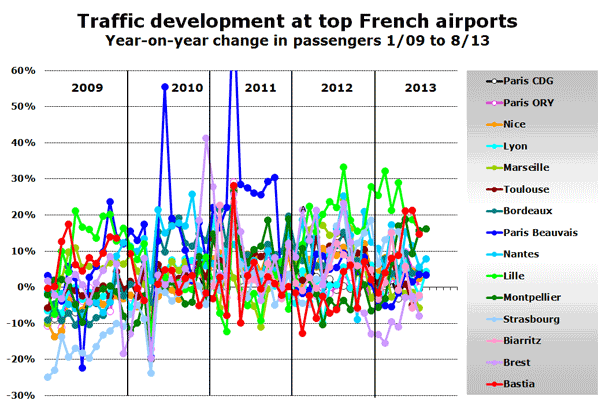 Bastia Airport in Corsica (+13.2%) and Nantes Airport (+11.2%) were the other two airports reporting double-digit growth in the first seven months of 2013 with Montpellier Airport missing out by less than 1% (it increased its numbers by 9.3%). New services to the second largest city on the French Mediterranean island include four from Volotea (Brest, Lille, Strasbourg and Toulouse), and one each from easyJet (Toulouse), HOP! (Pau) and XL Airways (Paris CDG). The Spanish LCC has also had a part to play in growth at Nantes too, launching two routes (Palermo and Florence), with Air Corsica, easyJet, Ryanair and transavia.com France all adding new services so far during 2013.

The four major airports to show a fall in passenger numbers are Brest Airport, located in north-west France and the worst offender in being down by 8.4%, while more modest declines were recorded at Marseille Airport (-1.4%) Paris Beauvais Airport (-0.4%) and Paris CDG Airport (-0.5%).

Analysis of the capacity of the top 15 domestic routes in France (using a selected week in September versus the same week in 2012) reveals that nine of them reported growth of between 0.4% and 11.6%, two went unchanged, one (Toulouse – Paris CDG) was down by more than 5% (6% to be precise), while the remaining three showed capacity reductions below this level of decline (Lyon – Paris CDG, Biarritz – Paris Orly and Marseille – Paris CDG). 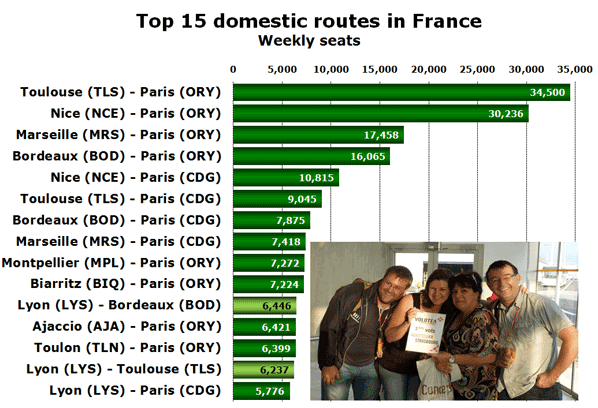 The decision by Air France in the last 12 months to start flying an all-A320 operation between Paris CDG and Nice, replacing one that had previously utilised A319s on over 50% of its flights, has resulted in the 11.6% increase witnessed on the #5 route. Again on the second fastest growing domestic route of Paris Orly to Bordeaux, the French flag carrier’s smaller A319s have been phased out of the service in favour of a more intense use of its larger A320s and A321s, but with the 42 weekly frequencies being maintained, in order to deliver the 9% annual spike in seats.