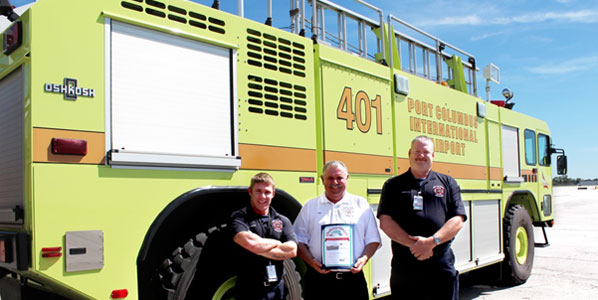 Commenting on the first ever Arch of Triumph win — “which we LOVED!!!” — was Connie Tracy, Communications Specialist, Columbus Regional Airport Authority: “Rural Metro CMH Fire Chief William Bettac (center with the certificate); flanking him are the drivers who performed the water cannon for the American Airlines 27 August inaugural flight. On the left is Anthony Salamone and on the right is Bill Ballenger. Not pictured is Captain Tony Murphy who directed the Rural Metro ARFF show that day”. 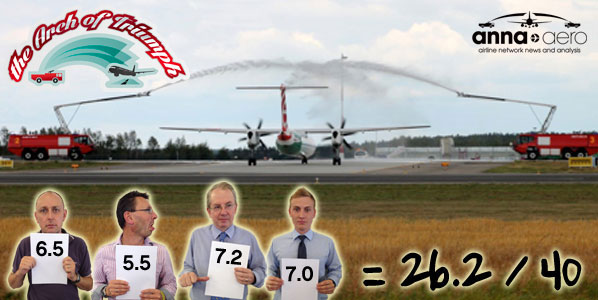 Marc: 6.5 An interesting perspective of an FTWA – which I’m afraid, for me, smacks of bad planning. New route FTWAs need to be captured head-on, in order for the whole drama to be appreciated. That said, there is a graceful symmetry to this arch which means it scores reasonably well.

Paul: 5.5 Both this contest and Formula 1 are dogged by criticisms of use of technology over human skill and this is a case in point. These fire trucks are made by Poland’s very own manufacturer, WISS. The extended monitors are amazing and the resulting “leaping dolphin” curved arches are impressive, but how much of this is craftsmanship? Of course it is hard to tell when you are looking up the wrong end of a eurolot Q400. Er, take your photos at the front please!!!

Ralph: 7.2 Nice alignment of fire truck nozzle angles. Personally quite like the rear-end view as it enables the photographer to get in the terminal as well. Note it was fire trucks “2” and “3” who performed this welcome. Why not fire truck “1”? 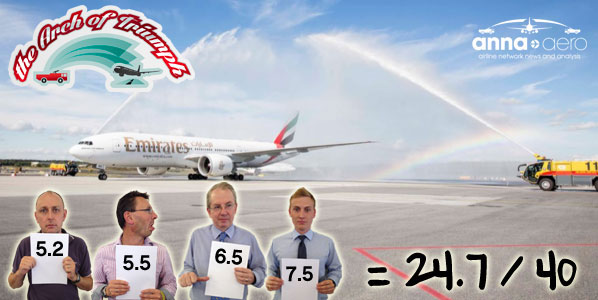 IKEA standards of minimalism: to you and me the rainbow is a delight; to tidy Swedes everywhere else this will have ruined the symmetry.

Marc: 5.2 Mamma Mia! Now we all understand that Emirates’ 777-300s are big old birds (much better than those clapped-out old A330s it normally starts routes with), but they are not that big – so the winner certainly has not taken it all with this FTWA. Gimme! Gimme! Gimme! a water arch that meets above the centre of the fuselage. One thing I have to say to the CAFO is…does your mother know (that you produced such an average FTWA)? The question is will the airport’s marketing team take a chance on him next time?

Paul: 5.5 Where is this?? What we have here is known as “Stockholm Syndrome” – the extreme Scandinavian desire for minimalism. There is no scrap of anything to tell us this is Stockholm Arlanda. Not even a name on a fire truck – just a boring number. The result is that this could be an Emirates’ arrival on Venus. But the arch is not bad.

Ralph: 6.5 A rainbow! Excellent work from Stockholm Arlanda with the sun-water-photographer alignment to get this effect. However, the wind appears to be blowing away the water before it can quite make an arch, though symmetry looks pretty good.

Steve: 7.5 A great effort by the fire department at ARN. Bonus points for the rainbow! Although slightly let down by the gap at the top. 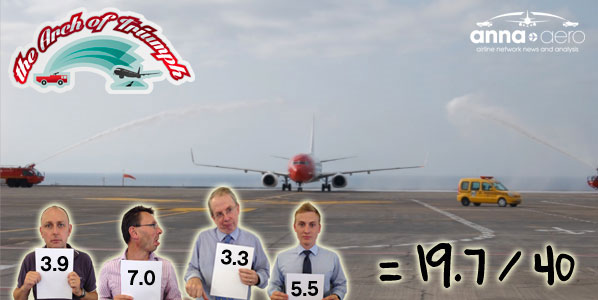 The Tenerife fire truck on the right is executing a near-perfect “Canary” – the unmistakeable form of small song bird native of these Atlantic islands.

Marc: 3.9 Classic “big boy, little boy”. But it seems that even the big boy struggled with this one. Or did someone tell the CAFO it was going to be one of the Norwegian LCC’s new 787s? By the way, was the taxi in the picture for the CAFO behind this FTWA nightmare?

Paul: 7.0 Marc Watkins is an uncultured fool. The Tenerife fire truck on the right is executing a near-perfect “Canary” by carving out the unmistakeable form of small ‘serinus canarias’ song bird which is a native of these Atlantic islands. Bravo!

Ralph: 3.3 Oh dear. Was this just a timing error by the photographer or does one of the trucks have a spurt-range issue due to the wind direction. The windsock in the background suggests it’s an atmospheric issue.

Steve: 5.5 The windsock says it all, TFS suffered from a FTWA crosswind. Points deducted for the lack of wind correction and the follow me van in the way! (Left truck is spot on).

Volaris’ Guadalajara to Merida on 4 September 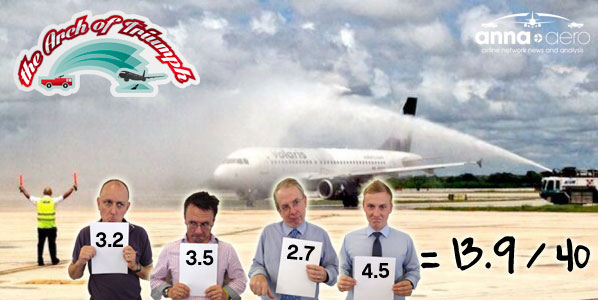 Stooooooop! The body language of the Merida marshaller says it all.

Marc: 3.2 Not so much an FTWA…more and FTWC – the last letter being for curtain. Fine water mists are perfect for tending the greens of the world’s best golf courses…but they have absolutely no place at an airport route launching ceremony. Bad form! Where is the second monitor? The CAFO responsible for this mist mess would be best placed sending his CV to St Andrews, Augusta National or the Royal Melbourne golf courses.

Paul: 3.5 The Volaris pilot at this launch was observed to have very clean ears, probably because the Merida fire-fighters had washed them out for him at the rate of 4.5 tonnes of water per minute. Rather than an arch it’s more of a shower, maybe a curtain, maybe a shower-curtain.

Ralph: 2.7 Is this a “solo” arch? Brave effort from the only visible fire truck, but the arch has definitely deteriorated into more of a mist.

Steve: 4.5 Volaris benefits from a free aircraft wash courtesy of Merida! Not an arch, more of a soak! The marshal also appears to be dancing to Village People – YMCA (70’s hit by the American disco group)! 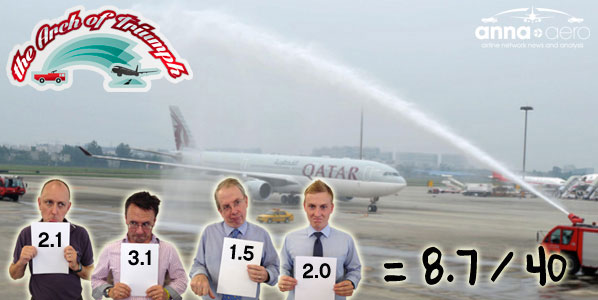 Marc: 2.1 This FTWA is reduced to a maximum score of five straight away with only one monitor pumping. Perhaps the crew in the guilty tender were just having a quick sleep…as their morning nap had been disturbed by having to leave the station to perform a valuable bit of airport marketing.

Paul: 3.1 When I saw this I assumed it was a welcome for Chengdu’s new Toyota Crown “follow me” car. I wonder if he had any water left when Qatar Airways turned up later that afternoon. All my points are awarded to the truck on the left, he’s the only one doing anything right: Nothing.

Ralph: 1.5 Blame this on the photographer. 10 seconds later and this might have been superb, but clearly the fire trucks haven’t co-ordinated their spray activations creating a bit of a mess overall. Pity the poor “follow-me” vehicle driver. I hope he’s got his windows shut!

Steve: 2.0 Premature photography lets this FTWA down. Just one of two trucks pumping, it’s more a car wash for the follow-me vehicle.

The scoring starts at 10 (a perfect score therefore being 40, with four judges awarding marks) and points are deducted accordingly if a judge feels that the water arch has been poorly executed. For example, an imbalanced water arch (known in the trade as ‘big boy, little boy’), any applicable violations (such as fire truck misalignment) or a failure to take into consideration conditions on the day (perhaps resulting ‘wind-induced arch drift’, to use the now-accepted industry term) will result in a loss of points. The four individual judge’s scores are then added together to form the final score. Fire truck water arch fans will soon see ‘sack the chief airport fire officer’ scores in the 0-10 range; ‘urgent visit to the fire training ground’ in 10-20; ‘no need to polish their hoses this week’ in 20-30; and ‘buy the fire fighters another pool table for the station’ in the 30-40 range.

So, the challenge to airport PR and marketing teams is this: From now on the quality of your fire truck water arches are being benchmarked – so make sure you brief the fire chief on the importance of getting it right!