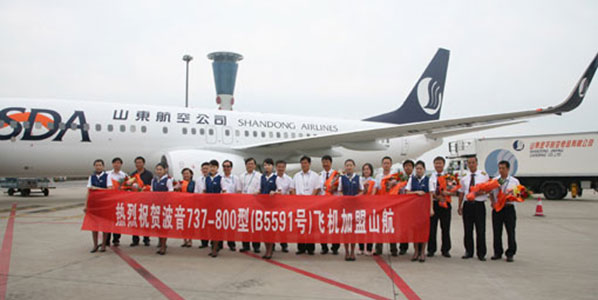 Shandong Airlines’ newest fleet addition has been the delivery of its latest 737-800, picking up the keys from Boeing on 30 August. The arrival at its home base, Jinan Airport, brings the airline’s total fleet size to 74 aircraft, including 58 737-800s, six 737-300s, three 737-700s and seven CRJ series aircraft (Source: planespotters.net).

Shandong Airlines, nicknamed SDA, is a Chinese airline with its headquarters based in the Shandong Airlines Centre in Jinan, Shandong, China. The carrier was founded in 1994 and is now a daughter company of Air China. It operates mainly domestic trunk routes from Jinan, Qingdao and Yantai to major cities in China. The domestic market accounts for 98.9% of SDA’s weekly seats, with overall capacity up 14.2% in the last 12 months. The carrier serves three countries (Taiwan, South Korea and Thailand) beyond its domestic services within mainland China.

The top 12 routes in Shandong Airlines’ network are relatively stable, with only four of last year’s services not included in the 2013 top dozen (Hangzhou-Xiamen; Shanghai Hongqiao-Jinan; Jinan-Xi’an; and Shanghai Hongqiao–Yantai). The four routes which have entered the top 12 this year are highlighted in the chart below. Shanghai Hongqiao to Qingdao remains the top route served by the Chinese carrier, growing by 20.6% in terms of weekly seats versus the same week last year. 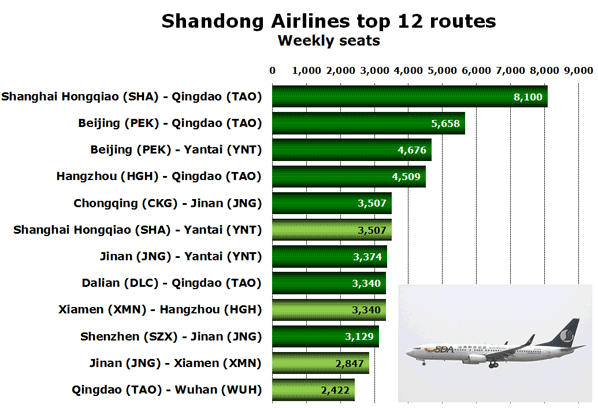 The carrier has two main operating bases at Qingdao and Jinan. The latter is claimed to be the airline’s primary hub, but interestingly the capital of Shandong province in eastern China is second in terms of capacity to Qingdao (15.2%), with a weekly seat share of 12.4%. Xiamen, on China’s south-east coast is in third, with a 6.6% capacity share.

The current network of services from Shandong boasts 59 destinations on the route map, up from 56 a year ago. Added in the last 12 months have been seven new points; Baotou, Chiang Mai (in Thailand), Haikou, Hailar, Hualien, Jiujiang, and Linyi. Four airports have been dropped from its network; Osaka Kansai, Ganzhou, Luoyang, and Tokyo Narita.