The weather wasn't great when anna.aero's intrepid Chief Analyst Ralph Anker found himself at Sydney Airport, Nova Scotia last Saturday. But he was in time to see one of Air Canada Express' six daily flights to Halifax get ready for its 300-kilometre flight. 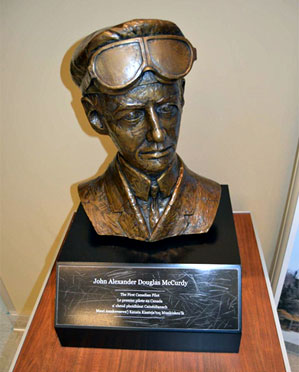 John Alexander "JA" Douglas McCurdy, born in Beddeck, Nova Scotia, was the first Canadian to be issued a pilot's licence (in 1910), and set many aviation records in Canada and North America. Sydney Airport was re-named in his honour in 2009. A descendent of his, Jane McCurdy, now works in the network planning department of WestJet.

There are several place names that can refer to two different cities in different countries, such as London (UK and Canada) and Santiago (Chile and Spain). Another is Sydney. The name is normally associated with Australia’s busiest airport, but is also a town in Nova Scotia, Canada with a population of just over 30,000 people. Its local airport is known as JA Douglas McCurdy Sydney Airport, and speaking to anna.aero’s Chief Analyst Ralph Anker during the Altitudes East event in Halifax earlier this week, airport CEO Helen MacInnis revealed that the airport handled 154,000 passengers in 2012, and that year-to-date (to August) traffic was up a further 12%.

Air Canada is the dominant carrier at the airport operating between five and six daily flights to Halifax using 37-seat DHC-8-100s operated by Jazz on behalf of Air Canada Express. In addition it also operates daily flights for much of the year to Toronto using CRJ 200s. Competition on this route is provided by WestJet, which operate daily flights for most of the summer season using its 119-seat 737-600s.