easyJet gets ready to select base #23 – Hamburg Airport 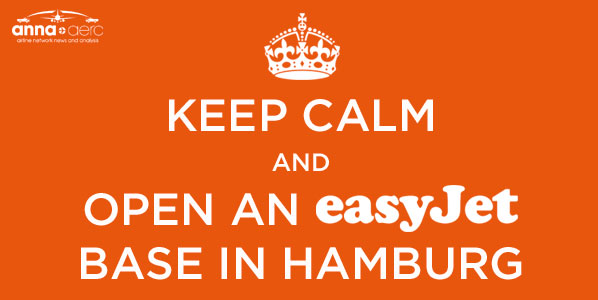 anna.aero 'discovered' the new Hamburg Airport base — #23 — when examining the S14 schedules. We think it will have a shortened list of the "power five" routes — the routes that it thinks every base should have — and maybe services to Antalya and even Moscow.

easyJet is poised to announce its 23rd European base (20 bases for easyJet, plus Basel and Geneva for easyJet Switzerland), and its second in Germany* (after Berlin Schönefeld) – none other than Hamburg – predicts anna.aero. If proven correct, this will become the LCC’s first base announcement since the opening of London Southend last April. *(Of course, easyJet did have a base at Dortmund Airport between 2004 and 2008, peaking at four based units, but has since dwindled to become just a spoke destination, served only 13 times weekly from London Luton).

When entering a new market, LCCs tend to go for routes which are the ‘low-hanging fruit’ – namely those where there is plenty of market to steal from existing operators. Looking at Hamburg’s top 12 routes in terms of weekly seats (which excludes long-haul services to Dubai), many of the ‘low-hanging fruit’ routes, including the top three, are domestic. These city pairs are dominated by airberlin and Lufthansa, and when consulting easyJet’s 36-route network of services from its only other German base — Berlin Schönefeld — not one of them is domestic. On that basis, anna.aero predicts that easyJet will therefore not enter the domestic market from Hamburg, ruling out five of the top 12 (Frankfurt, Munich, Düsseldorf, Stuttgart and Cologne). 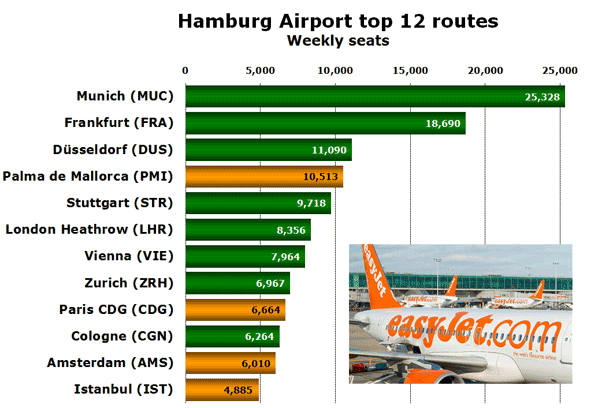 As easyJet has four London bases already (Gatwick, Luton, Stansted and Southend) it is unlikely that Heathrow will be started from a Hamburg base. The LCC does serve Zurich and Vienna, but as they are airports #65 and #89 in terms of weekly seats (from 131 served airports), they are therefore unlikely to feature when there are more prominent opportunities (neither are served from Berlin Schönefeld). The London Luton-based airline currently does not fly to Istanbul Atatürk, but it does fly to Istanbul Sabiha Gökçen, so the former stays on list of potential routes, along with Palma de Mallorca, Paris CDG and Amsterdam, from Hamburg’s top 12 routes, as those being earmarked by anna.aero for the prospective easyJet operation.

Only three of the ‘power five’

In route development meetings, easyJet often refers to the ‘power five’ routes — Malaga, Barcelona, Palma de Mallorca, Alicante and Faro — as the key routes that every base should have operations to. While the former three routes are likely to be added to the new Hamburg’s base, services to Alicante and Faro are less popular in Germany (neither are served from Berlin Schönefeld) and have therefore been rejected. 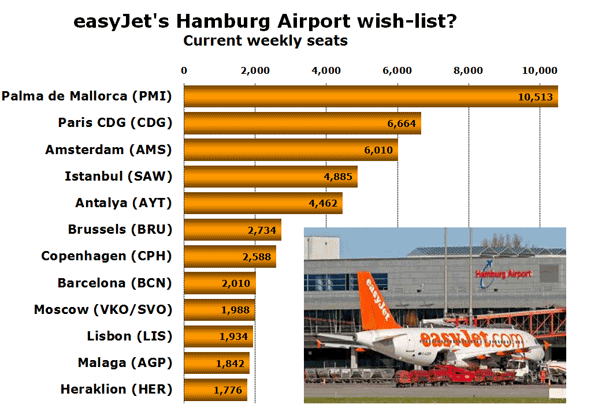 Joining up the dots to existing bases like Lisbon, (other bases outside of this top dozen which may be on easyJet’s route wish list might be Milan Malpensa and Geneva) along with services to important network spoke points of Brussels, Copenhagen and Heraklion (all again served from Berlin Schönefeld) would appear to be ‘easy’ decisions to make. More risky would be the suggested Antalya* service, which does feature from three bases already (Basel, London Gatwick and Manchester), but given the size of the potential market and the cultural ties between the two nations it would seem a reasonable suggestion. Rounding out the top dozen would be a link to Moscow*, presumably to Domodedovo as easyJet’s preferred entry point rather than the existing Vnukovo (operated six times weekly by Lufthansa) and Sheremetyevo (daily, Aeroflot) services. *(presumes that easyJet would be gain the necessary permissions to fly these routes).

No base smoke without route fire

This ‘Leak of the Week’ came about when one of our eagle-eyed data elves noticed something curious in the recently released S14 schedules of our orange friends based over at London Luton Airport — an early morning departure from Hamburg to London Gatwick at 0700. Now this might be just a night-stopping aircraft to take advantage of the higher yields that the airline might be attracting from the German-end of the route. However, such a decision to overnight crew away from base is still relatively uncommon in the world of LCCs, but of course easyJet’s business model is looking more like those it initially strove to differentiate itself from – the so-called legacy carriers.

Indeed, the carrier is adding a daily night-stop to its existing Amsterdam – London Gatwick operation for S14. However, the decision to introduce this type of rotation is far more rational, given the fact that the resulting 43 times weekly operation boasts a significantly more congested schedule than the 13 times weekly Hamburg – London Gatwick city pair. Perhaps more convincingly, when looking at the airline’s Hamburg schedules, the aircraft flying this rotation back into Germany would then sit on the ground all day before operating the evening London Gatwick service – an example of very poor aircraft utilisation, unless a base was being mooted. easyJet launched a four times weekly link from Edinburgh to Hamburg in March - could the German airport be 'upgraded' to a base, rather than just a spoke, in early-2014?

According to Innovata historic schedule data for the last 10 years, easyJet has maintained a constant presence at Hamburg since December 2005, when it launched services (no doubt targeting Airbus corporate traffic) from Bristol in the UK (although the route is no longer served). Links to the UK feature highly in the LCC’s existing network from Hamburg, being up until these plans have been revealed, just a spoke from six of the airline’s current 22 hubs. With a possible S14 base launch from 30 March, an announcement could be imminent — perhaps at World Routes in Las Vegas — unless easyJet’s network planning team lose their shirts on the craps tables of course!

easyJet HAM Leak of the Week