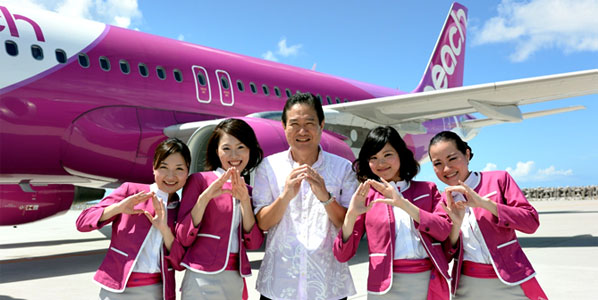 Okinawa Naha Airport now benefits from additional services to Ishigaki, Japan with Peach Aviation. The low-cost carrier launched its daily operation on 13 September and competes with; All Nippon Airways (56 weekly flights), Japan Transocean Air (63) and Skymark Airlines (28). The airport’s growth is stable, despite a slight drop in the number of annual seats in 2011. Growth is the trend for weekly flights and weekly seats, although the number of airlines and destinations remains the same.

Okinawa’s Naha Airport is a second tier airport located just four kilometres from the capital city of the Japanese Prefecture, Naha. The city is situated on southern part of Okinawa Island, the largest of Okinawa Prefecture, and is on the coast of the East China Sea. The island’s population (last recorded in 2009) is almost 1.4 million, and the capital city accounted for approximately 320,000 of that figure. The civilian operation at Naha has shared the airfield’s facilities with the Japanese Air Self-Defence Force since 1954, when the airfield became joint military and civilian. 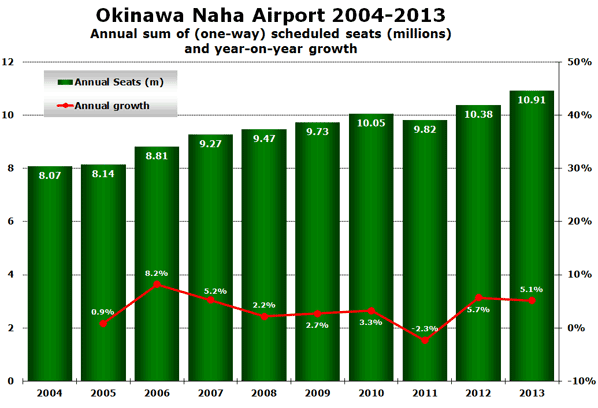 Without a readily available source for annual passenger data, we have decided to look instead at how Naha airport has performed using the total number of annual seats. Since 2004, there has been a definite growth in the number of seats, a trend which has continued with just the one exception in 2011 (when the whole of Japan was impacted by the Tohoku earthquake and ensuing tsunami), whereby there is visibly a drop of -2.3%.

Flights up 2.1% with Peach and Jetstar Japan driving growth 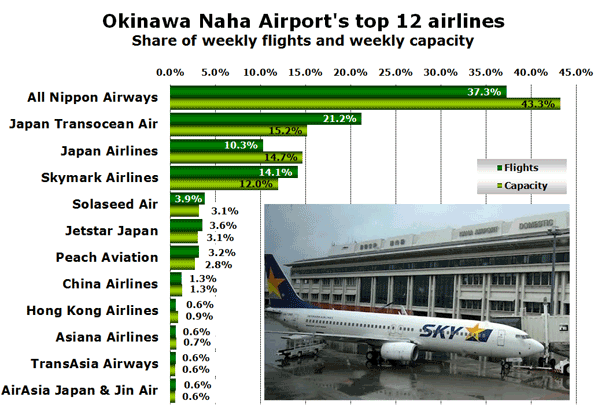 On the other hand, Japan Transocean Air and Japan Airlines have made the biggest reductions in services, compared with the same week last year, each with 21 less weekly flights. Japan Transocean has reduced its share of weekly flights at Naha by 2.4% with the removal of its Tokyo Haneda service, leaving eight remaining Japanese destinations in the carrier’s network; Ishigaki, Miyako, Fukuoka, Nagoya Chubu, Osaka Kansai, Kumejima, Komatsu and Okayama. Japan Airlines has reduced its share of weekly flights by 2.2%, dropping its twice-daily operation to Osaka Kansai, leaving its three remaining domestic routes; Tokyo Haneda, Osaka Itami, and Tokyo Narita. Mandarin Airlines has quadrupled its number of weekly flights by doubling its twice-weekly operation to Taichung in Taiwan, as well as adding four weekly services to Taipei Taoyuan. Despite such a significant increase for the airline, it only represents a share increase of 0.5% at Naha.

Okinawa’s Naha airport is served by 17 airlines according to data for the week, 24-30 September 2013 (source Innovata/Diio Mi). This number has remained unchanged compared with the same week last year. However, since then, the total number of weekly seats offered at Naha is up by 13.7%. The most noticeable growth has come from Skymark Airlines, which has recorded an increased weekly seats share of 2.7% (+8,714 seats). On the other hand, Japan Transocean Air made the largest reduction, its share down 3.7% on the same week 12 months ago (-3,150 seats). United Airlines has withdrawn its only, twice-weekly, service between Naha and Guam, US territory in the western Pacific Ocean. Jin Air, on the other hand, launched services to Naha in December 2012 with daily flights from Seoul’s Incheon International Airport. Jin Air, the low-cost subsidiary of Korean Air, shares 12th place with AirAsia Japan as both carriers offer 1,260 weekly seats (0.55% weekly seat share). Hong Kong Airlines now operates daily flights to Hong Kong International Airport, a service which 12 months ago was in the hands of Hong Kong Express Airways. Both carriers are daughter airlines of the Chinese carrier, Hainan Airlines; the transfer of the operation has resulted in 100 more weekly seats than last year (-0.04% share of weekly seats).

Naha serves a total of 29 destinations, a number which has remained unchanged since the same week last year, however, there have been some changes. These include the loss United’s service to Guam and the addition of daily flights by All Nippon Airways (ANA) to Sapporo, the only new Japanese destination since last year. When comparing data for 24-30 September 2013 with the same week last year, 11 of the 12 destinations in the chart have remained the same. The #1 spot, with 69,918 weekly seats, remains Tokyo Haneda, which also recorded the largest net increase of weekly seats, an additional 5,880 (+9.18%), although its share is down 1.3%. The destination is now served by three airlines, ANA, Japan Airlines and Skymark, one less than last year. Japan Transocean had offered 2,100 weekly seats to the Japanese capital last year; however it no longer operates the service. Fukuoka is in second place for the second year running. The destination has seen a reduction of 2,313 weekly seats, giving it a weekly seat share of 10.1%. 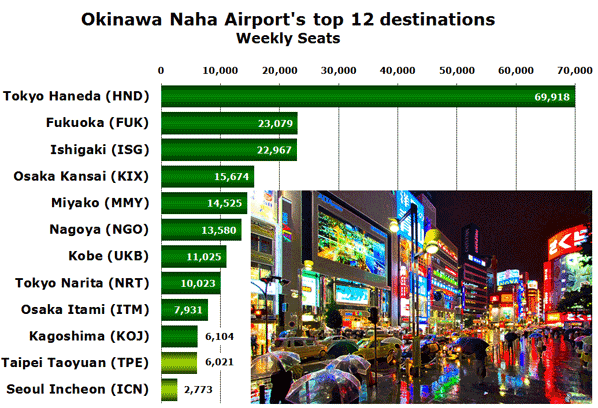 94.2% of the weekly seats from Naha are to the 23 Japanese destinations served. The top 12 destinations shown above represent 89.3% of all weekly seats from Naha, just 0.02% less than the same week last year. Two of the top dozen (highlighted in the chart) are not domestic routes. One of these is the South Korean capital Seoul, which has made it into the chart, climbing from 19th, to a more respectable 12th, after the addition of Jin Air’s daily services on the route which was already served by Asiana Airlines, also daily. The South Korean destination has replaced Hong Kong in this year’s top dozen. Tokyo Narita has been replaced in seventh place, switching with Kobe (+1.5% weekly seats share); the biggest weekly seats share growth out of the top destinations at Naha. Outside of the airport’s domestic network of 23 Japanese destinations, Naha serves six international destinations across four countries; China, Hong Kong, South Korea and Taiwan.

Okinawa’s Naha Airport is in a very stable situation with steady growth across both flights and seats. The ratio of domestic flights to international is very unbalanced, but it is working for Naha. Perhaps international traffic may one day be the key to future growth at Naha, but with the loss of United, is it a sign that the international market is limited?