TWIN JET’s dynamic 12 months; weekly flights up 13.7%; plus new routes such as Le Havre to Lyon 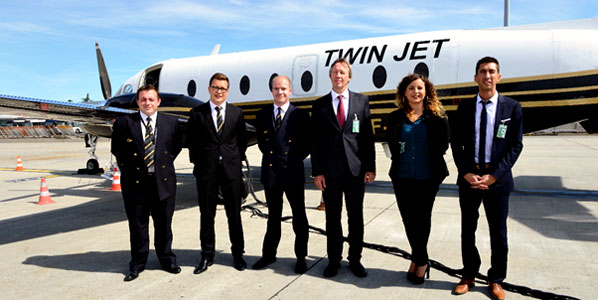 One of two recent route launches from the French regional airline TWIN JET was inaugurated on 9 September with 16 weekly Beech 1900-operated flights from Toulouse to Milan Malpensa. The most recent addition, launched on 16 September, is a new operation between Lyon and Le Havre, offered twice-daily on weekdays and also uses the airline’s single-type fleet of 19-seat Beech 1900s.

The French regional carrier TWIN JET commenced scheduled operations in March 2002 after its very first flight in May 2001, and operates a single fleet of Beech 1900s (19 seats). Since its start-up, the carrier appears to have survived the tough economical issues faced globally, in Europe and more specifically in the French market. The carrier also offers business and charter services to compliment its growing and changing scheduled network. We find out what is changing for the airline, which is headquartered in Aix en Provence, in southern France.

Paris Orly in decline, while Toulouse leaps ahead

Of the 14 destinations served by TWIN JET across its French domestic and European regional network, the carrier focuses its operations at Marseille Provence Airport (MRS), closely followed by Toulouse Blagnac Airport (TLS) and Paris Orly (ORY). The top three airports account for 41.7% of weekly flights in the airline’s network. From the top three, only Toulouse will have grown when considering September 2013 schedules compared to those operated in 2012. While #1 Marseille remains the same with no difference in the number of flights, last year’s #2, Paris Orly, has had its overall share reduced by 2.6%, putting it in third place this year. Declines at Paris Orly, combined with growth at Toulouse, will see the latter airport jump from sixth to second in terms of weekly flights share. These cuts are still not as drastic as those being felt at Limoges Airport, which is facing the worst cull of the top 12, with 28% less flights and seats year-on-year (NB – As a result of TWIN JET’s single aircraft fleet structure, the data given for either the percentage share of frequency or share of capacity is in fact the same figure). 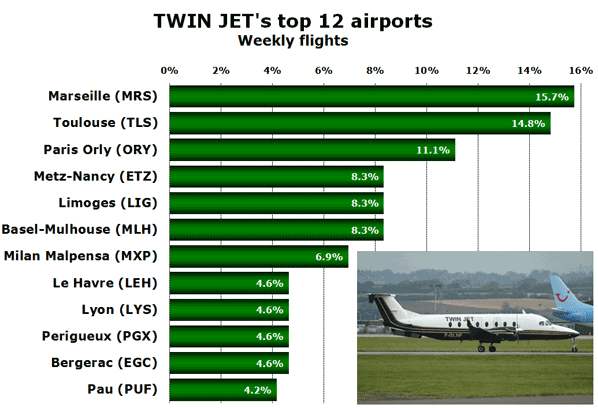 The year-on-year data for 24-30 September 2013 versus the same week in 2012 looks strong – weekly flights and weekly capacity are up over 13.7%. The airline has chopped and changed three airports since the same week last year. TWIN JET no longer serves three French destinations, Montpellier, Strasbourg and Paris CDG. Instead, passengers are now offered Le Havre, Lyon and Bergerac.

The Flying Blue partner airline does offer two of its 14 destinations outside of France; to Geneva in Switzerland and Milan Malpensa in Italy. However, TWIN JET is predominantly a domestic carrier, with 90.3% of weekly seats in September 2013 originating in France. This figure has decreased over the last year, falling 6% from 96.3%, due to the start-up of last week’s new route from Toulouse to Milan Malpensa.

The top 12 routes within TWIN JET’s network account for 97.3% of weekly flights. The remaining 2.7% is divided between two routes; Marseille – Limoges and Geneva – Milan Malpensa with shares of 1.8% and 0.9% respectively. New routes in the top dozen for 2013 include; Metz-Nancy – Marseille, as well as Basel-Mulhouse – Marseille. The top spot, 12 months ago, belonged solely to Limoges – Paris Orly with 304 weekly seats. However, one of the airline’s latest network additions, Milan Malpensa – Toulouse, has immediately made an impact to share the #1 spot. Both routes offer 266 weekly seats each, commanding nearly 25% of the regional carrier’s weekly capacity. 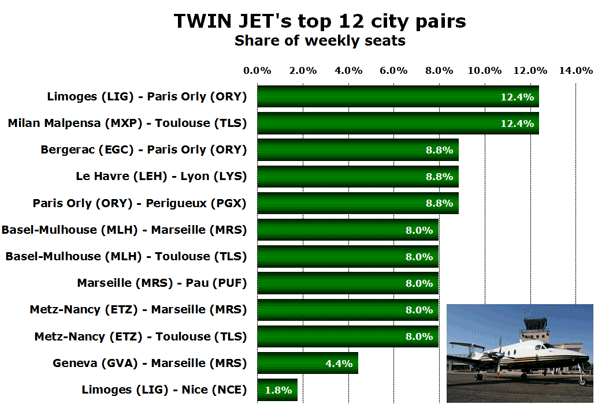 Between 24-30 September 2013, the top 12 city pairs that will be served by TWIN JET represent 304 more weekly seats than the same week last year. Most noticeably, the #2 city pair last year, Paris Orly – Perigueux, has lost its independent position and is now in joint third with Bergerac – Paris Orly and the latest network addition; Le Havre – Lyon. Geneva – Marseille is down from ninth to 11th, despite no actual change in the number of seats year-on-year for the route.  At the bottom of the pile is the Limoges – Paris Orly route, a route which has remained in 12th place with 38 weekly seats, a figure which has stayed unchanged.