Two new routes launched in as many days from Vilnius, Lithuania, as Air Lituanica puts its latest fleet addition to work. Celebrating the new 904-kilometre, four weekly, schedule to Prague is; Jozef Sinčák, Vice-Chairman of the Board of Directors and Senior Executive Director of the Business and Corporate Services Division at Prague Airport; Simonas Bartkus, CCO of Air Lituanica; Sandra Meškauskaitė, Communication Manager for Air Lituanica; and Aurimas Taurantas, The Lithuanian Ambassador in the Czech Republic. 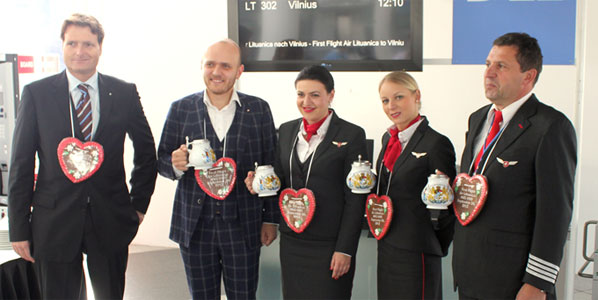 Air Lituanica’s CCO, Simonas Bartkus, celebrated the launch of the new Lithuanian carrier’s fifth destination at Munich airport, on 21 September. Also marking the important day was Alexander Schroll, the Director of Traffic Development at Munich Airport; and cabin crew from the airline's second Embraer E175. The new airframe is used to operate the thrice-weekly, 1,170-kilometre sector between the two cities without competition.