On 30 July Allegiant Air celebrated its five millionth passenger (Marni Allen of Oro Valley) at its third biggest base of Phoenix/Mesa Gateway Airport in Arizona. The airline started operations there just six years ago, and now handles around 1.5 million passengers per annum at the airport. Allegiant's Director of Marketing Brian Davis was on hand to say a few words (along with other dignitaries) at the event in the airport's arrival area.

Las Vegas-based Allegiant Air ranks as the 13th largest carrier in the US domestic market, accounting for around 0.8% of domestic seat capacity, according to anna.aero’s analysis of Innovata / Diio Mi schedule data for August 2013. Last year, the carrier transported just over 6.5 million passengers on its scheduled services, an increase of 14.1% on 2011. The average load factor, a highly impressive 89.4% across the year, was actually down 2.3 percentage points compared with the previous year. However, Allegiant’s biggest achievement is its almost unrivalled profitability. According to Airline Weekly, in the second quarter of 2013 the airline achieved an operating margin of 17%, beaten only by another US low-cost carrier, Spirit Airways. And all of this is achieved with a fleet of mostly vintage MD-80 series aircraft.

Scheduled passenger numbers up 9% so far in 2013

So far passenger numbers at Allegiant are up a further 9.1% in the first eight months of 2013, which suggests the carrier is on track to pass the seven million mark by the end of the year. One of the airline’s key features is its determination to match demand with supply on its leisure-based network. As a result the airline’s seasonality profile, though reasonably consistent from year to year, contains a number of peaks and troughs. 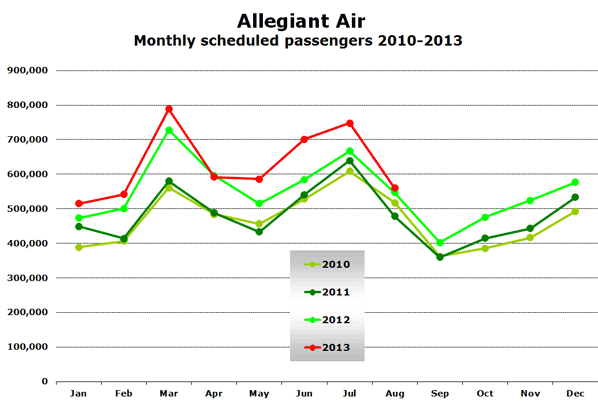 92% of flights on just four days of the week

What makes Allegiant possibly unique among major airlines, is its focus on operating only on those days of the week when it believes it can make most money. With a route network aimed at taking people from relatively remote regions of the US to some of the country’s leading leisure markets (Arizona, California, Florida, Las Vegas), based on schedule data for August (one of the airline’s peak months), 92% of all flights operate on just four days of the week; Mondays, Thursdays, Fridays and Sundays.

This focus on the leisure market also means that the airline’s average weekly frequency across its network is just 2.4 flights per week, another statistic that is unrivalled by any other major airline. In August, just two routes were served with at least daily frequency; Las Vegas to Bellingham (19 weekly flights), and Las Vegas to Stockton (with nine weekly flights).

Allegiant currently flies to some 80 airports in the US, including Honolulu and Maui in Hawaii. Las Vegas is by some distance the airline’s busiest airport, with 137 departures per week, spread across 44 routes. The airline’s main bases in Florida (Orlando Sanford) and Arizona (Phoenix/Mesa) rank a relatively distant second and third. 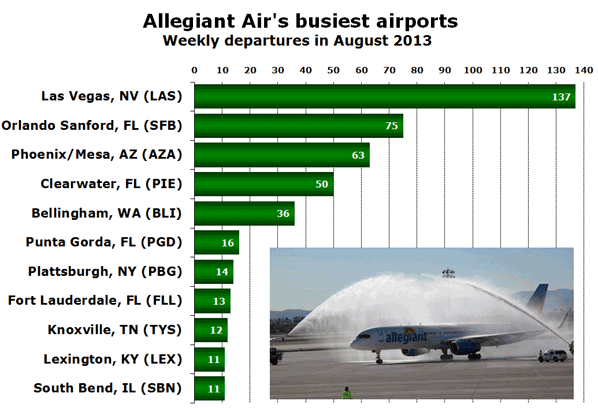 Services to 15 new airports in the last 12 months

During the last 12 months, Allegiant has started some 20 new routes, out of a total network (in August) of around 160 routes. These new routes included services to 15 airports not served by the airline in the previous year. At four of these airports (Columbus Rickenbacker, Ogden, Provo and St Cloud), Allegiant is the only provider of scheduled services. The carrier has launched a twice-weekly service between Provo and Los Angeles just last week.

In addition, between now and the end of 2013, Allegiant will launch services from a further 11 new airports across the US. The airline has also sought permission to launch its first international services next June, from Las Vegas to Hermosillo and San Jose del Cabo in Mexico. At Concord and Portsmouth, Allegiant will be the sole provider of scheduled services.

By operating from so many relatively small and obscure US airports, the airline faces, not surprisingly very little direct competition on the vast majority of its routes. According to the airline’s own analysis, on only 21 of its routes does it face competition, with Southwest Airlines overlapping on 12 routes, and no other carrier competing on more than three.

For many years Allegiant operated just a single aircraft type; McDonnell Douglas MD-80 series aircraft. In the last couple of years, 51 of the airline’s 52 MD-80s have been re-configured to a higher-density 166-seat layout. The launch of services to Hawaii in 2012 required the airline to find a new aircraft type, and it selected 757s for these oceanic routes. In addition, the airline now operates three A319s which it has acquired from easyJet, and during the fourth quarter of this year the airline expects to put into service the first seven (of nine) A320s that it is acquiring from Iberia. This will bring its fleet up to 68 aircraft by the end of 2013. To find out how big Allegiant is in terms of operations in its home-state of Nevada – read our profile on the Silver State.