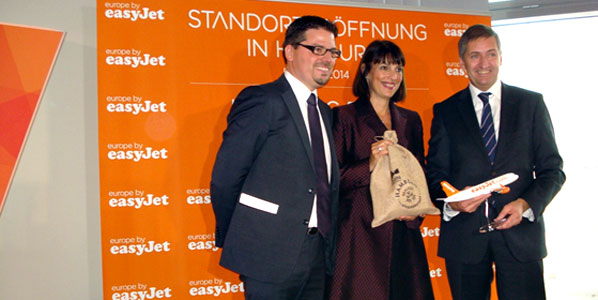 Pictured at the announcement that Hamburg will become easyJet’s 23rd base in S14, and second in Germany (along with Berlin Schönefeld), is (from left to right): Thomas Haagensen, Country Director Germany easyJet; Carolyn McCall, CEO easyJet, and; Michael Eggenschwiler, CEO Hamburg Airport.

What the eagle-eyed data elves of anna.aero noticed and predicted came officially true last Wednesday, when easyJet’s CEO Carolyn McCall proclaimed the opening of the airline’s 23rd base at Hamburg Airport, ready for S14. The LCC, which has not announced a base since it opened London Southend Airport in S12, stated that it will commence 15 new destinations from Hamburg with three based aircraft, adding to the carrier’s existing six routes out of the German airport (Basel, Edinburgh, London Gatwick, London Luton, Manchester and Rome Fiumicino).

However, at the press conference McCall gave no clear signals which routes have been selected — take a look at last week’s story to see where anna.aero thinks the airline may fly. The selected routes will be officially announced on 31 October in Hamburg. But she indicated that the initial network will be a mix of business and leisure destinations, with some double-dailies to please the business travel community. She also expects that the share of business travellers will be over 20% of traffic, helping to strengthen the anticipated average yield per seat. The new base will mean that easyJet will double its passenger throughput out of Hamburg to one million per year.

Commenting on the historic deal, Hamburg Airport CEO Michael Eggenschwiler said: “After eight years of easyJet services out of Hamburg, we are extremely happy and excited that the carrier finally selected [in a dramatic pitch against other European airports] the dynamic and powerful city in the north of Germany, as its 23rd base”.

SXF base gets another unit too

During the same press conference McCall also confirmed that it will add an eighth aircraft to its Berlin Schönefeld base next summer too. It will mean 130,000 more passengers on top of the four million passengers easyJet has carried over the last 12 months (a 9.5% increase on the previous year) at the airport. The extra aircraft will allow the LCC to increase frequencies on popular business and leisure routes, offering passengers up to 635 flights per week from the German capital in S14. Of course, it’s possible that by then all Berlin flights will be operating from Berlin Brandenburg Airport.

Big thanks to ‘our man’ on the ground in Hamburg – Andreas W. Schulz, Consultant Aviation and Tourism – www.aviatourcon.de 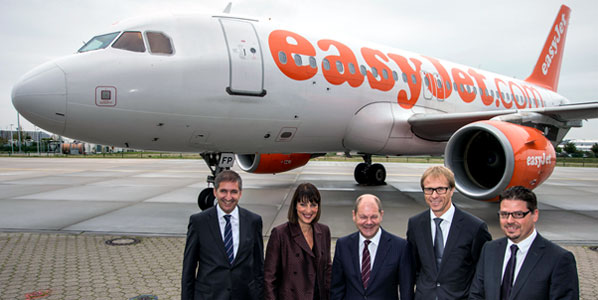 Another recently announced new route, this time by Emirates, is its latest addition to its growing US network — namely daily B777-200LR operations from its Dubai hub to Boston. Of course, being anna.aero readers you all knew about this new route back in January, when we told you about the MEB3 carrier’s route network expansion plans – which also included a new route to Stockholm Arlanda, subsequently launched on 4 September. So for the latest route development intelligence, news and analysis – just read anna.aero!

easyJet easyJet base HAM New base