They may not be the biggest airline in Las Vegas (they rank 11th, though passenger numbers grew by 26% in 2012), but Virgin America certainly knows how to celebrate a new route. It launched three daily flights to Los Angeles back in mid-April, but faces stiff competition from five other carriers on the route, including Southwest Airlines, the airport's biggest airline with almost 40% of traffic.

The US state of Nevada covers almost 300,000 square kilometres (around the same size as Italy), but has a total population of less than three million, around 70% of which are located in and around the state’s biggest city (but not capital), Las Vegas. A further 420,000 people live in the area in and around Reno, which is 550 kilometres north-west of Las Vegas, close to Lake Tahoe, which straddles the border between Nevada and California.

Las Vegas is served by McCarran International Airport (named after the former Nevada Senator Pat McCarran), a four runway facility which last year handled 41.7 million passengers, making it the eighth busiest airport in the US, and 23rd busiest in the world in 2012, down from 20th in 2011, despite a small increase in passenger numbers. Las Vegas’ global ranking peaked at 10th in 2005, though its passenger numbers peaked at almost 48 million in 2007. In 2006, America West was the airport’s second biggest carrier transporting over eight million passengers, but following its merger with US Airways, the number of passengers transported by that carrier has fallen from just over 10 million in 2007, to just two million in 2012. 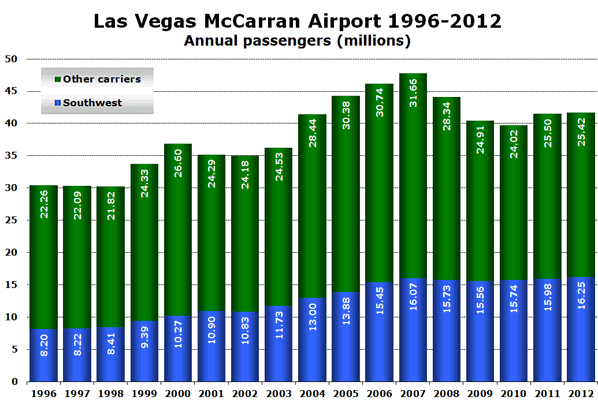 Southwest Airlines has for many years been the biggest airline serving McCarran, and has seen its share of the airport’s traffic rise from 27% in 1996 to almost 40% in 2010. Last year, Southwest handled over 16.2 million passengers at McCarran, its busiest year ever, with its wholly-owned subsidiary AirTran Airways, serving an additional 400,000 passengers. For some years, Las Vegas was Southwest’s busiest airport, but it has now fallen to second place behind Chicago Midway.

In the first seven months of 2013 McCarran has handled 24.42 million passengers, up just 0.03% on the corresponding period in 2012, though last year contained an extra day due to February having 29 days. The airport’s all year round appeal results in a relatively flat seasonality profile, and a SVID (Seasonal Variation in Demand) score of just 0.45 (“Excellent”), a better result than that achieved by either Los Angeles (0.96) or San Francisco (1.17). 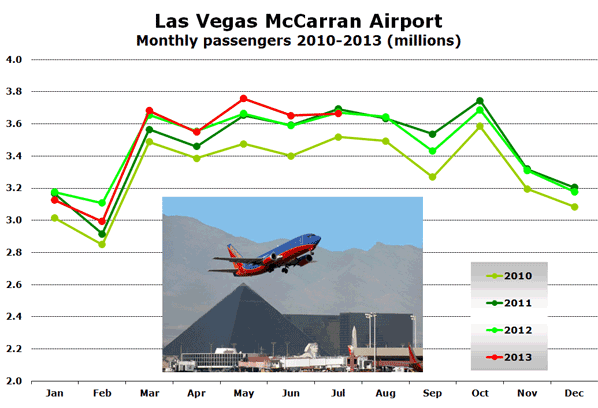 With over 16 million annual passengers, Southwest is by far the biggest airline serving McCarran. Delta Air Lines is still just beating United Airlines into second place, though both carriers saw passenger numbers fall slightly at McCarran last year. US Airways has dropped from fourth to sixth, and may be passed by Spirit Airlines in 2013. Spirit was the fastest-growing major carrier at McCarran last year, increasing its passenger throughput by over 70%. For Allegiant Air, who now rank fifth overall with almost 2.3 million annual passengers, Las Vegas is their single biggest base of operations, offering non-stop flights to over 40 domestic destinations. 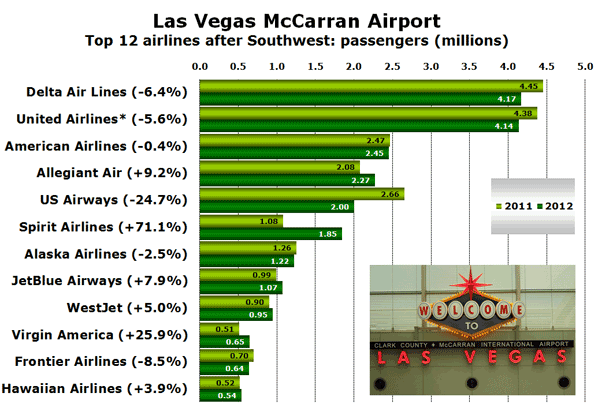 Since the beginning of the year, McCarran Airport has welcomed 13 new services from eight different airlines. Southwest (with five new services), and Spirit (with two) were the only carriers to launch more than one new service so far this year. Of the 12 destinations involved (Baltimore/Washington had two carriers starting to serve the route), five were not served by any other carrier, including both Mexican routes to Monterrey and Puerto Penasco.

At the start of the winter season Air Canada rouge will replace Air Canada on the Toronto route, Allegiant will launch its first route to Austin in Texas, and Alaska Airlines will commence flights to Anchorage in Alaska. For 2014, the airport is already aware of plans by Allegiant to start its first international services (to Hermosillo and San Jose del Cabo in Mexico in June), Air Canada rouge will replace Air Canada on flights to Montreal in March, and Edelweiss Air will introduce weekly flights to Zurich in May.

Nevada’s only other significant airport is Reno-Tahoe International Airport, where Southwest is again the leading carrier, accounting for just over half of all passenger traffic in 2012. Passenger numbers at the airport have fallen in recent years from over five million in 2007, to less than 3.5 million in 2012. According to the airport, a soft snowsports season coupled with slow convention traffic contributed to this decline of just over 7% in 2012. However, in the first seven months of 2013 the trend has been reversed somewhat, as passenger numbers are up 1.1% to 2.07 million. 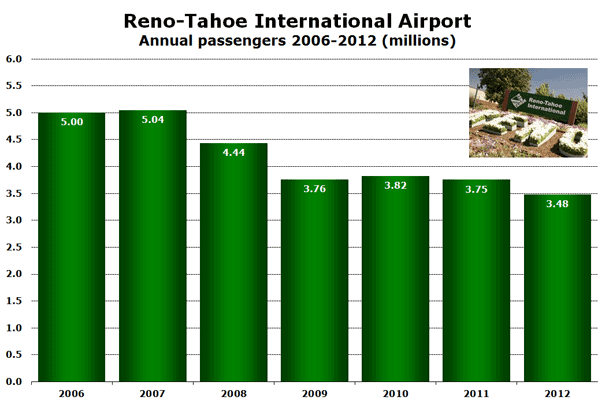 Since the beginning of the year the airport has welcomed new twice-weekly services from Allegiant to Bellingham (from 6 June 2013), Las Vegas (from 1 February 2013) and Oakland (from 30 August 2013). Southwest launched a seasonal daily service to Ontario in California on 6 January, but this ended in early March. It has also dropped service to Oakland and Salt Lake City during the last 12 months. Looking forward, in early November, Alaska Airlines will resume daily flights to Portland, Oregon using Horizon Air’s 76-seat Q400s. The carrier previously served this market until mid-May 2009.

Limited scheduled flights from other airports in Nevada

The only other scheduled services operated from airports in Nevada are a 19-times weekly service from Elko (EKO) to Salt Lake City in Utah, operated by SkyWest Airlines on behalf of Delta using 30-seat Embraer Brasilias. Ely Airport was, until recently, served by Great Lakes Aviation, through an Essential Air Service (EAS) agreement, with six-weekly flights to Las Vegas using 19-seat Beechcraft 1900Ds. This service ended on 31 March 2013, and no further flights are planned.