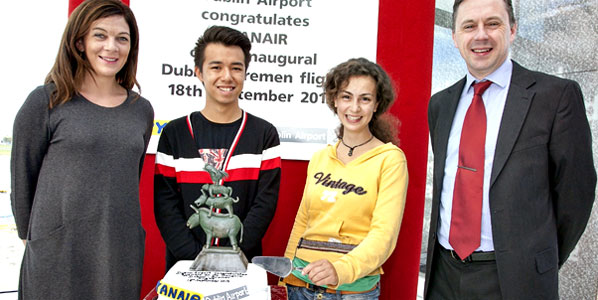 Ryanair’s Sales and Marketing Manager for the UK and Ireland Maria Macken and Dublin Airport’s Head of Market Intelligence Mark Evenden share a piece of the fantastic route launch cake with Ziv Mok and Rahel Sutterluetti, two Bremen-bound passengers on the inaugural flight from Dublin. The cake features Bremen’s most famous monument — the Town Musicians of Bremen — from the Brothers Grimm folktale. Passengers arriving in Comiso in Sicily from London Stansted were presented with a special bar of chocolate produced in the nearby city of Modica. President of SOACO Rosario Dibennardo (left) welcomes the first passenger (centre), along with Mariella Malandrino SOACO Board Member (right).